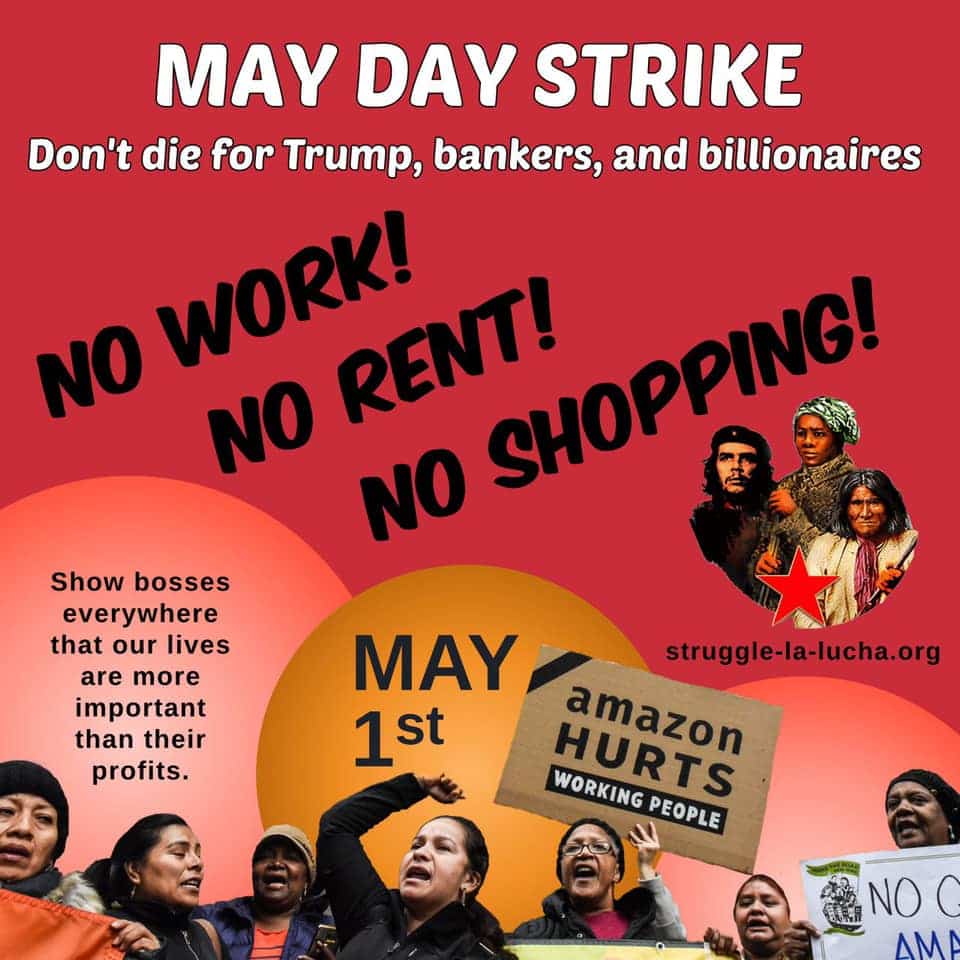 When the workers of the world awaken on May 1, 2020, they will confront a global situation that is very different from just a year ago.

Then, the latest capitalist crisis was only taking shape. Now, the U.S. and global economy are in free fall. The rapid collapse, rooted in the periodic capitalist crisis of overproduction, is spurred on and compounded by the deadly Covid-19 pandemic. In the U.S. alone, over 26 million workers lost their jobs in a mere four weeks, with more to come.

As oil prices plummet and stock markets roil, the danger of war — including world war — grows. Today, U.S. warships sail in the South China Sea as Trump escalates threats to the People’s Republic of China. Iran is threatened with attack for defending its own territorial waters, while Venezuela faces the danger of invasion on phony drug trafficking charges. U.S. sanctions are exacerbating pain and misery around the globe. With Congress’ help, Trump has expanded drone assassination and other war crimes that ramped up under the Bush and Obama administrations.

Here at home, workers are falling ill in large numbers as bosses and federal, state and local governments fail to provide them with adequate safety measures and personal protective equipment (PPE). The toll is being felt not only in hospitals, Amazon warehouses and grocery stores, but increasingly in meat-processing plants in the South and Midwest.

The specter of fascism hovers over state capitols with a wave of armed, white supremacist, anti-worker demonstrations egged on by the White House with funding from Big Capital. Meanwhile, in Democratic-led big cities like New York, social distancing orders are used to further criminalize Black and Brown communities. Trump and other right-wing demagogues are fueling racist attacks on Asian people with xenophobic conspiracy theories aimed at China.

But resistance is growing! Workers are walking out to demand PPE, health care and paid sick time, and gaining wide support and solidarity. Workers are learning how truly essential they are to society’s basic functioning after decades of being told they are inconsequential or even a “disappearing” class. Car caravans across the country are demanding the release of our class siblings held in the racist U.S. prison system and migrant detention centers, among the worst incubators for disease.

On May Day 2020, there is a new symbol of hope and renewal of the class struggle: health care workers in masks and scrubs facing down armed white-supremacist mobs calling to “reopen the economy” on behalf of the bosses, from Denver to Harrisburg, Pa., and Phoenix. Wherever possible, class-conscious workers should join these heroic health care workers’ anti-fascist counteractions, while exercising all necessary precautions to protect the safety of our families, communities and co-workers.

Trump and Wall Street, under the slogan of “open it up,” are manipulating small business owners and utilizing white supremacist and fascist groups to drive workers back to unsafe conditions, threatening the well-being of entire communities.

This is a textbook example of how capitalism uses fascist movements, built on the backs of small businesses and the middle class, against the workers in periods of deep crisis. Small business owners need to see the hypocrisy involved in these maneuvers. The big banks and billionaires have siphoned off billions of dollars in aid. The bipartisan “stimulus plan” is aimed not at helping mom-and-pop businesses, or for that matter workers, but rather bailing out the super rich.

But the rottenness of capitalism is exposed as never before. The wealthiest country on earth has proven unable to provide even the bare minimum of public health and relief to the masses. Meanwhile, the most essential workers for the life and health of the population are shown to be among the lowest paid and most oppressed, disproportionately Black, Latinx, Arab, Indigenous and Asian, women and LGBTQ2S, and migrants.

We demand that the grotesque Pentagon war budget and Big Business profits be seized to provide a guaranteed income, health care and housing for all — including immigrants, regardless of legal status! We need to cancel rent, mortgage and debt payments! No evictions or utility shut-offs. Water and food are rights for all.

Our movement must fight against all forms of racism, including the anti-China propaganda that has led to violence against Asian people. We must fight to release those locked in jails and detention camps and oppose the disproportionate number of deaths in Black, Brown and poor communities. All deportations and Immigration and Customs Enforcement (ICE) proceedings must be stopped.

The government tosses us crumbs because we don’t own the means of production that have been created with our labor. It’s time for the workers and oppressed to take the reins of society in our own hands and reorganize it from top to bottom based on people’s needs, not profits. While revolutionaries and socialists have utilized bourgeois elections as an arena of struggle, history has shown us that it takes a mass workers’ movement, prepared to resist and fight for power and liberation.

Capitalism can’t be reformed to meet the enormous challenge of economic crisis, climate collapse and pandemic. No, it’s up to us to organize ourselves and build a movement to fight for political power through mass mobilization, workplace organizing and other avenues of struggle — a truly revolutionary movement for socialism.

In 1989, Cuban President Fidel Castro declared, “Socialism or death!” It was true then for Cuba, and it is true now for the workers of the whole planet. Let’s put capitalism where it belongs at last: in the trash bin of history!