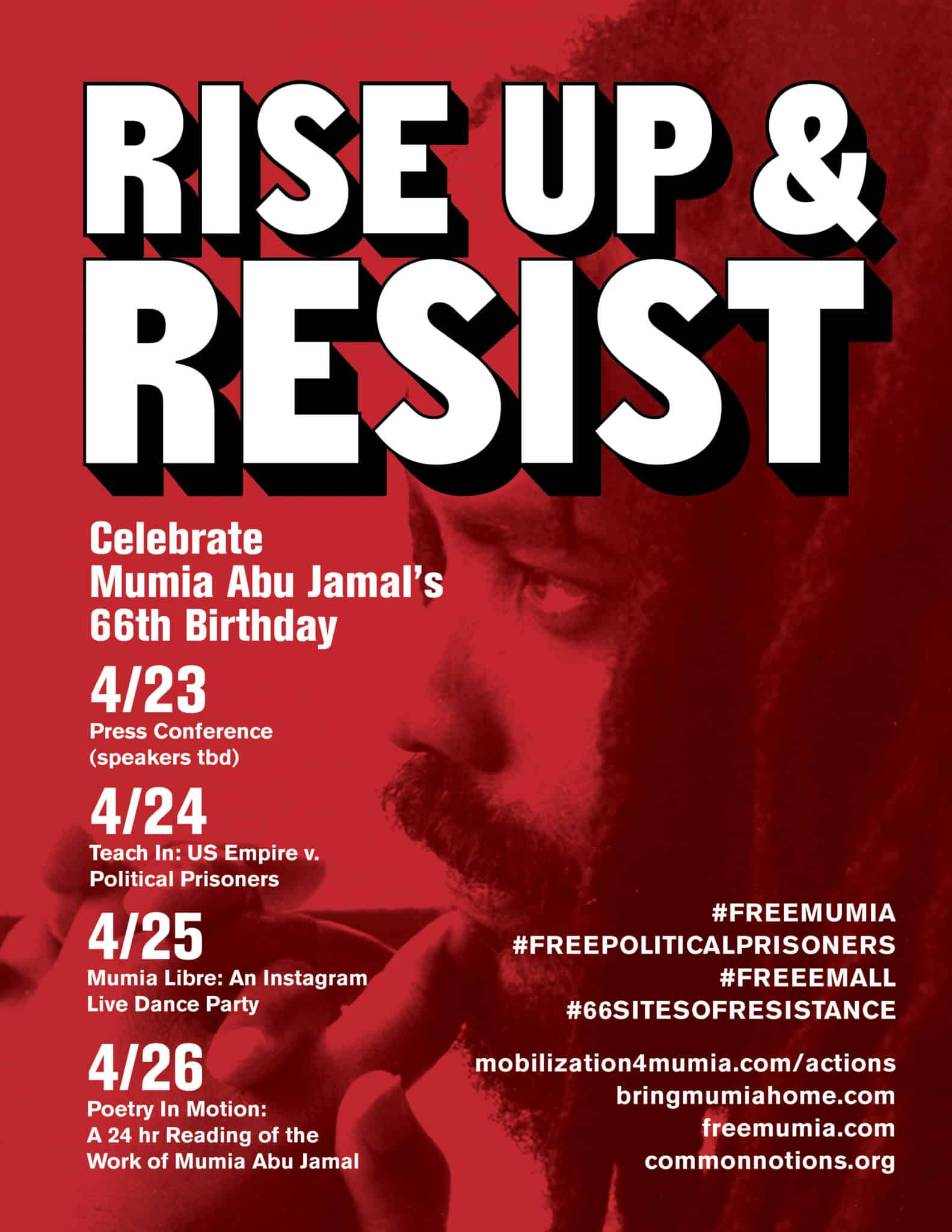 All of us, every one of us, when we fight, we win. So let us fight together. Never forget the love for each and every one of you for the remarkable work you have done and we have done together, so let’s get together. Let’s make it happen.

Message to my supporters from Mumia Abu-Jamal – April 24, 2020
Recorded by Noell Hanrahan from Prison Radio

In March and April, there were several conference calls about the next steps that need to be taken in the campaign to free Mumia Abu-Jamal and all political prisoners in the midst of the COVID-19 pandemic.

It’s imperative to obtain the release of all prisoners now. The growing movement has to put maximum pressure on officials to make this release happen.

As explained in a recorded message by Ivan Kilgore, an inmate in the California Department of Corrections, on Prison Radio:

“All it takes is for one person to walk into this environment and you have a crisis on your hands. It is not so much getting it from prisoners, it is getting it from the correctional staff.”

When asked, “If you start feeling COVID symptoms, how long would it take for you to see a doctor?” Kilgore responded, “The problem with that amongst prisoners is they would be afraid to report that because it would automatically result in them being isolated in the hole.”

Inmates have very few personal hygiene products or other means of sanitizing, don’t have adequate medical care, and, most importantly, they are not able to practice social distancing — which makes jails, prisons and detention centers death traps for prisoners, staff, the surrounding community and connected communities.

The International Concerned Friends and Family of Mumia Abu-Jamal, Mobilization4Mumia, the San Diego Coalition to Free Mumia and All Political Prisoners, Bring Mumia Home, On a Move, Workers World Party, the Socialist Unity Party, the Peace and Freedom Party, the African People’s Socialist Party, Saigon Penn Cop Watch, All of Us or None, Unión del Barrio, Black Lives Matter, the Black Alliance, De-incarcerate Pennsylvania, the American Indian Movement (AIM,), the International Leonard Peltier Defense Committee (ILPDC), the Abolitionist Law Collective, Amistad, Release Aging People in Prison (RAPP) and the Prison Solidarity Committee are some of the many organizations that are involved in the movement.

On April 15, there was a social media Twitter storm, emails and phone zaps to Gov. Tom Wolf of Pennsylvania, all day, to get the word out.

This movement alarmed the Pennsylvania Department of Correction officials. One of the supporters participating in the “phone zap” was falsely told that Mumia was hospitalized with COVID-19 symptoms. This scared many supporters, as the message spread around the world, because Mumia’s health makes him at high risk from dying from the virus. This was a cruel thing to do. Many supporters called the DOC demanding to hear from Mumia himself.

On the morning of April 16, Prison Radio released a recorded phone conversation of Mumia with Pam Africa and other members of the Friends and Family of Mumia Abu-Jamal, where he thanked everyone for checking on him and caring about him and assured everyone that he is okay. Mumia said, “What I need is freedom.”

Committees met to plan and organize the weekend of events. All of the events were going to be held on line, using social media, Zoom, Facebook and YouTube as the media. This type of international mobilization has never been done before. The technology team would be key to all of the events.

The first event was an April 23 news conference. Included were two of the leading organizers, Pam Africa and Santiago Alvarez, a graduate student at University of California-Santa Cruz. Professor Linn Washington, Janine Africa and New York State Assembly member Charles Barron were among the speakers at the news conference and teach-in. The news conference was a success with hundreds of people signing on and participating.

On April 24, a teach-in featured over 20 speakers from across the U.S. and around the world, including political prisoners and former political prisoners. The speakers included Marc Lamont Hill, Fred Hampton Jr., Sekou Odinga, Janet Africa, Rasheed Johnson, Susie Abulhawa and Angela Davis. The Zoom hosts were Johanna Fernandez, Betsey Piette, Sophia Williams, Santiago Alvarez and Michael Africa Jr., son of Mike Africa of the Move 9. The teach-in was a success with over five hundred people listening in.

On April 25, there was a virtual dance party with DJs and music.

The finale on April 26, “Poetry in Motion,” started at noon, a 24-hour celebration of Mumia. It included Mumia’s audio commentaries and slideshows, music and live videos, and birthday messages from individuals who shared experiences meeting and learning from Mumia. Organizations sent messages of solidarity from all over the world. Also shown was the story of the Move 9 and the Move Organization. Mumia’s commentaries covered prisons, sports, the environment, art, history, politics, May Day and other issues.

Mumia is an amazing journalist. His commentaries, along with his books, should be required supplemental reading for high school and college students.

Thank you Mumia for your 39-plus years of journalism. Thank you, Noelle Hanrahan and Prison Radio for recording and posting Mumia’s commentaries. Thank you to all the organizers and those who contributed to this amazing five-day celebration of Mumia Abu-Jamal. Speaking truth is power!