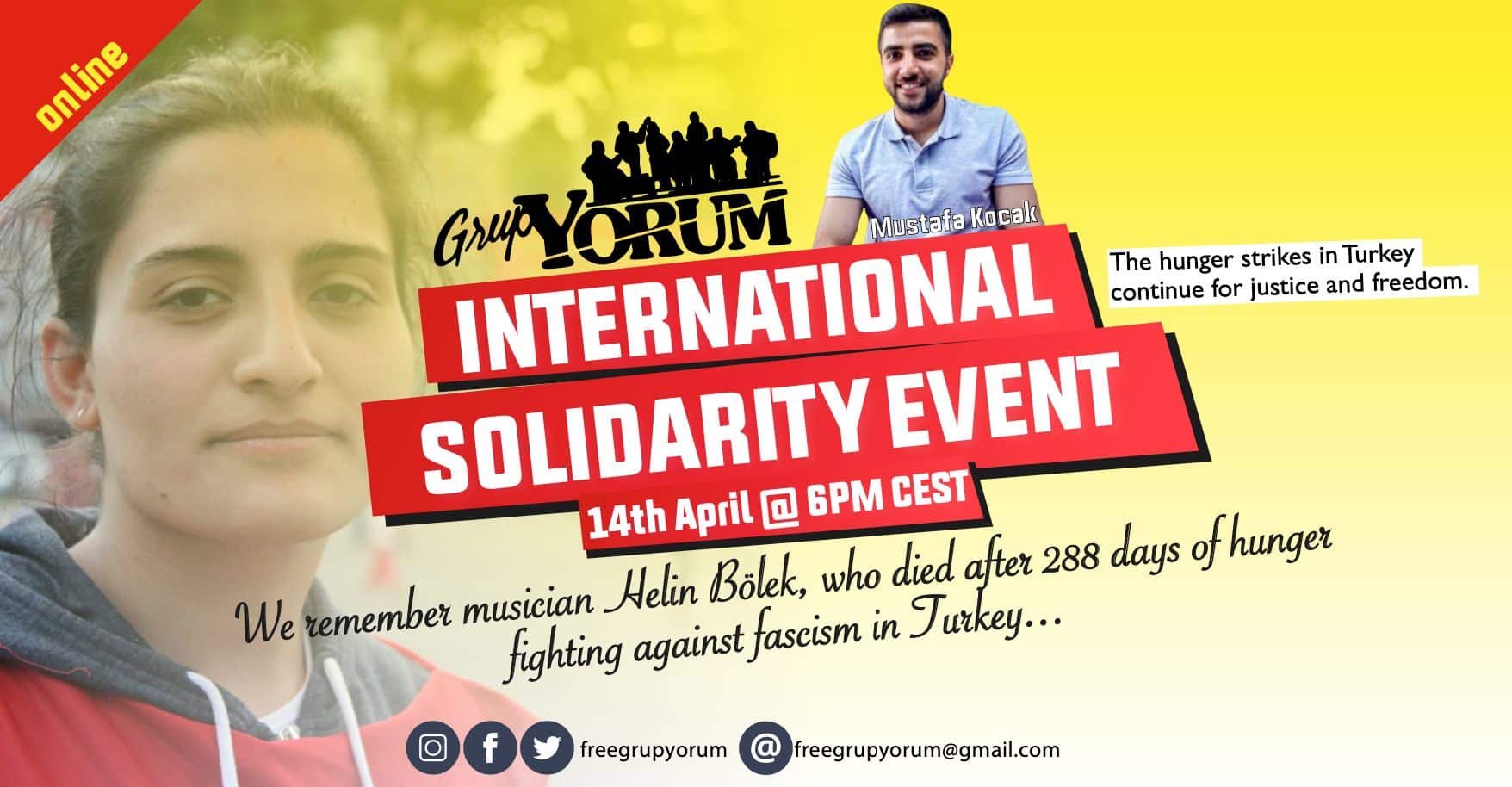 Online (Link to be shared on the day)

On Tuesday, 14th April 2020 an ONLINE EVENT by the Grup Yorum Solidarity Committee on international level will take place 6.00 pm. (CEST) for the demands and lives of Mustafa Kocak and Grup Yorum guitarists Ibrahim Gökcek.

We will commemorate Grup Yorum singer Helin Bölek, who was immortalised in her resistance on the 288th day of death fast.

The ongoing repression, crimes of the government in Turkey against the whole opposition and especially against prisoners didn’t stop during the “corona crisis”, rather the AKP government tries to take advantage of the silence and restrictions towards the masses.

The resistance has reached a very critical state, as the death of the musician Helin Bölek showed to us.

We shall be many thousands people participating in this event and also showing our direct reaction, shouting from one mouth the demands of the resisters! We can really manage to break through the wall of ignorance and silence! Let’s be ONE POWER on 14th April, Let’s BREAK THE SILENCE!”

Online Link will be shared Monday!

What are they fighting for?
MUSTAFA KOCAK is ready to give his life in the struggle against injustice and corruption of the jurisdiction. He wants a fair trial and the end of policy of traitors and police informants. Because in Turkey, already around 300 persons, who are involved in the democratic struggle against the fascist rule of the state, were put in jail only because of the false statements of a person called Berk Ercan. He offered himself to the police in order to escape repression and served police to get rid of political dissidents. The police tortured many people to make statements against other. Mustafa denied and was tortured for weeks. He was punished by this politics for crimes he didn’t commit.
But he resisted and continues to protect his human dignity.
Mustafa suffers incredible pain, can’t sleep, can’t walk and even stand up anymore, has bruises all over the body from forced intervention and torture. And all he says is: “The pain is very strong, I can’t sleep due to the pain. My whole body is burning.. Yes the pain is very big, its unbearable, but nobody shall suffer this pain again in connection with justice.. I’m ready for this pain. I sustain, so the pain won’t remain until tomorrow”!

Grup Yorum
The music group exists since 1985 and already published 23 albums. The AKP regime wants to completely destroy opposition and all revolutonary potential which can mobilise the masses. Of course, Grup Yorum is the biggest and most popular group, who can bring 1 million people or more to the concerts. And their motto is socialism, independence, freedom, solidarity and unity among the people.
The songs of Grup Yorum unite people of all colors and beliefs, its not deviding but uniting. This is, what the state in Turkey fears.
Since a few years all concerts and cultural activies are banned, members of the group are arrested. Their cultural center was raided and completely destroyed with all instruments several times within 2 years.
There are still 5 members of the group in prison, also with statements of police informants. The group started a hunger strike to fight this repression and finally 2 members began with death fast.
Just to sing their songs freely, to get freedom and justice, Helin Bölek was hungry for 288 days and she was immortalised due to the fascist politics of the state. Ibrahim has reached the 300th day of his death fast.

MUSTAFA KOCAK AND IBRAHIM GÖKCEK MUST LIVE!
WE CAN DO IT TOGETHER!