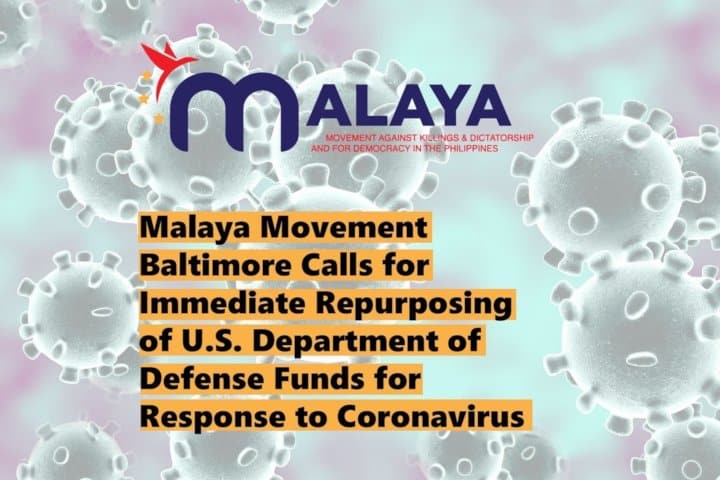 Although the United States federal response to the coronavirus pandemic seems inadequate and purposefully misleading, it pales in comparison to the response of the Philippines government. Instead of immediate measures to provide adequate care, Philippine President Rodrigo Duterte has mobilized the military and police, especially in urban areas, to enforce a lockdown on the entire island of Luzon.

The Duterte administration has deployed 40,000 military and police to set up checkpoints in all of Luzon — a policy that is not only ineffective in combating and containing Covid-19, but worsens the already difficult economic and social conditions that the people of the Philippines face. While self-quarantine and social distancing are necessary measures to limit the spread of a disease, it is not possible for the majority of the Filipino people, who struggle for regular income, decent housing and adequate health care. Military checkpoints only serve to delay and prevent the majority of Filipino people from making their livelihoods — three out of five otherwise employed people in Luzon will lose wages due to the lockdown.

Making matters worse, the Duterte administration made massive cuts to public health for the 2020 budget. For example, the budget for the Epidemiology and Surveillance Program was cut by more than half of its original budget: from Php262.9 million in 2019 to Php115.5 million in 2020. The budget for the Health System Strengthening Program was also cut by Php6 billion in 2020. These are funds that could have been used to provide adequate hospitals, quarantine facilities and health care workers. Instead, the Duterte administration has enforced de facto martial law on the entire island of Luzon.

But why raise the situation in the Philippines amidst a crisis here in the U.S.? The answer is simple: the U.S. government can take immediate action to simultaneously release funds for public health measures and address the humanitarian crisis in the Philippines by completely cutting funding to Operation Pacific Eagle.

President Donald Trump’s fiscal year 2020 defense budget dedicates $72.3 million to Operation Pacific Eagle. Operation Pacific Eagle, previously known as Operation Enduring Freedom, is a Department of Defense program that sends millions of dollars in police and military aid every year to the Philippines government. The Department of Defense claims that this aid is for the battle against ISIS in Mindanao, but in reality, it is the police and military who have carried out more than 27,000 extrajudicial killings since Duterte’s election.

Cutting off U.S. police and military funds to the Philippines government would effectively curtail the Duterte administration’s militarized response to Covid-19 and force a public health-based response. Freeing up those funds in the United States federal budget would allow them to be repurposed for a robust medical response to our own Covid-19 crisis.

Stop the killings in the Philippines!

Health care is a human right!