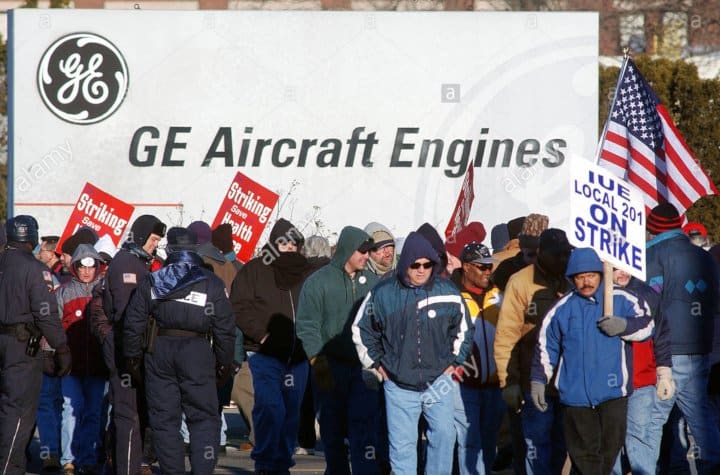 Few tears were shed in Schenectady, N.Y., when former General Electric CEO Jack Welch croaked on March 1. Why should there have been? Welch destroyed 22,000 jobs in GE’s hometown in the 1980s.

Thousands of workers were also fired at Louisville’s 900-acre Appliance Park Complex, now owned by Haier. Around 112,000 workers were fired during Welch’s 20-year reign of economic terrorism from 1980 to 2000, according to Thomas F. O’Boyle, author of “At Any Cost: Jack Welch, General Electric, and the Pursuit of Profit.”

GE workers called Welch “Neutron Jack” because he destroyed people’s jobs while leaving the factories intact. That’s what the neutron bomb was supposed to do: kill people with radiation while leaving the buildings standing.

Welch argued that, “ideally you’d have every plant you own on a barge.” He wanted factories that could be moved to wherever the lowest wages and the least environmental regulations could be found.

Welch fought against cleaning up the Hudson River after GE poured 1.3 million pounds of cancer-causing polychlorinated biphenyls (PCBs) into it. On Earth Day in 1998, Welch declared to stockholders that “PCBs do not pose adverse health risks.”

Like his friend Donald Trump, Jack Welch was a sexist pig.  According to O’Boyle, a former Wall Street Journal reporter, Welch asked a woman being interviewed for a job at GE Plastics in 1973, “Would you f — k a customer for a million-dollar order?”

Instead of being prosecuted, Welch in retirement had a $750 million fortune. (Boston Magazine, May 15, 2006) His corpse should be sharing a jail cell with Harvey Weinstein.

Welch’s viciousness made him a role model for other executives like “Chainsaw Al” Dunlap, who fired 11,000 workers in 1995 at Scott Paper and then attempted to get rid of half of the workers at Sunbeam.

Fortune magazine named Jack Welch “manager of the century.” Welch got a $7 million advance for his memoirs, which were elegantly titled “Jack, Straight From the Gut.”

Donald Trump was a big admirer of Jack Welch, who had a crib in Manhattan’s Trump Tower. Both thought that capitalist climate change was a hoax. Welch called global warming “a mass neurosis” that was “an attack on capitalism” on MSNBC’s “Morning Joe” program. (July 2, 2008.)

After Jack Welch departed for the big electric toaster in the sky, his best buddy in the White House said “there was no corporate leader like ‘Neutron Jack.'”

Reagan busted the PATCO union of air traffic controllers, slashed social services, waged a dirty war against Nicaragua and invaded Grenada. Welch fired over 100,000 workers and super exploited at least as many in Asia and Latin America.

Welch strove to reap monopoly profits by GE remaining only in those industries where it held the first or second position. Any other product lines — and the workers employed there — were ruthlessly discarded.

Welch also turned GE into a bank. By 2007, 55 percent of GE’s profit came from its loan sharking arm, GE Capital. (Fortune, May 24, 2018) But none of these methods could save GE from the anarchy of the capitalist marketplace.

Chickens came home to roost during the 2008 capitalist economic crisis. GE was bailed out by the Federal Reserve with a $139 billion cheap loan.

Five million homeowners who were foreclosed weren’t so lucky.

Many stock speculators now consider GE to be toast. From being called “the manager of the century,” Jack Welch became another fallen idol to study in the business schools. But it was workers and their families who paid for Welch’s crimes.