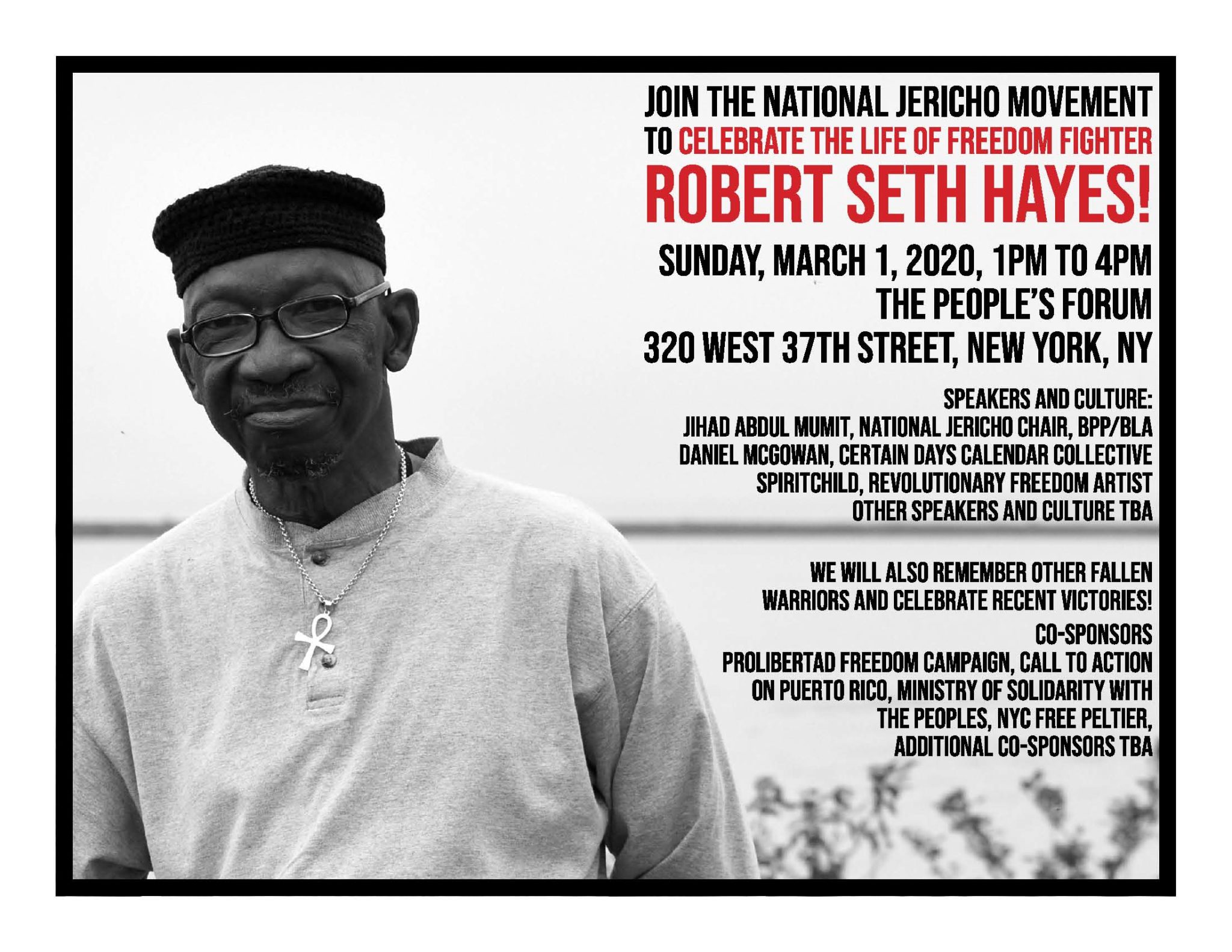 Robert Seth Hayes was a freedom fighter who fought for all Black and oppressed people. The Black Panther Party and the Black Liberation Army member passed away last year on Dec. 21.

Hayes was a grandfather and political prisoner who spent 45 years in New York prisons until he was finally released in July 2018. On March 1, the People’s Forum in midtown Manhattan was filled with his comrades, friends and supporters to honor his memory.

The celebration of Hayes’ life was called by the National Jericho Movement for Recognition and Amnesty for All U.S. Political Prisoners. Co-sponsors were the ProLibertad Freedom Campaign; Call to Action on Puerto Rico, Holyrood Church Ministry of Solidarity with the Peoples; and NYC Free Peltier.

Claudia de la Cruz, executive director of the People’s Forum, welcomed people to the tribute. She reminded the audience that it was the 66th anniversary of when the Puerto Rican liberation fighters Lolita Lebrón, Rafael Cancel Miranda, Irvin Flores Rodríguez and Andres Figueroa Cordero attacked the U.S. House Representatives on March 1, 1954.

Messages were read from political prisoners David Gilbert, Russell Maroon Shoatz and Leonard Peltier. Gilbert, who had been locked up with Hayes, mentioned how Hayes would work in the tiny garden that prisoners were allowed to care for.

Russell Maroon Shoatz has been incarcerated for 48 years, including 22 years in solitary confinement. Shoatz described how Hayes experienced a lot of suffering but was known for his smile.

Anne Lamb, of the NYC Jericho Movement, spoke of how prison authorities “spent 20 years trying to kill Seth.” They refused to provide adequate medical care for Hayes, who developed hepatitis C and diabetes as a result. Hayes lived just 17 months after being released.

Shoatz’s daughter, Teresa Shoatz, said her father had stage 4 cancer, a condition that could have been prevented by earlier medical testing.

Leonard Peltier, a leader of the American Indian Movement, also wrote in remembrance of Robert Seth Hayes. Often described as the Nelson Mandela of Indigenous people in the U.S., Peltier is beginning his 44th year of imprisonment.

Mandela spent nearly 28 years in apartheid prisons. The jailhouse “democracy” of the United States has a worse record.

Robert Seth Hayes, Russell Shoatz and Leonard Peltier have spent more than 40 years in jail. So did Janet Africa, Janine Africa and Eddie Africa, who were in the audience. David Gilbert has spent nearly 40 years being locked up.

Pam Hanna, who was a comrade of Hayes’ in the Black Panther Party, described what a skilled person he was, including being a good cook. Hayes later conducted cooking classes for his fellow revolutionaries.

Cultural performances were given by Ngoma and SpiritChild. While Ngoma performed “Music for My Soldiers,” people shouted out names of political prisoners.

Brother Shep, a Black Panther Party veteran, offered a painting of Robert Seth Hayes. Ksisay Sadiki spoke of her father, Kamau Sadiki, a veteran of the Black Panther  Party and the Black Liberation Army who has been sentenced to life imprisonment.

A statement was read from the prison branch of the Popular Front for the Liberation of Palestine mourning Robert Seth Hayes. Former political prisoner Daniel McCowan, who had been associated with the Earth Liberation Front, spoke about Hayes. McCowan represented the Certain Days Calendar Collective, which produced a beautiful calendar featuring dates of revolutionary history.

The national chair of the Jericho Movement, Jihad Abdulmumit, stressed the need to reach out to people. He urged the audience to engage in “critical thinking” in how to broaden the struggle to free all political prisoners.

A frequent call during the meeting was “What’s the call? Free them all!” Long live the memory of Robert Seth Hayes!