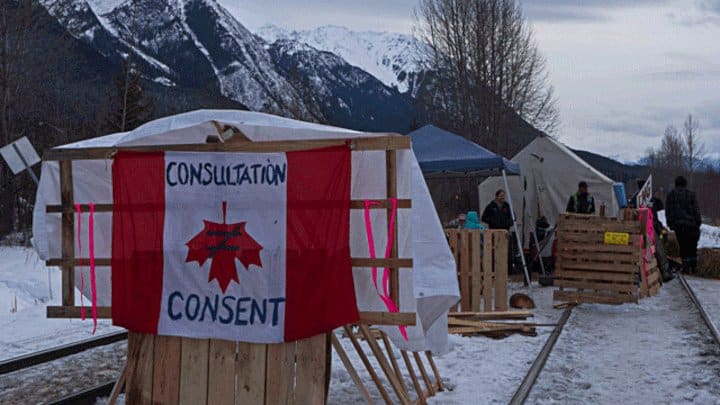 Gitxsan Chief Spookwx put on his hereditary chief’s regalia as he prepared to be arrested on Monday night.

Around the campfire that burned on CN Rail tracks, he told those present that he, as hereditary house chief, was prepared to be arrested.

“I told them they could just step aside and I would get arrested,” said Spookwx, whose English name is Norman Stephens.

“But there were a number of people that stepped up and said they were going to stand with me and they were willing to get arrested. I did not expect them to do that.”

The RCMP then moved in and arrested 14 at the rail demonstration near New Hazelton, B.C., he said.

Two other Simogyet, or Gitxsan hereditary chiefs, were among the arrested: Gwininitxw (Yvonne Lattie) and Dawamuxw (Larry Patsy).

This was one of several actions that erupted after Ontario Provincial Police (OPP) enforced an injunction near Tyendinaga Mohawk Territory, partway between Ottawa and Toronto.

OPP officers showed up Monday morning and gave the Kanien’kehà:ka (Mohawk) there a last chance to leave camps set up adjacent to the tracks. A standoff ensued.

Video streamed live to Facebook by Real Peoples Media showed the leadup to these arrests.

“What did your ancestors do when they got sick and 90 per cent of them died? They violated their treaties. They stole. They killed. But they did it when we were sick. F**k off. I’ll stand where I want. I’m on Onkwehón:we territory. Yeah, me.”

The arrests followed. Those who were not arrested backed off as police remained standing in a line by the tracks.

After seeing this, Spookwx decided it was time for the Gitxsan solidarity blockade to go back up. It was voluntarily dismantled on Feb. 13, a week after RCMP enforced an injunction against Wet’suwet’en hereditary chiefs and their supporters on the Morice West Forest Road on Wet’suwet’en territory. Twenty-eight were arrested in those operations.

“I just walked into my store here and announced that we were going to have to go back because they had invaded the Mohawks.”

“The Gitxsan Nation could no longer sit back. We had to do something. We had to show the other nations that the Gitxsan were willing to step back up. We couldn’t leave it to just the Mohawks to resist and take those arrests. I decided to go back on the tracks.”

Spookwx said they paused the Gitxsan solidarity action as a show of good faith. Discussions were in the works for talks to happen between Gitxsan and Wet’suwet’en hereditary chiefs with federal and provincial governments.

Other demonstrations also restarted and new ones flared. Some continued uninterrupted on Tuesday.

VIA Rail said it expects to resume running its Montreal-Halifax route on Friday. As of Monday, 24, 789 trains were cancelled and 138,000 passengers affected, VIA stated.

CP obtained an injunction Tuesday to end the demonstration.

Quebec also obtained an injunction to get people off tracks on Listuguj First Nation territory. This demonstration has continued for near three weeks.

About 300 people blocked access to the B.C. legislature on Monday. A small group remained overnight in defiance of an injunction.

Hamilton police served an injunction to a new rail blockade on Go Transit tracks in Ontario. This action halted trains in a busy commuter corridor between Hamilton and Niagara Falls. It has not yet been enforced.

At the New Hazelton site, Chief Spookwx said his people responded to their chiefs’ arrests by blocking Highway 16, the main route through the region, until about 3:30 a.m.

All 14 people who had been arrested were then released by the Mounties.

“Doing the music. Playing the drums. They had told the police that they were going to stay there until the chiefs were released, all the people who were arrested were released.”

“I’m very proud of my nation for standing up like that, and I’m wishing that they stand strong and continue the battle, because the underlying issue here is our title and rights, our title and rights that just got violated last night by the RCMP coming onto our territory,” he said of what transpired.

“We’ve been here for over 10,000 years. Canada has been here for 152 years. Their laws cannot supersede us. The ruling in Delgamuukw was that our title and rights have not been extinguished. They still exist,” he added.

Status of the proposed talks

Delgamuukw was a landmark 1997 Supreme Court of Canada decision that was brought forward jointly by Gitxsan and Wet’suwet’en hereditary chiefs.

The Wet’suwet’en point to Delgamuukw when they say they have jurisdiction over the traditional lands.

Hereditary chiefs oppose construction of the 670-kilometre Coastal GasLink pipeline. It would carry fracked natural gas from Dawson Creek, B.C. to a liquification facility near Kitimat, where it would be shipped to markets in Asia.

The hereditary chiefs and their supporters erected camps and checkpoints along the disputed forest road.

The Tyendinaga Mohawks said they would dismantle their camps voluntarily if the RCMP left that disputed territory.

The chiefs issued that same demand and one other before they would meet for nation-to-nation talks: for Coastal GasLink to cease work on its proposed pipeline.

“Again, the importance is to discuss with those chiefs what the measures are with respect specifically to the de-escalation of the RCMP community centre” on the road’s 29-kilometre mark.

RCMP has pulled back to Houston, B.C., but they plan to continue patrols of the area to ensure the road remains open.

Coastal GasLink said it would support the RCMP drawback “provided Coastal GasLink contractors and staff continue to have safe and secure access to work sites.”

The two demands are related. If Coastal GasLink will not withdraw, the RCMP have to ensure its workers get access to the road, according to the injunction.

The talks did not happen.

After stressing “dialogue,” Prime Minister Justin Trudeau declared on Friday that “the barricades must come down.”

The prime minister switched posture, he told the house of commons on Monday, “when it became clear that there was no reciprocal openness to dialogue from the Wet’suwet’en hereditary chiefs.”

In response, Chief Spookwx accused the RCMP of “dragging their feet.”

“They were not willing to move quickly at all.”

He accused Trudeau of being the one who was not negotiating in good faith.

“That was not a show of good faith on Canada’s part to go ahead and be making arrests while the preliminary talks.”