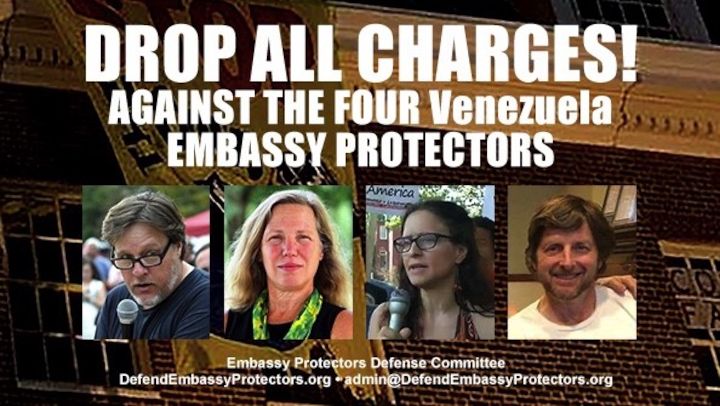 A hearing is set for Feb. 28 in Washington, D.C., concerning the trial of four U.S. citizens charged by the Department of Justice for protecting the Venezuelan Embassy from right-wing political opponents to the sitting, elected president, Nicolás Maduro. In a blow to the Trump administration, the initial attempt to prosecute ended in a mistrial on Feb. 14.

Who the real president of Venezuela is, is the legal “elephant in the room.” The four defendants — Kevin Zeese, Margaret Flowers, David Paul and Adrienne Pine — along with other activists, protected the Venezuela Embassy for 37 days with full permission of the elected Venezuelan government led by Nicolás Maduro. Maduro is the sitting president, recognized by the United Nations and other international bodies. However, the Trump administration fails to recognize Maduro, and instead anointed National Assembly member Juan Guaidó as president in January 2019, even though he has never won or even entered a presidential election.

“The Trump administration, like the Obama and Bush administrations before it, has continued to interfere in Venezuela’s elections, most recently by helping to fund the right-wing failed coup attempt with Juan Guaidó,” said Ajamu Baraka, co-chair of the Venezuelan Embassy Protectors Defense Committee.

Baraka continued, “A second trial raises the stakes for the Trump administration. The world is seeing the charade of a trial based on the false claim that Guaidó is president when he has not been president for one nanosecond and is no longer even the president of the National Assembly. A second prosecution will look vindictive and a second mistrial or an acquittal will be a blow to the failed coup, which is already on its last legs.”

“This was all a big, risky gamble,” said Oliver Stuenkel, professor of international relations at São Paulo think tank Fundação Getulio Vargas, of the move by foreign governments to replace Maduro with Guaidó. “Europeans, no matter how much they may deny it, have already started this process of getting back to business as usual with Maduro. Latin American countries will eventually have to do the same.”

“The jurors and the judge herself are also victims here,” said Baraka. “The fact that an anomaly of U.S. law allows President Trump to decide who the U.S. recognizes as a foreign leader despite the facts on the ground is a political decision the courts cannot overrule. The prosecution, by limiting the time to three days and not allowing the defense to present the full context of 37 days of their time in the embassy, led to confusion among the jury.”

After deliberating for more than 10 hours, more hours than the actual trial itself, the jury was hopelessly deadlocked and communicated to the judge that more time was not going to result in a unanimous decision. After instructing the jury to continue deliberating, the judge finally acknowledged the obvious and declared a mistrial, instructing the defense and prosecution to return to court on Feb. 28.

Donate to help the legal defense at DefendEmbassyProtectors.org.