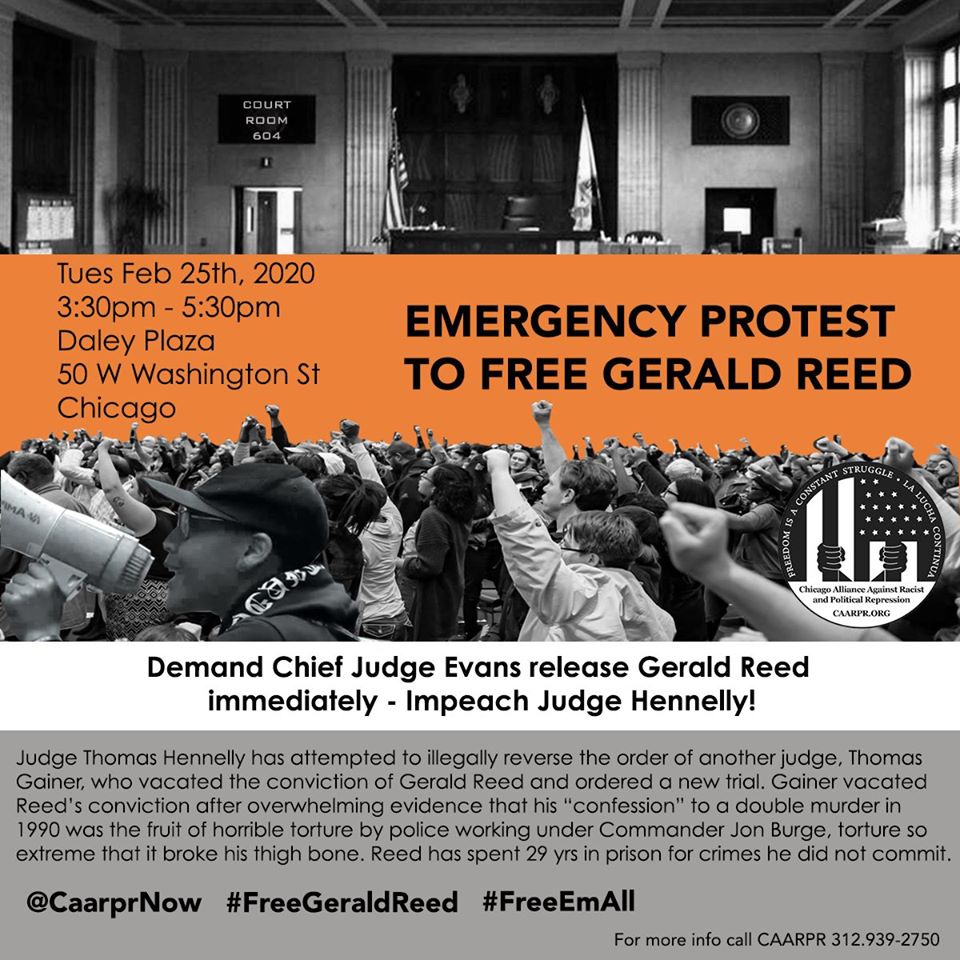 As well as committing to standing up for Gerald Reed on Tuesday Feb 25, heres what you can do to support Gerald Reed today?

1. Share this event with everyone you know, invite friends, loved ones, co-workers to go to the protest with you. Get on all your social networks spread the word, include #FreeGeraldReed #WeSupportGeraldReed #FreeEmALL

Judge Thomas Hennelly has attempted to illegally reverse the order of another judge, Thomas Gainer, who vacated the
conviction of Gerald Reed and ordered a new trial. Gainer vacated
Reed’s conviction after overwhelming evidence that his “confession” to a double murder in 1990 was the fruit of horrible torture by police working under Commander Jon Burge, torture so
extreme that it broke his thigh bone. Reed has spent 29 yrs in prison for crimes he did not commit.

The one hundred people packed into Hennelly’s courtroom on Friday February 14, 2020 were stunned when Hennelly announced his decision to send Reed back to Prison to serve a life term. Armanda Shackelford, Reed’s mother and a leader of the Chicago Alliance, responded in disbelief. “I never would have thought that this judge would do what he did today,” she said.

Judge Hennelly’s ruling on Feb 14th was unheard of. It was outrageous and a racist insult to Black and Brown communities.

Gerald Reed has gone through a seemingly endless process started by the Torture Inquiry and Relief Commission in 2012 . He’s been in prison almost 30 years. His evidentiary hearing regarding the torture he suffered at the hands of Jon Burge’s minions was conclusive. Judge Gainer vacated his conviction. By what right does Judge Hennelly think he can just undo this order.

Judge Hennelly had only two options: get on with a new trial or dismiss the case. He arbitrarily conjured up a third option that really doesn’t exist: he reversed judge Gainer’s order, sending Reed back to prison to serve a natural life sentence for crimes he did not commit.

Veteran courtroom observers say that Judge Hennelly’s action is unprecedented and illegal. A Circuit Court judge has no authority to reverse the decision of another circuit court judge.