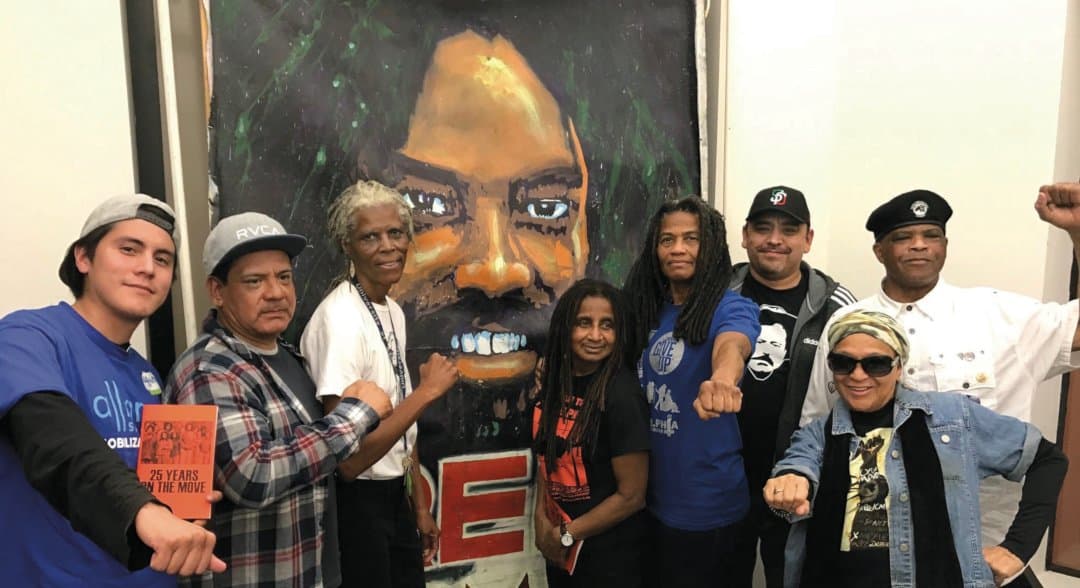 This trip to California was one of many “firsts” for Janine and Janet Africa, released on May 25, 2019—African Liberation Day—after spending over 40 years in prison. These courageous Black women, along with Debbie Sims Africa, released in June 2018, were the longest-held women political prisoners in the United States. Another MOVE woman, Merle Africa, died in prison under suspicious circumstances in 1998.

San Diego’s Black August Organizing Committee has held annual Black August events at the Malcolm X Library for the last three years, where we have discussed the case of the MOVE 9, researched, posted and viewed footage from the 1978 attack and the 1985 bombing, yet none of our previous discussions can compare to hearing the stories directly from Janet and Janine.

The San Diego Committee Against Police Brutality (SD-CAPB) has hosted birthday celebrations, educational forums and commemorations in April and December in honor and recognition of the “long distance revolutionary” Mumia Abu-Jamal for the last 20 years. We have had discussions, have shown video documentaries, and have read Mumia’s essays at local spoken-word events and student forums.

Mumia was an honorary member of the African American Writers and Artists and for many years his essays were read at AAW&A monthly meetings. Yet nothing can compare to hearing the voice of Pam Africa — who has spent 38 years fighting for Abu-Jamal’s freedom — speak about how she met Mumia, his journalism and his commitment to justice for everyone.

Power of the people unleashed

This was a historic day for the Malcolm X Library and the people of San Diego. Many came out to witness this rare occasion. A big, beautiful portrait of Mumia Abu-Jamal, made and donated to the SD-CABP by local artist Mario Torero, was at the center of the room for all to view.

A collection of Abu-Jamal’s books, and Leonard Peltier’s book “Prison Writings: My Life Is a Sundance,” were on display. Pam Africa and Carlos Africa brought some MOVE T-shirts and several copies of the informative pamphlet “25 Years on the Move.”

The majority of people in the seminar room were in their thirties or early forties. Many were not yet born when the MOVE 9 were incarcerated in August 1978. Many were still in grade school when the Philadelphia Police Department dropped a bomb on MOVE headquarters, destroying an entire predominantly African American neighborhood, in May 1985.

The program began with a warm welcome to our guests, followed by an update on Indigenous political prisoner Leonard Peltier’s fight for freedom from Zola Fish, organizer for the San Diego Leonard Peltier Defense Committee.

Before we handed the program over to the MOVE 9 members, we gave gifts to all the guests to commemorate their first visit to San Diego and also to show them how much we appreciate the sacrifices they have made to make a better world for all of us. Pam Africa was presented with a copy of the new Struggle-La Lucha book, “Black August 1619-2019,” which includes essays by Mumia.

Pam, Janet and Janine all agreed that Mumia Abu-Jamal will be free.

Why do they believe this so strongly? They said it is the power of the people that will free Mumia and all political prisoners. This system did all it could to kill Mumia while he was on death row. When he was removed from death row and given life in prison without parole, the system tried again to kill him, by denying him hepatitis-C treatment and other health care.

The people responded. They did not bow down. They never did, they never will. Mumia received treatment for himself and for many other prisoners as well. Now it is time to plan the next steps to free Mumia and all political prisoners.

The meeting ended with a book signing of “25 Years on the Move” with cameras flashing as people took pictures with these courageous women in front of Mumia’s portrait.

Next, the visitors were taken to the historic World Beat Cultural Center to meet longtime San Diego activist and WBCC founder Makeda Cheatom, and then on to the Red Sea Restaurant, where Janine and Janet experienced another first — the taste of delicious traditional Ethiopian food.

It was close to midnight when Pam, Janet, Janine and Carlos arrived back in Los Angeles to prepare for the next day’s forum at the Harriet Tubman Center for Social Justice.

On Sunday morning, Dec. 15, Janet and Janine experienced another first: visiting Venice Beach, where they toured the boardwalk, walked in the sand and gazed at the vastness of the Pacific Ocean and the mountains of the California coast.

Mario Torero’s portrait of Mumia Abu-Jamal was hung up at the Harriet Tubman Center for the afternoon forum, and delicious food was awaiting when the honored guests arrived. The center was filled to capacity as Jessica Moneà Evans performed a high-energy West African dance to begin the program.

The crowd swelled to the point that meeting chairperson Rebecka Jackson-Moeser had to ask for more chairs to be brought out in an attempt to seat everyone before handing the program over to the featured guests Pam, Janine, Janet and Carlos.

Nearly 100 people crowded into the event, publicized through social media and hundreds of posters taped up around the city near locations where progressives gather, near colleges and high schools, especially those with large Black and Brown attendance, and at major intersections.

Many of the participants said they learned about the event from a poster, including Manuel F., who was Carlos Africa’s cellmate and whom Carlos hadn’t seen since 1988: “I saw his picture on a poster at a lightpost and I had to come.”

RadioJustice L.A. recorded the entire meeting to be rebroadcast at a later date. The audience included many youth, activists and organizations representing Black liberation struggles in Los Angeles.

Afterward, some of the participants came to a meeting of the Harvard Boulevard Block Club — a neighborhood block association representing Harvard and Hobart Boulevards in South Central L.A. Folks enjoyed cornbread and chili before hearing the featured speakers, who had to catch their breath, just coming from the previous meeting. The packed meeting was held at the home of Maggie Vascassenno and John and Sekou Parker.

The neighbors had many questions and were inspired deeply by the reports of Janet, Janine, Pam and Carlos. Carlos also emphasized the links between the historic struggles of the Latinx community and organizations like the Young Lords with the struggles of the Black Panther Party.

Block club members especially appreciated that emphasis on Black and Brown unity since the block is mixed between the two ethnicities and continues to fight attempts by the police and politicians to divide the two. In the words of Block Club President Joe Crosby, the meeting was “history in the making.”

Ona Move — our sisters in the struggle!

John Parker contributed to this report.