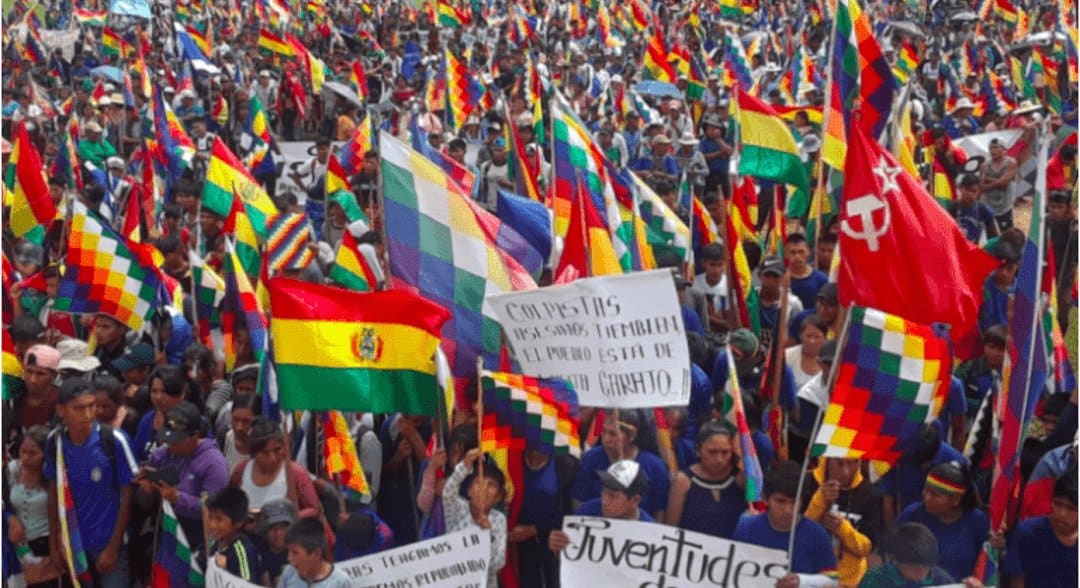 Cochabamba, Bolivia — Known as Bolivia’s Chapare region, the Tropico of Cochabamba is a sanctuary for elected President Evo Morales’ most dedicated base of support. Since the November 10 coup, it has effectively become a self-governing territory where the military junta is absent.

The police and military fled the area as the coup began and were told they would only be welcomed back if they “get on their knees and apologize” to the community.

Chapare is a 12,000 square kilometer swath of land where hundreds of unions have flourished. Spending time with those union members, who run society in a collective fashion, offers special insights into the resistance to the coup.

Despite the resilience on display here, there is also a sense of dread. Union leaders have told me that if the state decides to militarize the region, as it has signaled, then only a bloodbath could break the strength of the community.

Chapare has always had a high degree of self-governance, owing to the needs of the community. When the neoliberal Bolivian governments of the 1980s closed down a large number of state mines in Potosi and Oruro, many rural workers “relocalized” to this tropical region to grow coca and other crops.

The presence of former miners, who had been part of the revolutionary struggles of Bolivia’s miners’ union, brought a proletarian tradition that fused with the Indigenous politics of campesino communities.

The relocalization was far from a smooth process. The U.S. was stepping up its so-called war on drugs at the time, using it as a pretext to intervene militarily in Latin America. The DEA teamed up with the Bolivian military to declare war on the campesinos, and attempt to eradicate coca.

The commanders in that effort were DEA agents; Bolivian troops served as foot soldiers at their disposal.The DEA was given so much power it could determine who could enter and exit the area.

It was during the struggles against the presence of the U.S. that Evo Morales rose to the top of the union structures in Chapare. And in facing down the DEA and the Bolivian military, an extraordinary level of organization was developed.

Today, there are six union federations in the region, and within each federation there are about 30 “centrals.” Within each central there are about 10 unions, each of which has between 100,000 and 200,000 members. The total number of unions in Chapare numbers somewhere in the hundreds.

Due to the weak presence of the state, the unions organize most aspects of daily life in the area. They establish plans for infrastructure projects, manage land and social disputes in the community, set up local media outlets, and, of course, organize the campesinos’ political activities.

Since Evo Morales’ 2006 land reform effort, the land has been owned by those who work it, with each union member controlling their parcel of land with no landlord.

The unions won’t give up these victories easily.

Taking on the coup

Since the coup, that union-based resistance of Chapare has taken on the role of policing.

On Nov. 10, as it became clear that the coup had overwhelmed Evo’s elected government, the police preemptively fled the area, escaping to the nearby city of Cochabamba.

Coup officials knew that social organization was so solid in Chapare that they would never be able to contain the resistance. And they were right. After the coup took hold, almost every police station in the region came under attack from the local population.

Israel, a local journalist at Radio Kawsachun Coca, a union-run station, explained, “The people were so enraged, no one could stop them.”

Israel was echoed shortly after by Senobio Carlos, the mayor of Puerto Villaroel. “We never told the police and military to leave, they fled,” Carlos said. “In fact, there was one military base where soldiers hadn’t managed to leave before protesters had blocked off all exits. I personally went there and told them that I would guarantee their safety if they join the community and don’t turn their guns on us.”

Carlos said he was branded a traitor by his own community for attempting to negotiate with the soldiers, who were whimpering for mercy.

Since then, the community’s position has hardened. Union leaders now say that the police are entirely unnecessary, and can only return if they get on their knees and ask for forgiveness.

With the coup’s security forces expelled from the area, the unions established the “union police,” under the command of the community. I met them while they were standing guard at a union meeting, and found them unarmed other than a few sticks. They are drawn from and fully accountable to the community.

Everyone I spoke to in the Chapare appeared content without the state’s police in the area. One council member, Limbert, from the local town of Ivirgarzama, said, “We’re even safer now without the police. They used to charge truck drivers illegal tolls, they’d ambush people who were walking home at night and steal their phones. Now we don’t have that, anyone can walk around safely in the Tropic.”

Still, a couple of military bases that have remained intact. Inside, local teenagers are performing their military service. As the coup unfolded, a local journalist named Sabina told me how the parents of those young men flooded towards the military base and pleaded with their children not to side with the coup. Since then, troops have been “active,” but have agreed to only stay within their base. All other military units have fled.

Though the police haven’t been able to re-enter the region, the coup government has tried to punish the residents of Chapare for expelling them. They have cut off all services to the public bank, Banco Union, which across most of this region is the only national bank with ATMs.

What’s more, the coup’s interior minister Arturo Murillo, whose nickname is “El Bolas” (in reference to his macho posturing and violent attitude), has threatened all of Chapare with the denial of the right to vote in any upcoming elections – unless they allow the police to re-enter.

Murillo’s police have since announced that they are preparing to “enter, jointly with the armed forces, into the Tropic of Cochabamba, in order to establish the rule of law in this area.” They haven’t yet explained exactly how, because the only possible way is by military invasion and occupation.

“The police can’t come back, people won’t accept it,” said Segundina Orellana. When I asked her what could be done to combat a potential invasion, she said that the region would rise up, and hoped that it would push the rest of the country to do so as well.

It’s not hard to see why the community won’t countenance the return of the police. On the 15th of November, union members from this region were marching towards the city of Cochabamba, and were shot at by officers, some from helicopters. Nine were killed that day in the Sacaba massacre. 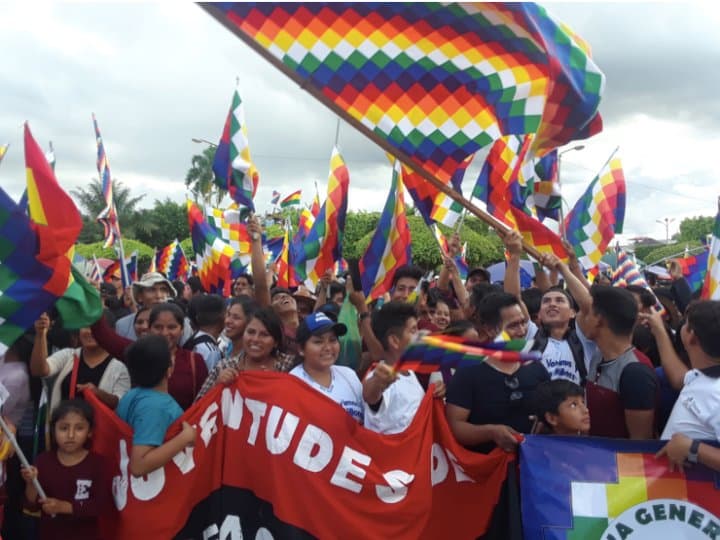 Chapare is one of the most demonized regions of the country. Mainstream Bolivian media routinely portrays its population as a collection of narco-terrorists, pumping out evidence-free claims that the FARC [Revolutionary Armed Forces of Colombia] is controlling protests.

The reality is entirely the opposite, as the production of coca has actually been reduced under Evo’s rule, while it has skyrocketed in U.S. allies like Peru and Colombia. The unions themselves play a role in ensuring that production is controlled and destined for traditional use. In fact, most so-called “cocaleros” also produce fruits, rice, cheese and other agricultural products.

Though their community benefited from the flood of public infrastructure projects and investments in public services under Evo, that’s all gone now. Yet they’re still here, as determined as ever in their commitment to the MAS [Movement Towards Socialism].

Nor is anyone here acting under obligation from union leaders, as is alleged by mainstream media and Western-backed pro-regime-change NGOs. In fact, the members are usually more radical than their leaders. I went to numerous union meetings with a federation leader named Julian Cruz, and watched as he was forced by his rank-and-file to explain why he wasn’t a traitor for negotiating a peace deal with the coup government.

The participatory nature of this movement is remarkable. Julian explained to me how he has to attend every single meeting of every union central within his federation, and that if he doesn’t, union members members will take him out to the jungle and “tie me to a tree for 24 hours” as a punishment for lack of transparency. Not many unions in the U.S. or North America can count on that level of grassroots engagement.

Watching the media’s campaign against the campesinos from Chapare, it feels like the demonization is a prelude to bloodshed. Coverage of the Sacaba massacre was instructive, as the national media falsely framed the killing as “crossfire.” Coup supporters point to the one-sided coverage as proof that there was no massacre, but rather an armed clash with narco-terrorist cocaleros.

Nevermind the lack of evidence that the protesters were armed, and that not a single police officer died.

“The media say we’re armed terrorists, but in reality we haven’t got anything to defend ourselves with if the military does attack,” a young campesino named Eleuterio Zurita, who has offered protection for journalists, told me. “The point of an attack would be to break the union organization we’ve got here, so I hope the world can support us and show the truth.”

The self-governing nature of Chapare has arisen out of the practical need for sustenance and self-defense, not a devotion to anarchistic ideology. All the unions here are currently holding emergency meetings, not to discuss the administration of local affairs, but to lay out a strategy about how to confront the coup nationally, and thereby take back state power.

At every meeting I have attended, union members have passed a resolution committing to contributing grassroots donations for the MAS campaign, not to be used here, but instead by MAS chapters in other parts of the country where the party isn’t as strong. This is how MAS has thrived from its earliest phases, so it would be difficult to imagine the party putting forward a ticket without a representative of this organizing tradition.

The coming days and weeks will determine whether this radical space of resistance will be drowned in blood by the Bolivian junta. If it survives, it will be the base from which the left resurrects its national project.

Ollie Vargas is a Bolivian journalist and writer. He has contributed to teleSUR, Morning Star, and other media outlets.