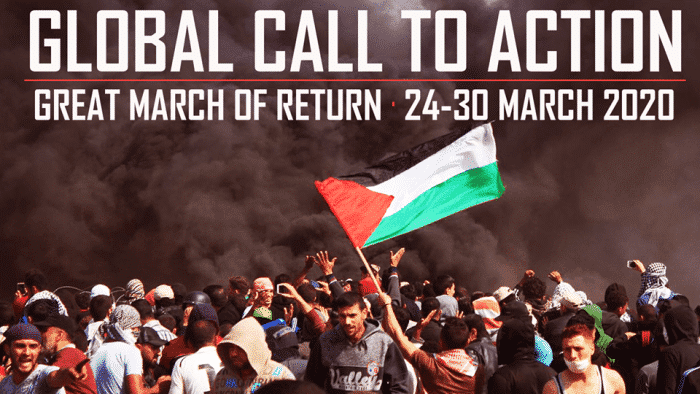 Join Palestinians in the besieged Gaza Strip in a global mobilization on the second anniversary of the Great Return March to demand the right of return for Palestinian refugees and an end to Israel’s siege of Gaza.

On March 30, 2018, tens of thousands of Palestinians in the besieged Gaza Strip launched the Great March of Return and Breaking the Siege.

But the demands of the Great Return March – an end to Israel’s brutal closure of the Gaza Strip and the right of return for millions of Palestinian refugees ethnically cleansed from their homes – remain no less critical nearly two years later.

Seven years after the United Nations first warned that the conditions imposed by Israel’s siege would render Gaza unlivable by 2020, its crises of electricity, water, employment, and food security have already reached the breaking point.

This isolation of the Gaza Strip is part of Israel’s strategy to displace the Palestinian people, fragment our society, and liquidate our national movement.

Its plan, which started with the ethnic cleansing of 720,000 Palestinians in 1948, continues today with the use of walls, checkpoints, and roads to divide Palestinian neighborhoods and communities; the demolitions of Palestinian homes and institutions in Jerusalem, the West Bank, and 1948-occupied Palestine; the seizure of Palestinian land for Israeli settlements; the targeting of Palestinian leaders for political detention; and the exclusion of Palestinian refugees from their occupied homeland with lethal force.

Yet Palestinians have never paused our legitimate struggles for return, self-determination, and national liberation, from the armed Resistance, to general strikes, to Boycott, Divestment, and Sanctions (BDS) campaigns, to the Great Return March.

As the second anniversary of the Great Return March on 30 March – Palestinian Land Day – nears, we call on its supporters worldwide to join an international week of action to support its demands between 24-30 March 2020.

In all your efforts, we ask that you visibly support the Great March of Return and Breaking the Siege and our just demands.

Please send announcements of your events, as well as pictures, videos, and reports from them, to samidoun@samidoun.net, or message them to Samidoun Palestinian Prisoner Solidarity Network on Facebook.

On this, the International Day of Solidarity with the Palestinian People, we call on the world, its people and movements to escalate their support for Palestine and our century-long struggle for national liberation.