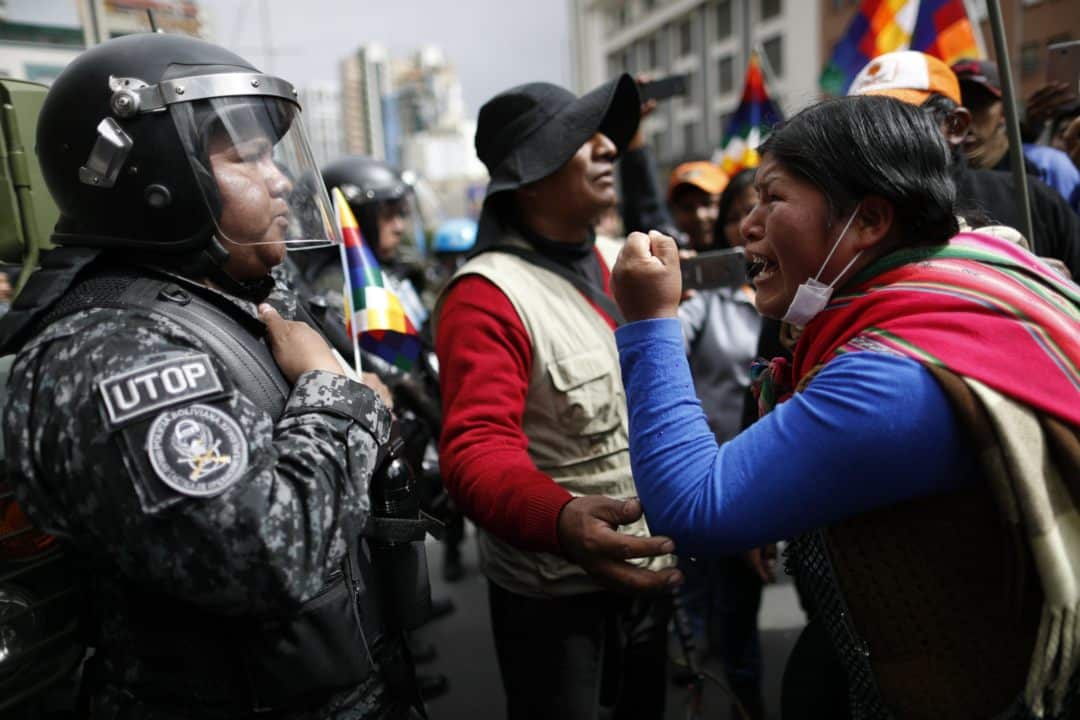 On Nov. 19, the tenth day of the coup against legitimate, democratically elected Bolivian President Evo Morales, police and soldiers fired from helicopters into a crowd of protesters — Indigenous people, workers and peasants — blockading a fuel depot in El Alto, the South American country’s largest city and a center of resistance near the capital, La Paz.

The protesters were demanding the resignation of self-proclaimed interim President Jeanine Añez. Reports say at least one person and possibly as many as six were killed and 23 wounded.

Four days earlier, in the Indigenous stronghold of Huayllani, Cochabamba, nine people were shot dead during protests against the U.S.-backed coup regime. A relative of Armando Carballo, a peasant farmer who was among the victims, said: “My brother-in-law died with three gunshot impacts. Leaves a 2-year-old girl in the orphanage. We ask for justice for our brother.”

In all, at least 24 people have been killed, more than 700 wounded and over a thousand arrested since the military ousted Bolivia’s first Indigenous president on Nov. 10, after the U.S.-dominated Organization of American States supported opposition claims of election fraud — without proof.

Morales and Vice President Álvaro García Linera, both representing the Movement Towards Socialism (MAS), were forced to leave the country, accepting asylum in Mexico under threat of assassination by police groups.

“We will be back and join the fight to strengthen our social forces,” Morales told Al-Jazeera.

The coup plotters, fronted by Añez, proclaimed the military free to fire on unarmed protesters with no consequences. Independent journalists are being driven from the country. So were Cuban health workers, after four of them were arrested on bogus charges of funding the anti-coup protests. Diplomats of Bolivarian Venezuela were expelled. Añez and another pretender “president,” Juan Guaidó of Venezuela, have expressed their mutual admiration.

Undefeated and fighting back

Looking at these facts in isolation, the situation seems grim.

But the Bolivian people are not giving up. They have not been defeated. They are fighting back.

Despite the danger, protests are growing. Braving teargas and live ammunition, huge marches from the countryside are converging on urban centers, especially La Paz. While the repressive forces were attacking in El Alto on Nov. 19, thousands of rural teachers marched into the capital at the head of a major labor demonstration.

Many protesters carry the colorful Wiphala flag — representing the Indigneous people of Bolivia and surrounding countries — which was torched by the racist-fascist forces that earlier mobilized against President Morales.

This mass courage and determination helps to strengthen the resolve of the political representatives of the movement in La Paz. The Congress, where members of the MAS form a majority, have refused to accept Morales’ forced resignation or to recognize the legitimacy of the coup regime.

Significantly, there are reports that rank-and-file soldiers, many of them Indigenous people themselves, are starting to break away and join the protesters, refusing to repress the people.

A report sent by email to Morales supporters on Nov. 20 states: “The coup regime inside Bolivia is falling apart at the seams. According to sources inside the military, there has been friction, both between the military and the police, and between their respective leaders and foot soldiers.”

The report continues: “Bolivian media have reported that Bruce Williamson at the U.S. Embassy in La Paz has operated as a bag man, doling out millions of dollars to generals and police chiefs. Local media have reported that the general who told Morales to resign has already left for the USA with his money. The Bolivian news report states that it expects more generals to follow suit as they are fearful of being put on trial for their repressive acts, not to mention their corruption.”

The mask of “democracy” and “human rights” fashioned by their masters in Washington fits poorly on the crude white supremacists, anti-Indigenous racists and fascists at the center of the coup, and the military and police officials trained by the Pentagon’s infamous “School of the Americas” and the FBI. Añez herself is known for her racist, anti-Indigenous views.

Most important, the struggle of the Bolivian people is not isolated. A furious class struggle rages across the South American continent and the Caribbean, where the people of Haiti continue to resist under harsh repression.

Everywhere, the forces of the people — workers and peasants, Indigenous and Afro-descendants, women and LGBTQ2S people — are measuring their strength against the capitalist oligarchs and their repressive forces (military, police, death squads), behind whom stands U.S. imperialism.

In Brazil, the people’s relentless struggle and the resulting internal conflicts within the ruling class won the release of former President Lula da Silva of the Workers Party just days before the coup in Bolivia.

In Chile, the people continue to rise after more than a month of mass protests, despite horrific violence like police targeting the eyes of demonstrators, blinding more than 200 so far. They have forced the Sebastián Piñera government to agree to rewrite the Pinochet-era constitution.

But the half-measures proposed by the U.S. stooges in Santiago have not demobilized the people, who demand a Constituent Assembly and genuine change in the relationship between rich and poor, a process that was brutally postponed more than four decades ago by the coup that overthrew Salvador Allende’s socialist government on 9/11/1973.

Chilean protesters have proclaimed, “Neoliberalism was born in Chile, and it will die here.”

On Nov. 21, workers and students in Colombia will stage a general strike against the death-squad regime of President Iván Duque. Repression against Indigenous communities and left forces by the traitorous Lenin Moreno government in Ecuador is setting the stage for a new uprising like the one that won concessions against an International Monetary Fund austerity plan earlier this fall.

Following the election of a new, left-leaning president in October, workers in Argentina have held massive protests in Buenos Aires and other cities against the coup in Bolivia and in solidarity with the Indigenous resistance there. Resistance is building in Peru and Uruguay, too.

Bolivarian Venezuela and socialist Cuba — fortresses of popular power besieged by U.S. imperialism and its oligarchic allies with blockades, sanctions, military threats and slanders — continue to resist and offer every assistance they can to the people in struggle.

In Bolivia and elsewhere, the masses are learning valuable lessons every day: by developing new, effective tactics of resistance; that the state cannot be merely taken over but must be smashed and replaced with the power of the workers and oppressed; how the capitalist media turn reality on its head, portraying right-wing violence as heroic while ignoring or disparaging genuine popular protest.

Let’s take inspiration from the resisting people of Bolivia to strain with every fibre of our being toward destroying the evil system of capitalism and imperialism in the U.S. and around the world. In the words of the socialist anthem, The Internationale, “a better world’s in birth.”