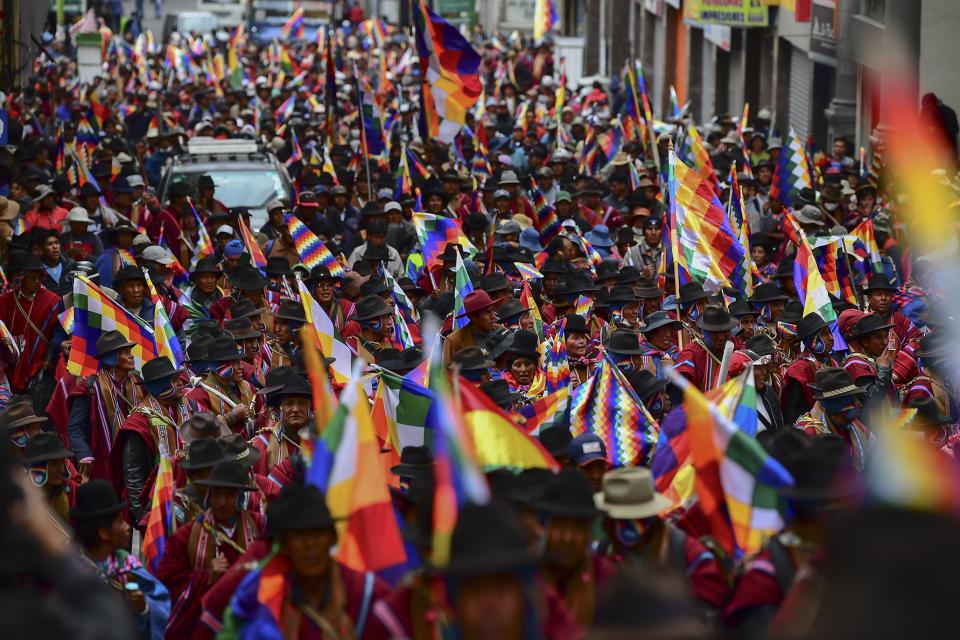 On this occasion they were peasants with red ponchos, men and women with hats, coming from afar, from the highlands. Then they joined those from the city of Alto, those who could get there, others were held back as they tried to reach the center. La Paz has become the scene of daily mass mobilizations, town councils, repressions, a raging river against a coup d’état.

This time the day ended without tear gas or motorcycles. The police and military maintained their usual encirclement of Plaza Murillo, center of national political power, where the seat of government, the legislative branch and the vice-presidency are located, among other institutions.

Thursday’s central events took place in those blocks. The Senate elected a new president: Eva Copa, a native of the city of El Alto, as well as the president of the Chamber of Deputies elected the night before, Sergio Choque. With the swearing in of both new presidencies, belonging to the party of the Movement Toward Socialism (MAS), which holds two-thirds of the seats, the direction of the legislative power was redefined.

Simultaneously, the self-proclaimed president Jeanine Añez appointed five more ministers to her cabinet. Two of them, appointed yesterday, had statements alerting them to the policies to be pursued by the government appointed outside the Constitution in an attempt to build an institutional image.

The first was the Minister of the Transitional Government, Arturo Murillo, who announced that he will undertake a “hunt” against three former officials of the overthrown government: Raúl García Linera, Juan Ramón Quintana, Hugo Moldiz, all wanted for “sedition”.

The second was Communication Minister Roxana Lizarraga, who threatened “journalists or pseudo-journalists”, both national and international, who engage in “sedition”.

The few announcements made by the transitory government, where high commanders of the Bolivian Armed Forces and the Bolivian National Police were also elected, have been a double threat within a general framework of news of repression, deaths, injuries, confrontations, military deployed in the streets and highways.

The coup strategy faces an inevitable contradiction. The coup d’état denies being a coup d’état, seeking to build an institutionality outside the law to sustain this narrative, but in the acts of self-proclamation and announcements of hunting of leaders and journalists it reveals its anti-democratic character.

That has been made clear to those who mobilize day after day and have among their main demands the resignation of Añez, whom they accuse of being a coup plotter and a racist. For these reasons, together with the demand for Evo’s return – which is not homogeneous in the mobilizations – they have set in motion an uprising in different parts of the country in a process of confluence towards La Paz.

It is expected that between Friday and Saturday those who mobilize from rural areas of the interior of the country will arrive, including the coca growers of the Tropic, who this Thursday protested in the city of Cochabamba.

Therefore, the situation is uncertain for the coup d’état. On the one hand, it is facing a growing national mobilization process increasingly marked by racial cleavages: those who mobilize recognize the self-proclaimed Añez, Fernando Camacho and Carlos Mesa, leaders opposed to Indigenous nations, due to their ancient and recent history and the trampling of the Whipala flag.

On the other hand, those who lead the coup must fulfil the announced pledge: the holding of presidential elections within ninety days. There are four central steps in the process: the overthrow, the formation of a new transitional government, the call for elections, and the holding of elections.

The process is currently at the moment of the establishment of the government, and is facing difficulties: it must appoint new authorities of the Supreme Electoral Tribunal, something that must proceed through the legislative branch, where the MAS has presidencies and majorities. Will it seek an agreement with those who are persecuted or will it advance against the legislative branch, further evidencing its coup character? Will the MAS accept an agreement with the objective of achieving an electoral channel?

The mobilizations are expected to increase in the next few days with the arrival of people from different departments of the country and the massive presence of El Alto, where the dead are guarded this Thursday night. There is speculation of more than ten dead in the country, and more than two hundred arrested, a provisional and approximate figure within which the rule of law has been broken and journalists who do not comply with the coup order are being persecuted.