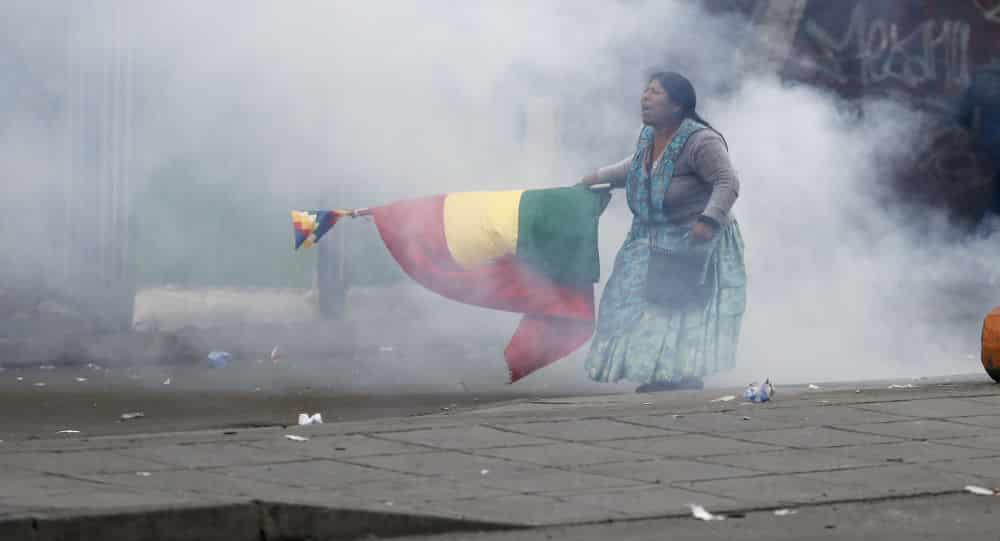 “Welcome to the dictatorship,” said one woman as she ran from tear gas, motorcycles, pickup trucks with arrested youth, and military tanks. The scene was in the center of the city of La Paz, in the afternoon, after the president of the Senate, Adriana Salvatierra, had been detained and the self-proclaimed president Jeanine Añez had appointed a new military leadership.

Events are happening at dizzying speed in Bolivia. The bloc carrying out the coup d’état has taken a series of steps to carry them forward. Añez’s self-proclamation, gospel in hand and with the tricolor band placed by the Bolivian Armed Force was one of them. On Wednesday, the next one took place, that of fictifying the government, that means putting oneself in a position to give orders. These steps are paradoxical: while they are trying to prove that there is a new government adhering to the laws, the unconstitutional way in which they do so testifies to the dimension of state slaughter. Not only for analysts, parties and diplomats, but for a segment of the population that regards self-proclamation as impossible to justify democratically.

That was reflected in the uprising in the city of El Alto that began on Monday, which this Wednesday began as a massive assembly and then descended in a unified manner to La Paz. The number of people mobilized is growing, and their radicalism is consolidating. The situation in this key territory of Bolivian history and political dynamics reflects the tensions and unity. On the one hand, the mobilizations are characterized by two indisputable points of unity: the defense of the Whipala that was trampled by the coup plotters – “it is the revolution of the Whipalas,” said an Aymara leader – as well as the fact that Añez, who made declarations against the indigenous peoples, must leave an illegal presidency.

On the other hand, there is a debate: the return of Evo Morales. One group is chanting it, asking for it and struggling to make it a reality, while another affirms that they do not belong to the Movement Towards Socialism (MAS) – “we are not masists,” they say-, but they are clear that they must confront the coup d’état that does not distinguish between masists or no masists, and equally persecutes, represses and murders. This situation seems to be in an upward spiral where police violence reinforces the uprising. There have already been two deaths in El Alto -possibly three- and the prolonged crackdown lasting hours this Wednesday exacerbates the already clear separation: El Alto, the Whipala, the indigenous nations, against the coup d’état led by those who despise and humiliate them.

The direction of the coup attempts to build messages in response to this, such as placing Whipalas on top of military tanks, or broadcasting videos of Fernando Camacho – the main civilian and business face of the coup – and Añez where they claim to be united and respect diversity and lawhipala. The messages do not produce the expected effect and the conformation of a process of resistance-advance. It is not only in El Alto, but also in rural areas, with local mobilizations, in highways, cities, and other areas that converge toward the city of La Paz, where the Ponchos Rojos arrived on Wednesday. Will there be a siege of La Paz? It is one of the main fears that we face at this time. Fear is precisely what drives many who support the coup, celebrate it, and organize themselves in their middle class and wealthy neighborhoods to defend themselves from what they see as the invasion of El Alto by the Indigenous people. Fear and revenge are two of the forces that are driving the coup. The overthrow of Morales had several objectives, among which was to return to the configuration of the country lost to the ruling classes: a Bolivia governed by them and for them.

They are advancing in that objective, and on Wednesday night eleven ministers of the new cabinet were appointed after the crackdowns and the news of the dead. According to several newspapers, there were two: one in Montero and another in Yapacaní, in the department of Santa Cruz. News of repression, persecution, arrests, gunfire against demonstrators are multiplying in social networks, but speed, censorship, the rupture of the rule of law and the lack of government open a field of impunity that appears to have no limits. Who commanded the Bolivian Armed Forces until tonight? Who commands the right-wing armed groups that have lists of masists to be assassinated? The process of consolidation of the coup is advancing in its steps and has international backing.

In addition to the U.S. government and the secretary of the Organization of American States, Luis Almagro, the Colombian government also joined, and the high representative of the European Union’s foreign policy, Federica Mogherini, supported Añez’s appointment as interim president. The next step of the coup will be to advance the legislative power, where the MAS has the majority in both chambers. While that takes place, the resistance process will grow, spurred by demands, indignations and forces, uncertain about its direction and strategy for confronting the coup.