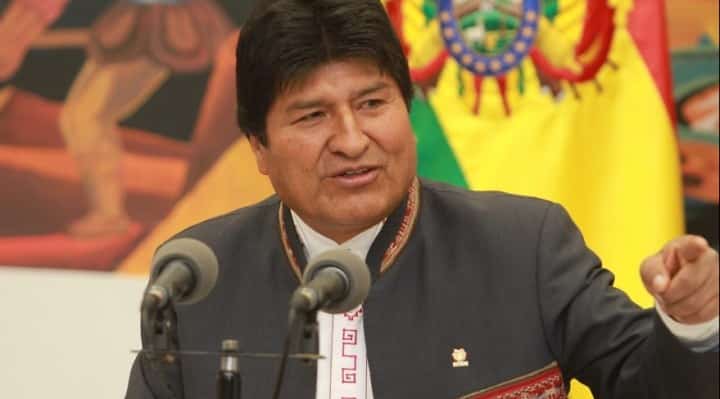 Hosted by Party for Socialism and Liberation – Philly

Join us in a rally to demand the US government end its war on the people of Latin America and the Caribbean — at City Hall (15th and Market St side) in downtown Philadelphia.

A US-backed coup has just been carried out in Bolivia against the socialist leader Evo Morales, the first president in the country’s history to come from the Indigenous majority. This is a historic moment and people in the United States can do our part by demanding an end to US intervention.

The goal of the coup in Bolivia is to restore the absolute authority of the Bolivian elites who rule as clients of the United States. They despise the country’s Indigenous majority and want to eviscerate the rights of the working class.

The coup also has a clear regional significance. Progressive and revolutionary forces have been on the march over the past year. President López Obrador’s new government in Mexico committed itself to non-interference in the sovereign affairs of the nations of Latin America. Venezuela defeated the U.S.-backed coup attempt of Juan Guaidó. An uprising in Ecuador forced the government to flee the capital city and cancel an IMF-imposed austerity package. An ongoing rebellion in Chile has brought historic crowds into the streets and put the right wing government of Sebastian Piñera on the defensive despite vicious repression by the police and military. The right wing government in Argentina was voted out of office in favor of the progressive Alberto Fernández-Cristina presidential ticket. And immediately preceding the Bolivian coup, wrongfully imprisoned ex-President Lula was freed.

The Bolivian ruling class and their military are following the dictates of the U.S. government, which has worked overtime to turn back the leftwing tide sweeping Latin America.

Join us to say No Coup in Bolivia! US Out of Latin America!