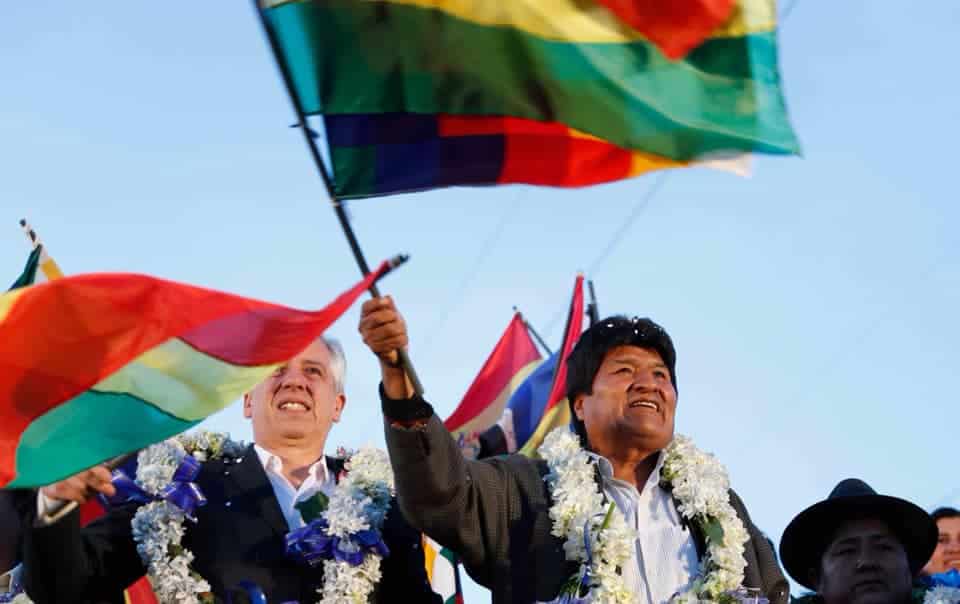 DEFEND THE LIFE OF EVO MORALES!
STOP THE U.S.-FASCIST COUP IN BOLIVIA
CALL FOR WEEK OF EMERGENCY ACTIONS NOV. 11-17

On Nov. 10 President Evo Morales of Bolivia was forced to resign during a military coup supported by the U.S. government. Fascist terror has swept over the country in recent weeks since President Morales won re-election, including the racist, sexist attack on Mayor Patricia Arce of Vinto, who was terrorized and dragged through the streets.

Struggle-La Lucha newspaper and the Partido por el Socialismo Unido/Socialist Unity Party call on the workers and the progressive movement to take immediate emergency actions to defend the life of Evo Morales, the Indigenous community and the progressive social movements of Bolivia. We hold President Donald Trump and the U.S. Congress responsible for their safety. We join the call of Cuban Foreign Minister Bruno Rodriguez: “We call for a worldwide mobilization for the life and freedom of Evo.”

We remember how the attempted 2002 coup against Venezuelan President Hugo Chavez was derailed by the intervention of the masses and international solidarity. We must do everything in our power to prevent a repeat of the fascist terror that swept Chile after the Sept. 11, 1973, Pinochet coup organized by Washington.

Evo Morales is the first Indigenous president, representing the Bolivian majority, in the country’s 200-year history. Morales has been a global leader in the struggle to defend the planet from capitalist-driven climate change. The same capitalist interests trying to destroy the Amazon forest are behind the coup in Bolivia.

Since Morales took office representing the Movement Towards Socialism, extreme poverty dropped from 38 percent in 2006 to 17 percent in 2018; the national minimum wage increased by roughly 104 percent; and over $1 billion was allocated for construction of over 5,000 medical clinics, schools and gymnasiums in poor areas.

The struggle in Bolivia is far from over. Today the class struggle is raging across the South American continent between forces representing U.S. imperialism, colonialism, racism and austerity, and the people’s movements that refuse to be ground down under the boot heel of the rich and powerful.

Workers, anti-war and anti-imperialist activists in the U.S. have a special responsibility to show solidarity with the oppressed fighting around the world against the domination of Wall Street and Washington. It is our responsibility to do all we can to push back the U.S. political, economic and military attacks on Bolivia and all of Latin America.

Hold emergency actions in your area during the week of Nov. 11 – 17. Post information on your local action on the Facebook event page: https://www.facebook.com/events/429263954310554/. Download protest signs and other material from this page.

Inform your co-workers, friends and family members, and help them get involved!