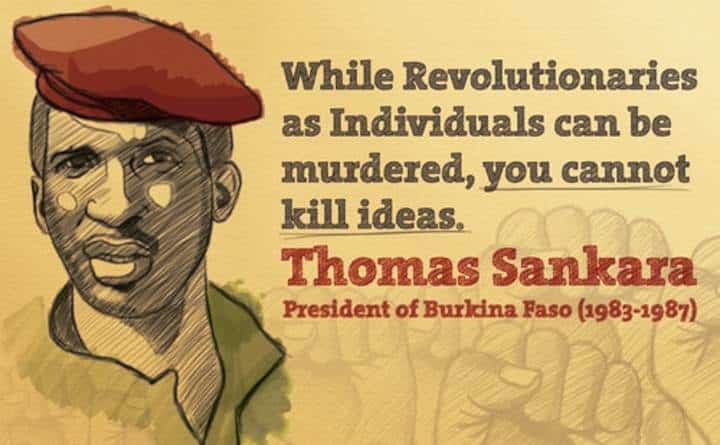 A documentary film about Thomas Sankara, former president of Burkina Faso. We are showing this inspiring film to commemorate the assassination of Thomas Sankara, who was known as “the African Che.”

It is interesting to note that at a time when youth have focused the world’s attention on the dire issue of climate crisis, and workers and Indigenous people in Ecuador are rising up against the International Monetary Fund’s austerity demands — that Sankara spearheaded major programs in both areas.

He promoted and led a massive people’s campaign called the “One village, one grove” program to combat desertification of the Sahel (the area between the Sahara Desert and Sudanian Savanna). Over 10 million trees were planted. That legacy lives on.

Under Sankara’s leadership, Burkina Faso nationalized land and mineral wealth and refused aid from the International Monetary Fund and World Bank, which incurred the wrath of both U.S. and French imperialism.

This began in 1983, when a group of revolutionaries under the leadership of 33-year-old Thomas Sankara led a popular revolt that took power.

One of the first acts of Sankara and the new revolution was to rename the colonial Upper Volta to Burkina Faso, which means “The Land of the Upright People” in Mossi. It was an act in defiance of French imperialism, which had coined the name “Upper Volta.” Burkina Faso was meant to instill people’s pride.

In just four years, amazing progress was made. Education and health care were made a priority. A national literacy campaign was developed and 2.5 million children were vaccinated against yellow fever, meningitis and measles. Women were appointed to government positions and their status was elevated so that they could go to school and work outside the home. Forced marriages, polygamy and female genital mutilation were all outlawed.

The assassination of Thomas Sankara and the overturn of this amazing revolution is reminiscent of the Paris Commune. While brief, the revolution’s legacy deserves to be studied and remembered by generations to come. The spirit of revolution continues today in the fight of the workers and Indigenous people in Ecuador and those in the streets everywhere fighting capitalist crisis and imperialist domination and war.