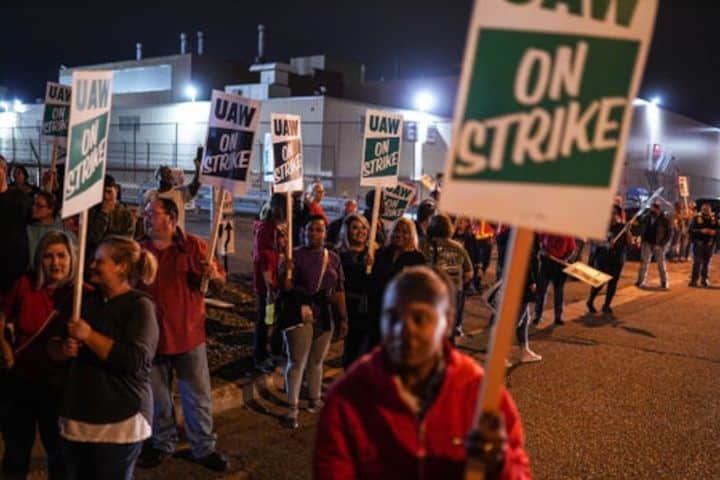 Sept. 18 — Almost 50,000 members of the United Auto Workers union walked out against General Motors on Sept. 16, shutting down 55 factories and parts plants across the U.S. It’s the largest strike in the country since a two-day walkout against GM by the UAW in 2007.

GM was bailed out by the federal government with $11 billion in taxpayers’ (that is, workers’) money in 2009. Since then, the company’s profits have rocketed — GM made $8.1 billion in 2018 — but union workers, who were forced to make concessions in previous contracts, have not seen any benefit as a result.

Instead, the company’s unionized workforce has fallen from 73,000 at the time of the 2007 strike to less than 50,000 today. Meanwhile, the auto giant relies increasingly on “second tier” temporary workers, who earn less and have fewer benefits than full time union members. Some of these “temp” workers have been employed up to six years in the same position.

The strike, now in its third day, comes amidst a growing tide of worker fightback. Led by teachers and hotel workers, the number of strikes of more than 1,000 workers rose in 2018 to the highest level since the 1980s. Messages of solidarity and unity have poured in from unions representing GM and other auto workers around the world, from Brazil to Germany to Mexico.

Despite the decline in UAW membership, auto remains a strategic area of the U.S. capitalist economy, and this huge strike by tens of thousands of organized workers has the potential to take back some of the billions in corporate profits and inspire other workers — both organized and unorganized — to take action.

Contract talks are continuing in Detroit, where both the union and GM are headquartered. At issue are wages, profit sharing, pensions and “worker flexibility” — the company’s demand that workers allow themselves to be subject to dramatic shift changes and schedules, and even abruptly moved to different cities.

But the standout issues are ending the influx of temps by turning those positions into jobs with full wages, benefits and job security, and ending the company’s assault on union members’ health coverage.

The same issues affect workers at Ford and Fiat Chrysler. GM’s contract usually sets the standard for the other automakers.

“I work right across from a temporary employee who’s been there for two and a half years,” said striker Chaz Akers on the picket line outside the GM engine plant in Flint, Mich. “I install the passenger side headlight. He installs the driver side headlight. I make more money than he does. I have better health insurance than he does.

“GM works the crap out of temp workers and then throws them away,” said striker Harrison Bowyer. “I’m fighting for jobs for future generations.”

In Toledo, Ohio, striker Paul Kane described how the workers gave up pay raises and made other concessions too when GM went bankrupt a decade ago. “Now it’s their turn to pay us back. That was the promise they gave.”

While the company is losing between $50 million and $100 million a day during the strike, its bosses have deeper pockets than the union. The company is reported to have a 77-day reserve of vehicles and parts. Strikers will receive just $250 a week in strike benefits beginning after two weeks on the picket line.

Even worse, GM announced Sept. 17 that it had cut off health insurance for the strikers effective immediately, forcing the union to pick up the tab for continued coverage. It had been previously agreed that the company would continue health coverage through the end of September in the event of a strike.

Decades of high-tech capitalist restructuring and the anti-labor offensive that began with Ronald Reagan’s busting of the air controllers’ strike in the 1980s have made auto workers’ jobs and livelihoods increasingly vulnerable. The increasing use of lower-paid temp workers with no job security is an issue that affects workers across the board.

“Ultimately, we’re just trying to get back what we’ve lost during the last couple of concessionary contracts,” said Celso Duque, a young worker at the Detroit-Hamtramck plant. “We’re trying to secure our future for the younger generations, trying to make sure our retirees still have benefits and that I’m able to retire once I get to that age.”

The writer is a member of the National Association of Legal Service Workers, Local 2320 of the UAW.