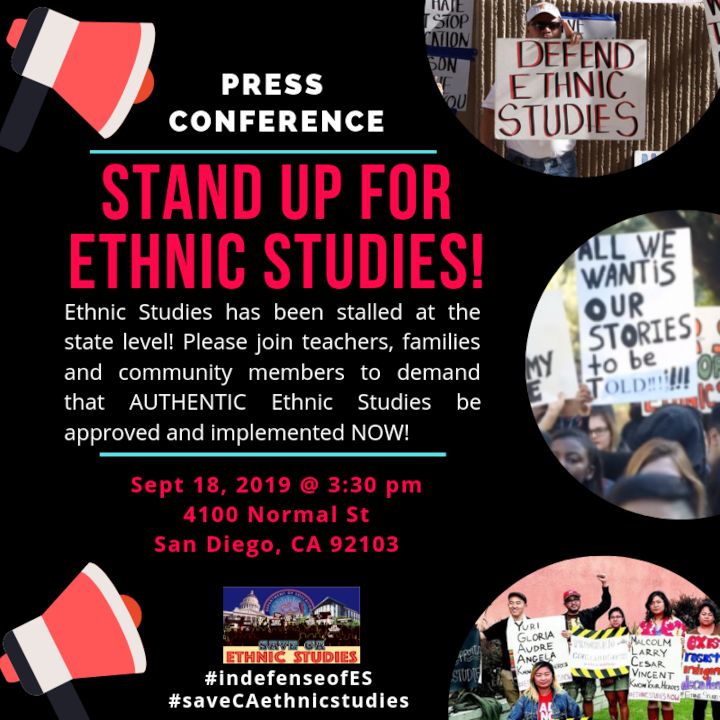 ALL OUT THIS WEDNESDAY TO SAVE ETHNIC STUDIES!
THE FINAL PUSH IS HERE!

Educational Justice and Equity are needed now, more than ever, and Ethnic Studies can help us achieve it!

For several decades, students and faculty have advocated for the inclusion of Ethnic Studies as a legitimate academic discipline; even holding rallies, sit-ins, and hunger strikes. But this year, Ethnic Studies educators, scholars, students and activists were hopeful. The development of a discipline-based Ethnic Studies Curriculum Framework developed by educator experts in the field became a reality. The stories of Asian Americans and Pacific Islanders, Latinx/Chicanx, American Indians/Native Americans and African Americans would be written, approved, and hopefully implemented throughout the state of California. So we thought.

Unfortunately, however, we have hit resistance at the state level and pushback from people wanting to stop the implementation and begin the whole process again!

That is why we are demanding that the California Board of Education and the Department of Education hear the plea from communities of color to keep and revise the existing draft of the intersectional Ethnic Studies model curriculum as developed by and for the community. The time is now. More students, educators, and organizations are joining in support of the broad Save California Ethnic Studies coalition/movement by the day.

While Ethnic Studies advocates agree that some revisions are needed, as is a part of the process by design, they are also troubled by the possibility that the curriculum will move the focus away from communities of color. This has been the core of Ethnic Studies since its inception fifty years ago, and is still direly needed in our heavily biased K-12 educational system. Ethnic Studies works, at narrowing and even eradicating the achievement gap for students of color when it is practiced authentically at the high school level, and further, has been shown to benefit white students as well. Curricular dilution is not the solution; authentic Ethnic Studies is needed, and yes, there is room for more inclusion, however not at the expense of what Ethnic Studies is.

PLEASE JOIN US IN OUR FIGHT TO HAVE OUR VOICES HEARD AND IMPLEMENTED! SAVE CALIFORNIA ETHNIC STUDIES NOW!