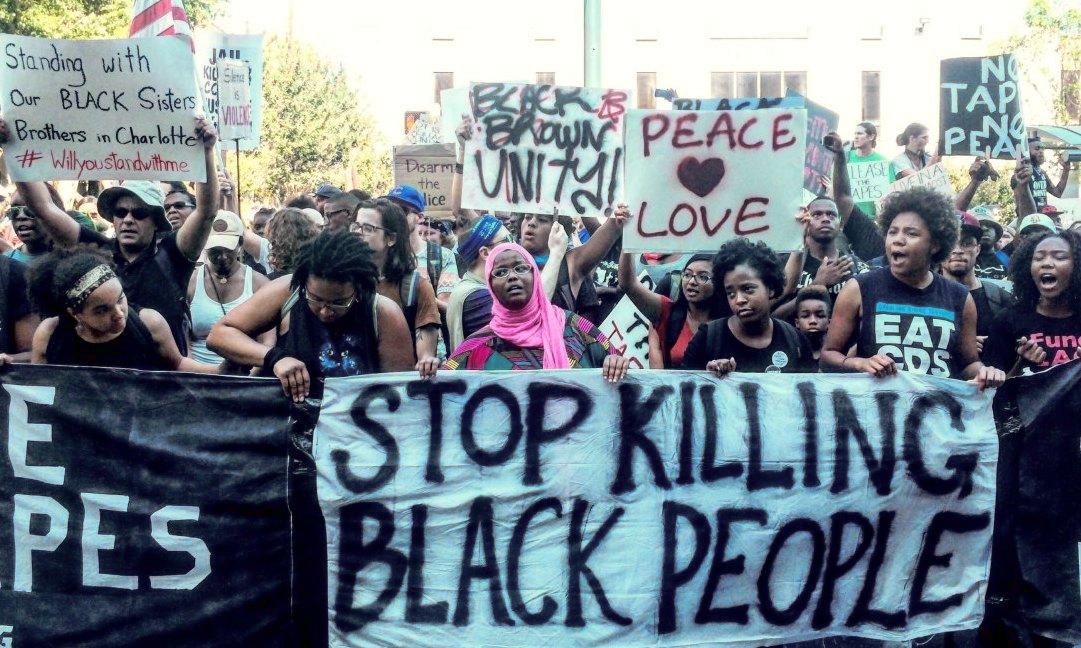 Aug. 4 — Let there be no mistake about it. Donald Trump has the blood of all the killed and wounded in the mass shootings of the past week on his hands, from Gilroy, Calif., to El Paso, Texas, to Dayton, Ohio.

And let there be no mistake about it that Trump speaks the mind of the ruling class. On Aug. 10, less than a week after the racist mass shootings, millionaires and billionaires traveled to the Hamptons on New York’s Long Island to give him $12 million in one night at a gala celebration.

His racism, his misogyny, his bigotry, openly spouted from his gutter mouth, are part of a deliberate strategy to mobilize the like-minded racists, bigots and male chauvinists to come out and vote for him in 2020.

There is mounting mass anger and outrage at the killings which followed his attacks on Rep. Elijah Cummings and the city of Baltimore, as well as his racist rants against four women-of-color representatives, and his relentless references to a so-called “invasion” of immigrants seeking asylum from Washington’s right-wing regimes in Central America.

Trump’s racist language was clearly mimicked in the language of the El Paso killer, who issued a document declaring that “this attack is a response to the Hispanic invasion of Texas.” Research shows that the Trump campaign issued over 2,200 Facebook ads with the same formulation, “invasion of immigrants.”

Trump was forced to go to the teleprompter and issue a wooden, hypocritical, brief statement criticizing white supremacy and hatred. This is like a thief crying “stop thief.” But Trump is still a white supremacist to his core. No anti-racist teleprompter declarations will change him one iota from the hardened racist that he is.

Racism has a long and bloody history in the U.S. Some say that U.S. fascism flies on the wings of racism. Since the first Spanish settlers arrived in the Southeast in the 16th century and then the English and Dutch in New England in the beginning of the 17th century, racism directed against the Indigenous population has justified the seizure of millions of acres of land and the murder and removal of millions of Native peoples.

At the same time, millions of people were kidnapped from Africa and imported to be enslaved on the plantation lands of the U.S., as well as in the Caribbean Islands and Central and South America. Anti-Black racism was the justification. Then, one-half of Mexico was seized and colonized in the Southwest. Anti-Latinx racism was added to the racist galaxy of the corporate masters. Tens of thousands of Chinese were brought to the West Coast to build the railroads. Anti-Asian violence became commonplace.

European immigration expands the ranks of the working class

Meanwhile, the corporations brought tens of millions of European immigrants to the U.S. to farm the land seized from the Native peoples and to do the mining, lay the railroad tracks, work in the factories, and expand the farm population and the working class.

The first European settlers established colonies on Native lands on the Eastern seaboard in the 17th century. With the expansion of the commercial and industrial revolutions of the 18th and 19th centuries, the bosses and landlords brought in more and more Europeans from Scotland, Ireland, Germany, Sweden, Norway and Holland. In the late 19th and early 20th century the bosses brought in millions from southern and eastern Europe, including many Jews fleeing persecution. By the beginning of the 20th century, millions of Italians, Poles, Hungarians and Czechs were also incorporated into the working class.

Before long, the U.S. was populated with millions of oppressed African, Native, Latinx and Asian people alongside millions of poor workers and farmers from Europe. All were toiling on the lands, in the mines and the factories of the U.S. millionaire ruling class.

In a society based on the exploitation of labor of the vast majority by a tiny minority, every capitalist—large or small, corporate or political—constantly feels the need to divide and rule. It comes with the territory. The pressure to weaken the subject population through divisions is always present.

Trump speaks out loud the mind of the capitalists

A long-suppressed tape recording of a phone conversation between former president Ronald Reagan with then-president Richard Nixon was recently released by the U.S. National Archives. The conversation took place in August 1971, when Reagan was governor of California. They spoke on the occasion of the admission of the People’s Republic of China to the United Nations after being kept out by Washington since the victorious Chinese revolution of 1949.

Reagan, referring to African members of the Security Council, said to Nixon: “Did you see those monkeys? They’re not even comfortable wearing shoes.” Nixon gave a big laugh. Reagan knew enough not to say that out loud publicly. But today, Trump says it out loud, referring to African nations as “shithole countries” or saying, “Go back where you came from,” to four women-of-color representatives.

Chapters from the history of capitalist racist politics

It is not only Trump, Reagan and Nixon who have been racist. They are following in the footsteps of generations of ruling-class political heroes. Franklin Delano Roosevelt, the most liberal president of the 20th century, ordered the Ponce Massacre of Puerto Rican nationalists in 1937. In pursuit of imperialist war with Japan, Roosevelt had over 120,000 Japanese people rounded up and sent to concentration camps and had their property seized.

Abraham Lincoln, the most progressive president of the 19th century, ordered the attack on the Dakota Indians of Minnesota in 1862 and oversaw the Dakota Removal Act even while pursuing the Civil War against the slavocracy.

Theodore Roosevelt was an arch-colonialist who oversaw the conquest of Cuba and Puerto Rico and the massacres during the seizure and annexation of the Philippines. Roosevelt considered people of color inferior.

Woodrow Wilson, another lionized hero of liberalism, showed the racist, pro-South, pro-Klan, pro-slavery movie “Birth of a Nation” in the White House in 1915. The movie, based in part on a history book written by Woodrow Wilson, quotes Wilson on a title card praising the “great Ku Klux Klan.” Some say the movie fostered the rise of the Klan which followed.

Of course Trump is often seen on TV in front of a painting of Andrew Jackson. Using the Indian Removal Act of 1830, Jackson had the Cherokee tribe removed from east of the Mississippi and driven to Oklahoma in the “Trail of Tears.”

Of course there is George Washington, first U.S.president. who was the biggest owner of enslaved people in the 13 colonies.

In this list, we must not forget Bill Clinton, who destroyed welfare, promoted legislation leading to mass incarceration and declared that the “era of big government” is over.

Aspects of the subjugation of oppressed people in the U.S.

Capitalists and slave masters alike have used racism since the beginning of the country. The settlers who colonized the U.S., the Pilgrims and the 20,000 Puritans who piled into New England, all carried out unspeakable atrocities to subdue the Native people while slandering them as “savages” and subhuman.

This was to justify the slaughter of New England tribes, the Wampanoag, Narragansett and Algonquin, among others. Thousands of Native people in Massachusetts alone were killed.

The New England massacres were the beginning of a continent-wide offensive which spread from western Florida to the Midwest to Arizona to California and lasted until the 1890s. Millions of Native people were either killed or removed to reservations.

The number of African people enslaved in the U.S. grew from the 388,000 who survived the Middle Passage and were originally brought to the U.S. in chains, to 4.4 million at the outset of the Civil War. There are now over 45 million African Americans in the U.S.

Asians were brought to Hawaii and the West Coast as laborers during the 19th century. After the Great Depression of 1873, the racist Chinese Exclusion Act of 1892 promoted anti-Chinese riots and lynchings on the West Coast.

The northern half of Mexico was annexed by Washington in 1848 by conquest. The Southwest Latinx people became a subject population.

Students of working-class history are familiar with the divide-and-conquer methods of the bosses. From the early 19th century, the law declared any gathering of three or more workers as an illegal conspiracy.

When the workers defied this restriction and went on to organize, the bosses expanded their tactics. They hired Pinkerton thugs and other labor spies to frame up workers and break unions. They tried to turn the unorganized against the organized. They pitted the higher paid against the lower paid. They set the skilled against the unskilled.

The racism of Trump and the ruling class must be put in the anti-working class setting in which it has always existed. It is the answer of a tiny minority of the rich, exploiting class to the fear of rebellion by the vast majority of the masses of people. Only class solidarity and international solidarity can overcome this poisonous racist division.