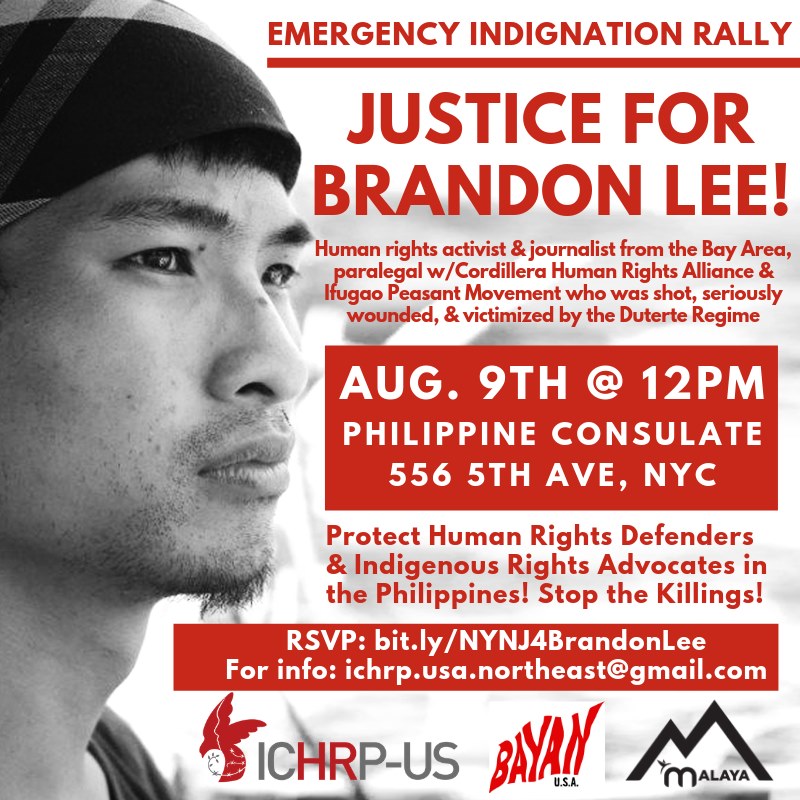 Emergency Indignation Rally to Demand Justice for Brandon Lee and All Human Rights Defenders & Indigenous Rights’ Advocates in the Philippines!

On August 6, Brandon Lee—a Chinese American journalist and indigenous rights’ advocate in the Philippines—was shot four times, in front of his home after picking up his daughter from school, by suspected elements of the Armed Forces of the Philippines. He is a U.S. citizen, father, and husband as well as a longtime community organizer with League of Filipino Students and a San Franciso State University alumni from the Bay Area. In 2010, Brandon moved to the Philippines to support the indigenous Ifugao tribes in their fight against large-scale mining companies, foreign agribusinesses, and hydro-dam projects in the Cordilleras of Northern Philippines.

Through Duterte’s Executive Order 70, which has formalized a new counterinsurgency program, “Oplan Kapanatagan”, the Philippine government has taken on a “whole of nation approach” by enlisting all government agencies and institutions to intensify surveillance, harassment, and attacks against ordinary people they deem as anti-government or “communist rebels”. In reality, it is people like Brandon who are simply organizing to defend the rights of oppressed and exploited peoples and demand genuine change that are being targeted and killed by US-backed Philippine security forces and government-sponsored armed vigilantes.

We call on all people who believe in human rights to join us in condemning this violent attack on Brandon Lee and all human rights defenders in the Philippines and hold the government accountable!

Please join ICHRP US Northeast, Malaya Movement NE, and BAYAN USA NE as we express our condemnation, grief, and outrage against this latest attack against activists in the Philippines under President Duterte. We will be holding this protest on August 9—the International Day of the World’s Indigenous Peoples—to demand justice for Brandon and all human rights defenders and indigenous rights advocates in the Philippines.

Please make a donation to support Brandon and his family for the cost of medical expenses and other expenses that may accrue:
https://www.gofundme.com/f/4bfk5-fundraising-for-brandon-lee