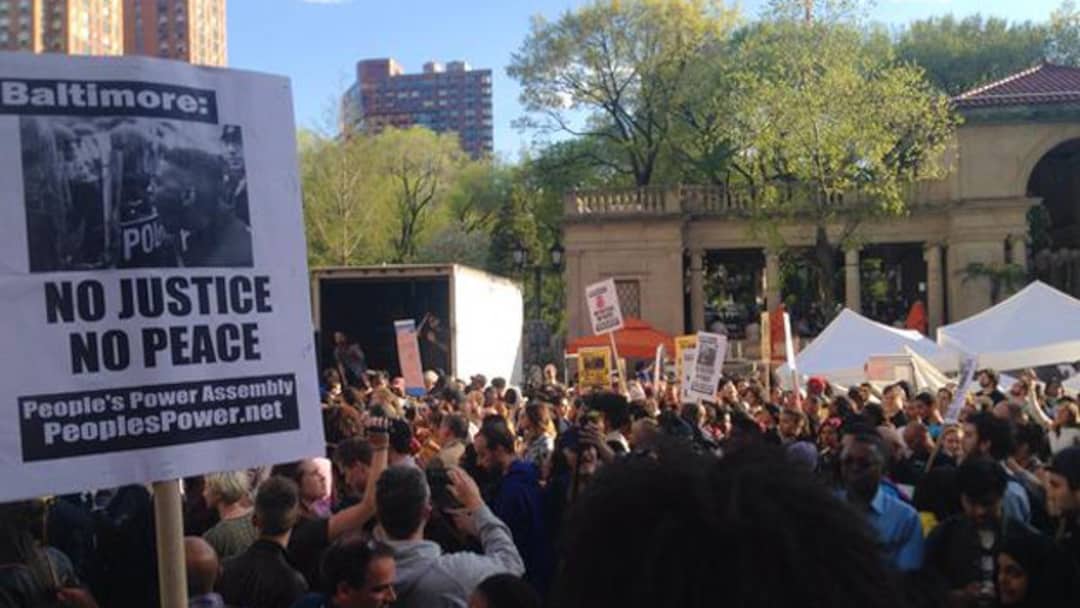 Trump’s repeated attacks against Baltimore and Maryland congressperson Elijah Cummings have the smell of fascism. Describing the Black-majority city of Baltimore as a “very dangerous & filthy place,” the White House bigot also tweeted that “no human being would want to live there.”

Trump is telling his supporters that Baltimore’s 400,000 African Americans are less than human, maybe three-fifths of a person, as was specified in Article 1, Section 2 of the U.S. Constitution.

The billionaire president called the city that was the home of Frederick Douglass and Billie Holiday a “rat and rodent infested mess.” Whenever Trump uses the term “infested,” he refers to places with Black people and other people of color. One of Hitler’s favorite phrases was “Jew infested.”

I lived in Baltimore for six-and-a-half years, from 1978 to 1984 and have gone back frequently to visit. I saw how the city was made poor by deliberate deindustrialization and massive housing foreclosures by the banks.

When I arrived in Baltimore, Bethehem Steel’s Sparrows Point plant just outside the city employed over 17,000 workers.

The Guiness Book of World Records in 1969 described it as the world’s largest steel plant, with an annual capacity of nine million tons. The Golden Gate and San Francisco-Oakland Bay Bridges were built with steel from Sparrows Point.

Bethehem’s shipyards at the Point and Key Highway—in Baltimore’s Inner Harbor—employed thousands more. Nobody does now.

After years of dwindling employment, the great steel mill completely closed in 2012. The shipyards had shut down earlier.

In their place is an Amazon warehouse at Sparrows Point with 2,000 workers. They make half the pay of the union members at the former steel mill and shipyards, with almost none of the benefits.

A key player in Bethlehem Steel’s destruction is Trump’s commerce secretary, Wilbur Ross. This vulture capitalist owned the Sago coal mine in West Virginia, where 12 miners were killed in 2006.

In 2003, Ross got rid of health care for thousands of Bethlehem’s retirees and spouses. The U.S. government’s Pension Benefit Guaranty Corp. took over their pensions and cut them.

Like dozens of cities in the Midwest and Northeast, Baltimore was devastated by plant closings. Between 1957 and 2012, the Baltimore area lost 160,000 manufacturing jobs.

Many of the workers who lost their jobs were African American. Fifty years ago, 35 to 37 percent of the United Steel Workers members in Maryland were Black. (“Toil and Trouble: A History of American Labor” by Thomas R. Brooks)

Thousands of workers lost their jobs when GM’s Baltimore assembly plant on Broening Highway closed in 2005. Armco’s stainless steel plant in East Baltimore shut down in the 1990s. So did the Koppers plant at Bush and Hamburg streets.

That’s a big reason why the majority of Black families in Baltimore, like those in Detroit and Milwaukee, were homeowners. But in the last fifteen years, thousands of African Americans in Baltimore have had their homes stolen by banks through foreclosures. In just the first six months of 2007, foreclosures increased five times.

Wells Fargo is the biggest criminal. Half of the bank’s foreclosures in 2006 occurred in neighborhoods that were at least 80 percent African American. That’s because 65 percent of its Black customers had high interest rate loans compared to only 15 percent of its white customers.

Now there’s a new slumlord on the scene: the Kushner family. More than 20,000 people live in the 15 complexes the family owns, most just outside Baltimore city in surrounding Baltimore County.

The Kushners viciously evict tenants, have taken hundreds to court and garnished their wages. They sued Joan Beverly, who was dying of cancer, for back rent. Some of their buildings have dangerous mold and others, to use Trump’s words, are a “rat and rodent infested mess.”

Unitil January 2017, Jared Kushner was the chief executive of the Kushner Companies. He is still a son-in-law of Donald Trump.

It wasn’t just automation or even capitalist decay that destroyed thousands of jobs in Baltimore. Big business was determined to drive Black workers out of basic industry.

In the early 1980s, Western Electric switched over from making copper cable for telephones to manufacturing optical fiber. Thousands of jobs were lost at both Western Electric’s Baltimore plant and its Kearny, N.J., plant near the Black-majority city of Newark. I lost my job in a Baltimore foundry that sold a quarter of its castings to Western Electric.

Instead of making the new optical cable in either Baltimore or Kearny, production was shifted to Omaha, Neb., whose population was 84 percent white in 1990.

The biggest employer in Baltimore today is Johns Hopkins Hospital, with over 30,000 employees. Thousands more work at Johns Hopkins University.

They’re named for a former slave master who was one of the owners of the Baltimore and Ohio railroad, now part of CSX.

Hopkins Hospital didn’t allow any Black physicians to practice until Dr. Roland Smoot was given admitting privileges in 1966. Over the past decade, it has sued nearly 2,500 poor people for unpaid hospital bills while it gets over $2 billion a year in federal funding. Hopkins is now trying to bust a union organizing drive by its nurses.

A city of struggle

Trump’s racist attacks are all the more painful because Baltimore was a totally segregated city until the early 1960s. Black people couldn’t shop downtown.

The late Bob Cheeks, who played for the New York Giants and had a masters degree in English Literature, told me he couldn’t enter a movie theatre. He was wearing his U.S. Army sergeant’s uniform at the time.

When I came to Baltimore, there were four department stores at Lexington and Howard streets, one on each corner. Within a few years, they were all closed, hardly 20 years after African Americans could first shop in them. The former busy shopping corridors of Howard and Lexington now seem like a ghost town.

But Frederick Douglass’ hometown is also a city of struggle. In 1979, Bob Cheeks, as head of the Baltimore Welfare Rights Organization, helped lead a drive for rent control.

Despite the landlords spending a million dollars, a majority of people voted in a 1979 referendum to limit rents. But a judge immediately called it illegal. That’s the sort of “democracy” that Trump likes.

In 2015, Black people righteously rebelled against the police killing of Freddie Gray. The people of Baltimore, along with the entire multinational U.S. working class, will defeat all the Trumps.