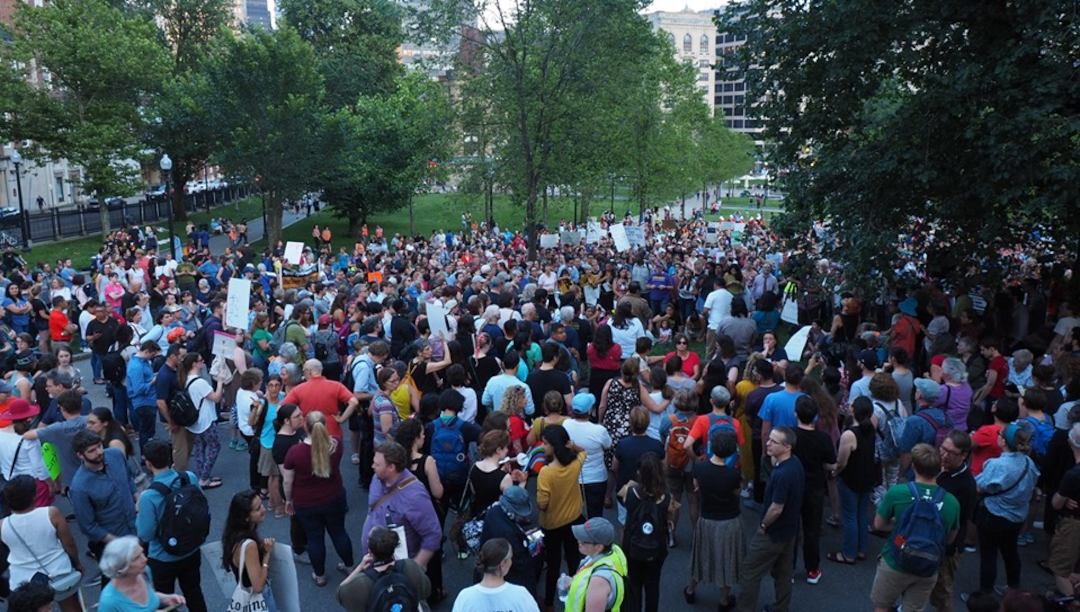 Talk given by the co-leader of United American Indians of New England at the Massachusetts State House in Boston on July 12 at a vigil to close migrant detention camps.

I’m glad to see you here tonight, and to know that people are turning out at hundreds of events like this all over the United States.

We demand an end to the torturous conditions of children and adults caged in government detention centers. We are here to demand an end to the vicious raids and deportations that Brown and Black migrant communities have experienced for many years now, even before Trump came along. And we are here to demand life instead of death for the desperate asylum-seekers trying to cross the U.S.-Mexico border.

The borderlands where people are dying are not our Indigenous borders. I remind you that many of those suffering are Indigenous, not Hispanic or Latinx. Many do not even speak Spanish but instead speak their own Indigenous languages. They have ancestral rights to cross freely.

If you think that the kind of human rights abuses happening in the U.S. right now are unusual or exceptional, you are wrong. Our Indigenous families were separated for generations as a matter of U.S. government policy, our Indigenous children stolen and forced into residential schools or adopted by white families or put into foster care.

Did you know that there were concentration camps for Indigenous people, including right here in the Boston Harbor on Deer Island in the 1670s? There were concentration camps for Indigenous peoples when we were  herded onto reservations to starve, and when our ancestors were captured and imprisoned in places such as Fort Sill in Oklahoma.

There were concentration camps for Black people during and after the Civil War. Even after being supposedly freed from slavery, Black people were forced by Union Army soldiers into so-called contraband slave camps in the South, where they died by the thousands of starvation and disease and being worked to death.

And during World War II, 120,000 people of Japanese ancestry were rounded up by the U.S. government, their property seized, and they were locked into isolated camps for years.

I’m sure all the guards and soldiers who guarded those concentration camps of the past said they were just following orders, the same as the Nazis. I’m sure there were individuals and companies that filled their pockets as a result of this misery.

I want to ask everyone here to commit to authentic resistance to what is happening. From a place of love and solidarity, let’s all accept migrants and refugees as our most beloved family, as our children and siblings and parents, regardless of where they come from.

Writing letters to politicians is not going to be enough to help our beloved family and spare them more trauma, is it? This is an emergency. We need to be bold, not meek, in order to save lives!

We can follow the example of the Wayfair workers who recently walked out, and of the Latinx, Black, Jewish and other youth who have been arrested at ICE facilities. We can refuse to collaborate with or spend money with any individual or company who supports these concentration camps and raids, anyone who is profiting from the imprisonment of our refugee relatives.

Let’s support the frontline community organizations that are already doing this work and put ourselves on the line, too. Commit now to finding out what you can do and how you can help.

We are so strong when we join together. Let’s close the camps now!