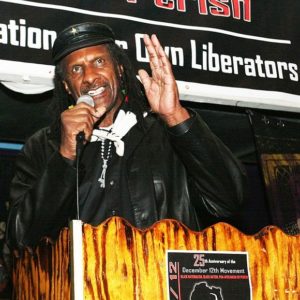 Two hundred people came to the historic House of Lord Church in Brooklyn, N.Y., on June 20 for a memorial tribute to Field Marshall Coltrane Chimurenga.

Comrade Chimurenga was a leader of the December 12th Movement who passed away on May 13. He was a revolutionary Pan-Africanist who never stopped fighting for Black people and all oppressed people.

He had a special love for the people of Zimbabwe. For decades, Chimurenga supported the liberation struggle in the African country and later defended the Zimbabwe African National Union-Patriotic Front (ZANU-PF) revolutionary government against the attempts of U.S. and British imperialism to overthrow it.

In the last weeks of his life, Comrade Chimurenga did everything he could to build the May 25 march in Washington, D.C., against the U.S. sanctions that are attempting to strangle Zimbabwe.

He expressed a desire to be buried in Zimbabwe and Zimbabwe’s government agreed to do so. Comrade Chimurenga was buried in the Harare Provincial Heroes’ Acre on June 20 and was given a 21-gun salute by the Zimbabwean military.

At the ceremony, ZANU-PF Secretary for External Affairs and former Foreign Affairs Minister Comrade Simbarashe Mumbengegwi declared that “he was a selfless cadre who decided to fight for the interest of Zimbabwe during and after independence.”

Omowale Clay, a comrade of Coltrane Chimurenga and a December 12th Movement leader, chaired the tribute in Brooklyn. Jazz compositions filled the church as the Robert Rutledge Quartet gave a wonderful performance.

Later on the rhythms of the Drum Love Movement became part of the tribute.

Santina Peyton gave libations, with members of the audience calling out the names of liberators like Denmark Vesey and Malcolm X. The Rev. Karen Daughtry welcomed people to the House of the Lord Church, where many important meetings for African liberation and against police terrorism have been held.

Dorothy Roberts, also known as Shona, spoke of her partner, Coltrane Chimurenga. They met when they were students at Harvard University. Their sons, Amilcar and Camillo Chimurenga, told what a wonderful father he was.

Speaker after speaker spoke of Field Marshall Chimurenga’s outstanding courage and discipline. Among them was December 12th Movement Chairperson Viola Plummer and a fellow member of D12’s International Secretariat, Roger Wareham. Chimurenga’s fierceness was combined with an intense love for Black people.

A 1984 incident stood out. Five hundred cops and federal agents staged terror raids in New York City’s Black communities to round up defendants for the New York 8 “plus” attempted frame-up.

One high-ranking New York police officer ― a “white shirt” ― was pointing a machine gun at Sistas’ Place in Bedford-Stuyvesant. Field Marshall Chimurenga came out and ordered the pig to “lower the motherfucking gun” before pushing the weapon to the ground.

Coltrane Chimurenga, Viola Plummer, Ruth Carter, Omowale Clay, Yvette Kelley, Jose Rios, Robert Taylor and Roger Wareham faced fantastic charges of conspiring to rob banks and Brinks’ trucks, and to stage jailbreaks. Even their political activity was claimed by the government to be a violation of the Racketeer Influenced and Corrupt Organizations (RICO) Act!

This frame-up was part of the Reagan administration’s drive to crush all liberation movements. Federal district attorney and future New York mayor and Trump mouthpiece, Rudolph Giuliani, organized the inquisition.

Eight grand juries were held in an attempt to get around rules that spouses can’t be forced to testify against each other. Giuliani hoped to force spouses to give lying testimony on the other defendants instead.

But this tactic blew up in Giuliani’s face. People went to jail instead of becoming lying snitches. It’s to recognize these courageous grand jury resisters that this case is called the New York 8 “plus.”

Defense lawyers Margaret Burnham and Lennox Hinds exposed the prosecution’s lies while Omowale Clay defended himself. Reagan and Giuliani were defeated as Field Marshall Chimurenga and the other defendants were acquitted of all conspiracy charges.

A moving tribute to Coltrane Chimurenga from Lennox Hinds was read at the memorial.

Reagan’s and Giuliani’s attack didn’t stop “Chim” and his comrades. With the CIA pouring crack cocaine into Black and Latinx communities, Chimurenga started the Black Men’s Movement Against Crack along with Viola Plummer and the late Abubadika Sonny Carson.

Several speakers at the memorial told how BMMAC members, often led by Coltrane Chimurenga, would shutdown crack houses by any means necessary.

In response to the lynching of Michael Griffith in Howard Beach; the gang rape of Tawana Brawley; the police killing of grandmother Eleanor Bumpers for owing $394.60 in back rent; and other atrocities against Black people, a “Day of Outrage” was organized in 1987 by activists. Among them were  the late Elombe Brath and Abubadika Sonny Carson; the Rev. Lawrence Lucas; Viola Plummer; and Coltrane Chimurenga.

New York City was shut down by hundreds of people as subways and bridges were tied up. Much of the planning was due to Chim, whose leadership in demonstrations earned him the title of Field Marshal.

Before he moved to the East Coast, Chimurenga was a leading activist in the San Francisco Bay area.

Former political prisoner Sekou Odinga, who spent 33 years in jail, told how he had known “Chim” over 40 years ago in California. Chimurenga helped organize the San Francisco rally for the first African Liberation Day in 1972.

Pam Africa from the MOVE organization and International Concerned Family and Friends of Mumia Abu-Jamal came from Philadelphia to honor her friend and comrade, Coltrane Chimurenga.

The national presiding minister of The House of the Lord Churches, the Rev. Herbert Daughtry, spoke of his friend Coltrane Chimurenga. Omowale Clay reminded Rev. Daughtry of the stirring sermon the minister gave at the funeral of Shaka Sankofa, who was executed by George W. Bush on June 22, 2000.

Dr. James McIntosh brought greetings from the National Coalition of Blacks for Reparations in America (N’COBRA).