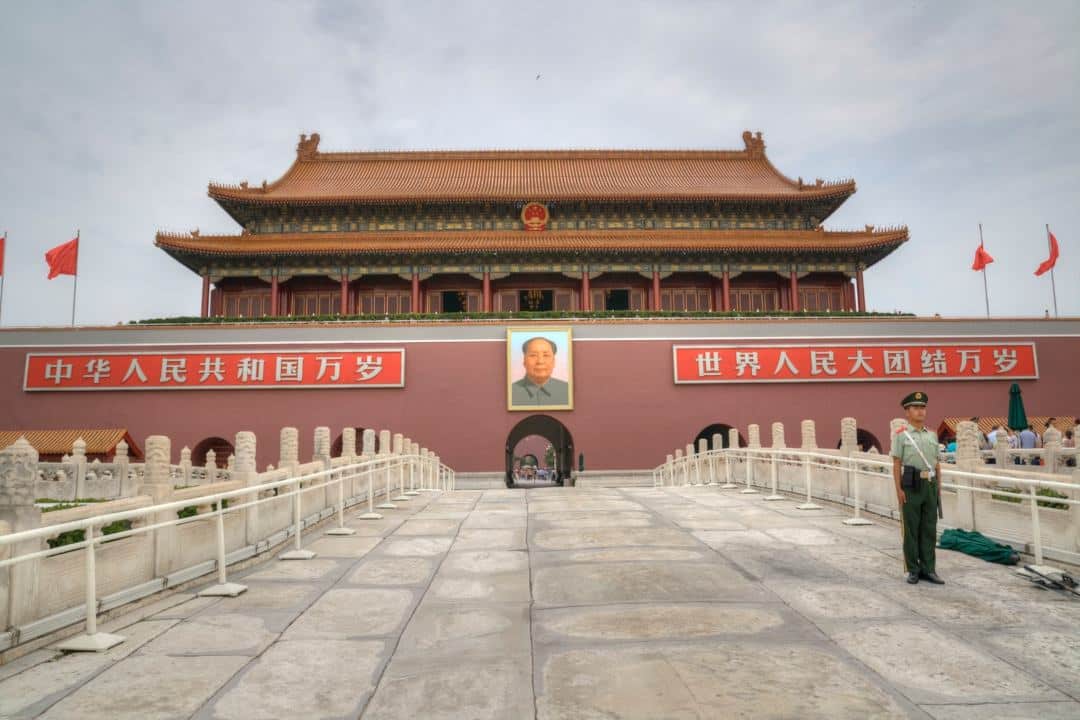 Yes, a picture is worth a thousand words. But what happens when the words that the pictures are shouting out do not fit their intended use? In that case, the narrator has to supply the words, urging, “Don’t believe your lying eyes.”

An excellent example comes from the corporate media narrative of the incidents that occurred in Beijing’s Tiananmen Square in 1989.

Once again the corporate media are dusting off their anti-communist campaign of blatant lies and misinformation to sell the U.S. government’s line about supposed massacres carried out by the Chinese Communist Party 30 years ago.

Since 1989, however, irrefutable evidence — from Wikileaks documents to eyewitness reports — has exposed the blatant falsehoods promoted as gospel truth by Western capitalist governments and their loyal media.

So this time around, the rehashing of the lie had to be tweaked a little — not with actual evidence, but through implication only, sometimes using photos to carry on the “massacre” narrative.

Let’s start with the Wall Street Journal. In the May 30, 2019, issue, the foreboding headline read: “Images Hidden for 30 Years — Liu Jian took memorable photos around Tiananmen Square in 1989. Then he tried to forget them.”

Liu Jian’s photos were taken at the end of May 1989, right before the so-called massacre in Tiananmen Square. At the time, media like the Washington Post, on May 21, 1989, were saying troops were “sent into the streets to crush the student movement.” (Archived article accessed at DC Public Library)

Here are the most (implied) haunting examples of the 11 photos presented, with captions supplied by the Wall Street Journal: 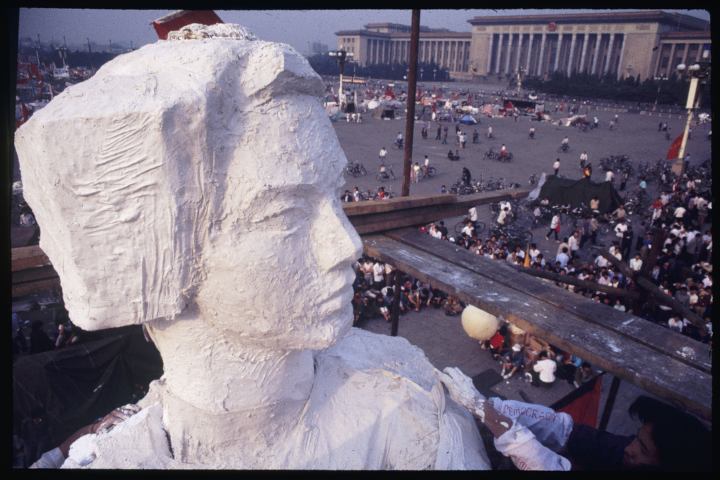 Students worked to build the Goddess of Democracy statue in Tiananmen Square, around May 28.

This caption doesn’t mention that the buses were provided by the government to shelter the protesters when it rained, along with crews to help clean up the square while it was being occupied to keep conditions sanitary.

Here are more supposedly dramatic photos taken of protesters with soldiers. However, the drama is more dependent on the creative interpretation of the caption:

I just don’t see it. Having been in many face-offs with robocops at protests here in the U.S., where the police try to look more like pitbulls than human beings — sorry, pitbull lovers  – all I see here are protesters holding hands and dialoguing rather than holding off some imminent attack by military vehicles.

The fact is that if you scour the mainstream media, you can find not one photo or video of anyone shot or trampled by a tank in Tiananmen Square.

Journalists who helped perpetuate the massacre myth began confessing in 2009. Two years later, Wikileaks exposed cables showing the U.S. government, just a few days after June 4, 1989, had evidence of the fabrication. So the narrative began to evolve.

However, up until that point — for a period of 20 years! — the story of the “massacre in Tiananmen Square” was carried as one unified declaration of truth coming from the New York Times, CNN, the Washington Post, the BBC and other Western corporate media — and, unfortunately, repeated by folks on the left who shouldn’t have been so gullible.

Once the truth began leaking out, some journalists, feeling the weight of what was finally being exposed, started admitting that they had lied or withheld the facts about Tiananmen Square.

Here’s one such admission, reported on CBSNews.com on June 4, 2009, from Richard Roth. In 1989, Roth was the CBS News correspondent covering events in Beijing on June 3 and 4. He had been briefed by anchor Dan Rather about the approved narrative of events at Tiananmen Square before Rather went on to broadcast these fabrications to the world:

“Dawn was just breaking. There were hundreds of troops in the square, many sitting cross-legged on the pavement in long curving ranks, some cleaning up debris. There were some tanks and armored personnel carriers. But we saw no bodies, injured people, ambulances or medical personnel — in short, nothing to even suggest, let alone prove, that a ‘massacre’ had recently occurred in that place.

“Later, being debriefed on-air by Dan Rather, I recall making an effort to avoid using the word ‘massacre.’ I referred to an ‘assault’ and an ‘attack.’ I reported what I saw; I said I hadn’t seen any bodies. Admittedly, I’ve never made a point of trying to contradict a colleague on the air; I’ve simply stuck to my own story, because I’ve believed it’s true.”

And if he didn’t make a point of “trying to contradict a colleague on the air,” it was undoubtedly because he cared about his career over any journalistic ethics regarding the truth.

What inspired Roth’s outbreak of journalistic conscience two decades later? It may have been another recanting that occurred two days earlier by BBC correspondent James Miles, who said: “We got the story generally right, but on one detail I and others conveyed the wrong impression. There was no massacre on Tiananmen Square. …

“Towards midday on 4 June, amid reports of widespread casualties, I wrote in another draft that ‘many of the deaths occurred at Tiananmen Square, not only from gunshots, but also from being crushed by tanks, which ploughed relentlessly through any obstacle in their way.’”

That “one detail” was a doozy. Let’s just say you out and out lied, James. Miles tries to cover this up with: “There was no Tiananmen Square massacre, but there was a Beijing massacre.”

This new take has become the latest unified tale evolved to fit the uncooperative facts that came to light.

There were, in fact, shots fired outside of the square, and there were hundreds killed according to Chinese government and medical sources. But not all of those shots fired were from soldiers and not all of those killed were protestors. No photos, videos or any evidence exists of a massacre or of soldiers firing indiscriminately on civilians.

The document published by WikiLeaks, dated July 12, 1989, was leaked to the media in 2011. It’s a cable from James R. Lilley, then U.S. ambassador to China, and puts events in a different context:

“During a recent meeting, a Latin American diplomat and his wife provided Poloff an account of their movements on June 3-4 and their eyewitness account of events at Tiananmen Square. …

“Gallo [a diplomat from Chile] said that he essentially was allowed free passage around the square, even when sighted by troops. …

“He said although he was seen, the troops paid no attention to him and he eventually passed back and forth across troop lines a couple of times. Another Chilean diplomat who stayed around Xinhuamen at Zhongnanhai had a similar experience. …

“He said that most of the troops which entered the square were actually armed only with anti-riot gear — truncheons and wooden clubs; they were backed up by armed soldiers. …

“Gallo said wounded, including some soldiers, continued to be brought to the Red Cross station. …

“Although gunfire could be heard, Gallo said that apart from some beating of students, there was no mass firing into the crowd of students at the monument. When Poloff mentioned some reportedly eyewitness accounts of massacres at the monument with automatic weapons, Gallo said that there was no such slaughter. Once agreement was reached for the students to withdraw, linking hands to form a column, the students left the square through the southeast corner.”

Why was force used by the Chinese army? After all, weren’t the students all nonviolent and unarmed?

If fact, there were plenty of photos supporting the Chinese government’s statements that soldiers were being attacked and killed and weapons were being taken by the so-called “peaceful” protesters. None of those photos were given prominence, if published at all, by mainstream media TV, radio or news publications. Photos like these: 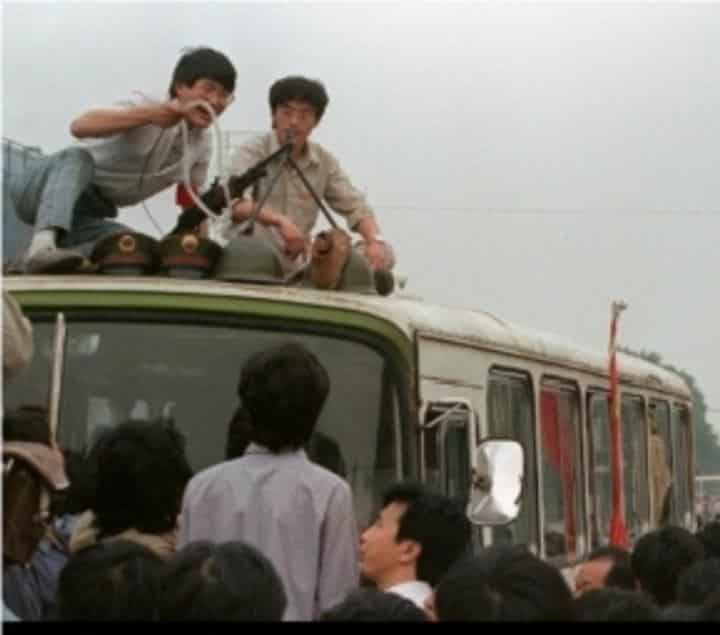 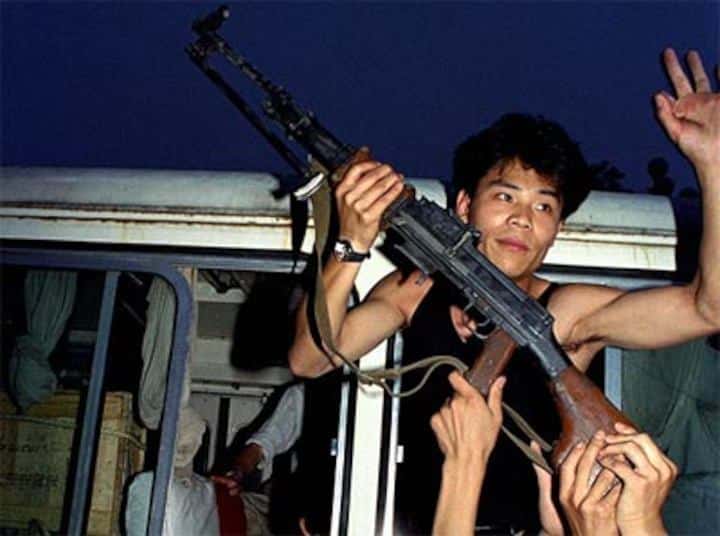 Or these, showing the use of Molotov cocktails and other methods by “peaceful” protesters to set tanks, buses and soldiers on fire after beating and stripping, then hanging them: 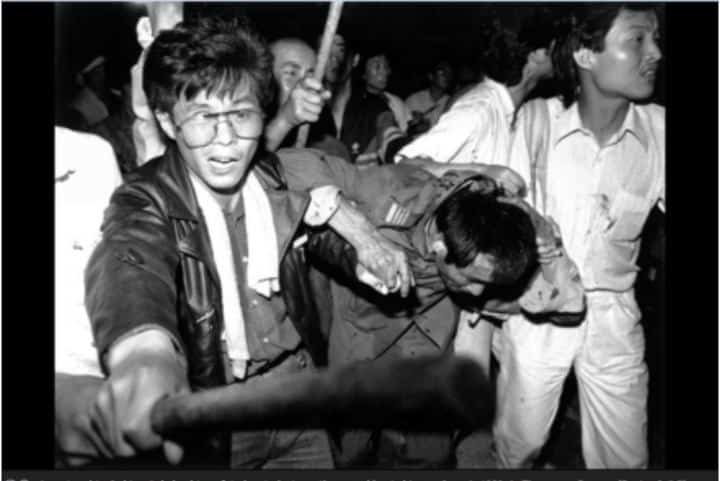 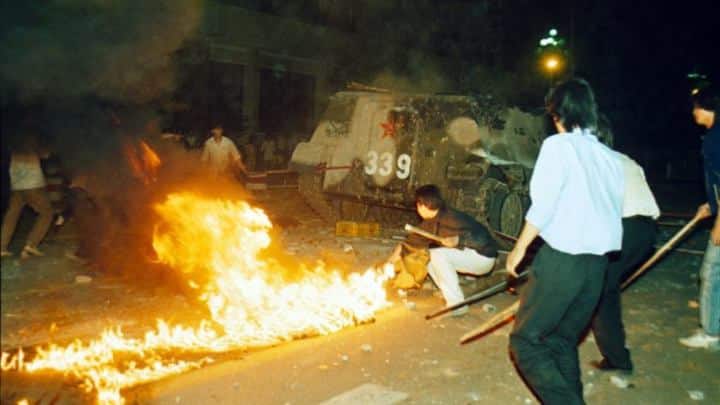 The pictures of stripped, hung and burned soldiers are too graphic to show without a warning, but here is where they can be seen at this article from Voltaire Network.

Knowing that the Voice of America had made technical and staffing arrangements allowing broadcasts to be repeated frequently over Chinese airwaves, U.S. officials may have believed that giving an impression that a civil war had started in China would further the overall aims of regime change.

That would explain the unusual and very temporary coverage of violence by the students in the Washington Post on June 5, 1989 (from the archive at DC Public Library):

“An indication of what may lie ahead for China can be seen in the venom with which Beijing residents turned on a people’s army that had moved against the people. … As columns of tanks and tens of thousands of soldiers approached Tiananmen, many troops were set on by angry mobs who screamed, ‘Fascists.’ Dozens of soldiers were pulled from trucks, severely beaten and left for dead.

Today, you won’t find any mention of that violence in the commemoration articles by the Post or any other corporate media, since now the unified “truth” is that the protesters were peaceful and unarmed.

Next: CIA influence — not all protesters were the same