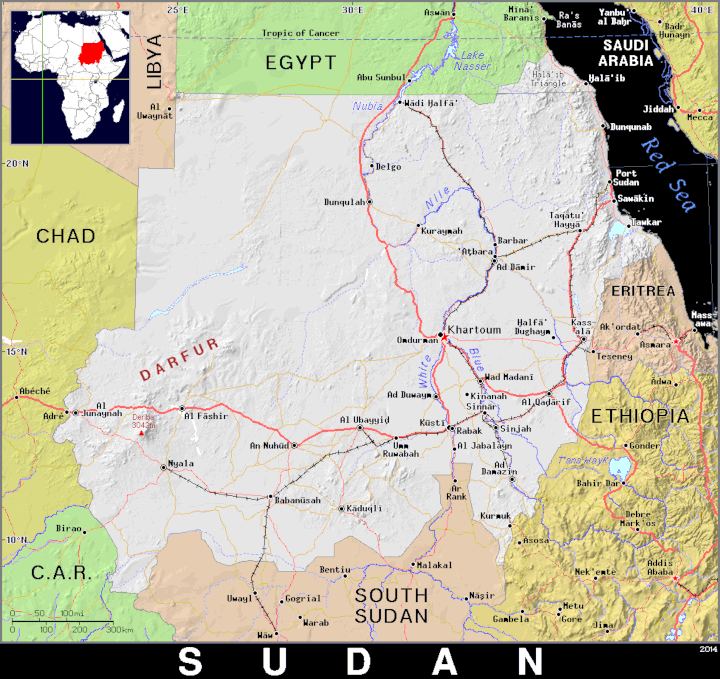 Protests continue in Sudan since a military junta overthrew the longtime al-Bashir government in early April. This article, originally published in 2007, provides important background on the role of imperialism in Sudan and the North African region.

Yet on May 29, President George W. Bush, in trying to promote U.N. sanctions against Sudan, accused the Khartoum government of the “bombing, rape and murder of innocent civilians” and said, “The world has a responsibility to put an end to it.”

This charge against Sudan comes from the commander-in-chief of an armed force that is carrying out genocide, rape, murder and bombing in numbers far outweighing what even the U.S. State Department alleges were committed by the Sudanese government. Currently millions of civilians have been either tortured or murdered directly by the U.S. military in Iraq, Afghanistan and U.S. occupied Guantánamo.

In contrast to this direct U.S. role are the charges against Khartoum: that a proxy grouping working at the behest of the Sudanese government is engaged in the violence.

Bush went further in regards to the violence on the part of the Sudan government: “My administration has called these actions by their rightful name: genocide.”

The prime motivation for U.S. intervention into Sudan has everything to do with that country’s rich resources and oil reserves rivaling those of Saudi Arabia.

Bush, speaking on behalf of the U.S. ruling class, with its oil, financial and military interests in Africa and Western Asia, was ready to give any excuse that would allow the U.S. access to the old and newly discovered oil wealth in the region. He would like as much as possible to put an international cover on U.S. designs for the region. Charges of genocide help force the U.N. to do as it finally did in Iraq and in the Balkans: help facilitate U.S. occupation there.

This is not the first time the Bush administration has tried to promote the charge of genocide against Sudan.

When former Secretary of State Colin Powell was used to level the “genocide” charge, a U.N. commission in 2005 investigating alleged atrocities said the Sudan government was not guilty of genocide. Many in the international community agreed with this U.N. commission.

What the U.N. did recently say last month about the crisis in Sudan, however, helps point the finger of genocide right back at the U.S. and other imperialist countries.

This June, the U.N. published an 18-month study by the U.N. Environmental Program (UNEP) that blamed environmental factors as the root causes of the violence in Sudan. It warned that inaction will spread violence well beyond Sudan’s borders.

The U.N. report found that the desert in northern Sudan has advanced southwards by 60 miles over the past 40 years and that rainfall in the area has dropped by 16-30 percent.

“It [the U.N. report] illustrates and demonstrates what is increasingly becoming a global concern,” said Achim Steiner, UNEP’s executive director. “It doesn’t take a genius to work out that as the desert moves southwards, there is a physical limit to what systems can sustain, and so you get one group displacing another.” (British Guardian)

The U.N. study also found that there could be a drop of up to 70 percent in crop yields, devastating areas from Senegal to Sudan.

Before rebel groupings attacked government forces in 2003, sparking the current civil war in Sudan, the rains had diminished and the desert was growing by over a mile per year.

Why didn’t the government of Sudan do more to avert this environmental crisis? One thing is for sure — British, French and U.S. interference in the affairs of Sudan had an extremely draining effect on its resources and ability to develop economically, let alone defend itself from natural disaster. Sanctions, such as those Bush is promoting, have been one of the means used to drain Sudan.

Sudan’s problems can be traced to its colonial past. After 1916, when Britain militarily gained full control over the Sudan as its colony, British rule depended on creating conflict and dividing the Muslim north from the Christian or animist south. It left isolated and unnourished what were then thought to be unprofitable regions like Darfur.

In another words, the British Empire did not allow the creation of an infrastructure facilitating government assistance to the region. Like Darfur today, these regions contained people who were all Muslim and possibly harder to divide.

Despite current claims to the contrary by U.S.-based propagandists, who want to promote the idea that this is a war between “white Arabs and Black Christians,” all the people in the Darfur region were and are people who look alike in terms of their dark skin and features. They are all Muslim.

The poverty and inequities facing Darfur have roots in the British Empire, as do the civil wars between the South and North of Sudan, whose combatants have migrated also to the Darfur region.

The more recent history of intervention by imperialist forces, especially the U.S., into Sudan should make everyone see through Bush’s hypocritical talk.

The current situation with this spread of war from the South of Sudan to the Darfur region was exacerbated greatly by U.S. military and financial support of the Sudanese People’s Liberation Army (SPLA) in southern Sudan. The SPLA was the nucleus for the Sudanese Liberation Army now fighting in Darfur. Fueled by U.S. dollars, that war in the South helped drain Sudan’s economy and discouraged the development of its oil resources.

The U.S. call for sanctions during a natural crisis has precedent. The senior Bush administration called for sanctions in March 1990, at exactly the same time a drought crisis occurred. Later, former President Bill Clinton pushed additional sanctions and went further by bombing Sudan in August 1998 and destroying its primary pharmaceutical plant.

The current sanctions by Bush Jr. hit 31 Sudanese companies, mainly companies that build and maintain Sudan’s vital infrastructure, including agriculture and transportation and the development of its oil resources, which could help provide money to avert the effects of the drought.

The U.S.-led U.N. sanctions against Iraq starting in 1990 are estimated to have killed 1.5 million people, including a half-million children. What effect sanctions will have on one of the poorest countries in the world is yet to be seen.

In the 1990s, while U.S. aid fueled the civil war in the South of Sudan, many Christian and other religious charities also sent their dollars to support rebel forces against the Sudanese government.

Likewise, today, the Bush-endorsed Save Darfur Coalition, a grouping led by Christian and Zionist organizations with some Hollywood and even African-American members, supports U.S. military intervention in Darfur. In spite of the overwhelming evidence that U.S. sanctions seriously damage developing countries, these groups encourage sanctions against Sudan.

Is there a better solution for Sudan? The U.N. commissioned another report by the U.N. Millennium Project, which calculated that extreme poverty could be ended in the entire continent of Africa with $189 billion. The supplemental appropriations passed by the U.S. Congress in May for the Iraq and Afghanistan occupations would cover most of that cost.

When the last G8 summit ended in Germany, the leaders of the imperialist NATO powers — including Britain and the U.S. — all agreed that climate problems on the African continent affecting Sudan existed and would continue to devastate more of the continent. Yet, they came up with no solutions.

Given that the U.S. and other imperialist countries continue to fuel the fire of natural disaster in Sudan while sitting on the very means to solve the situation, one could consider this a passive act of genocide against African people.