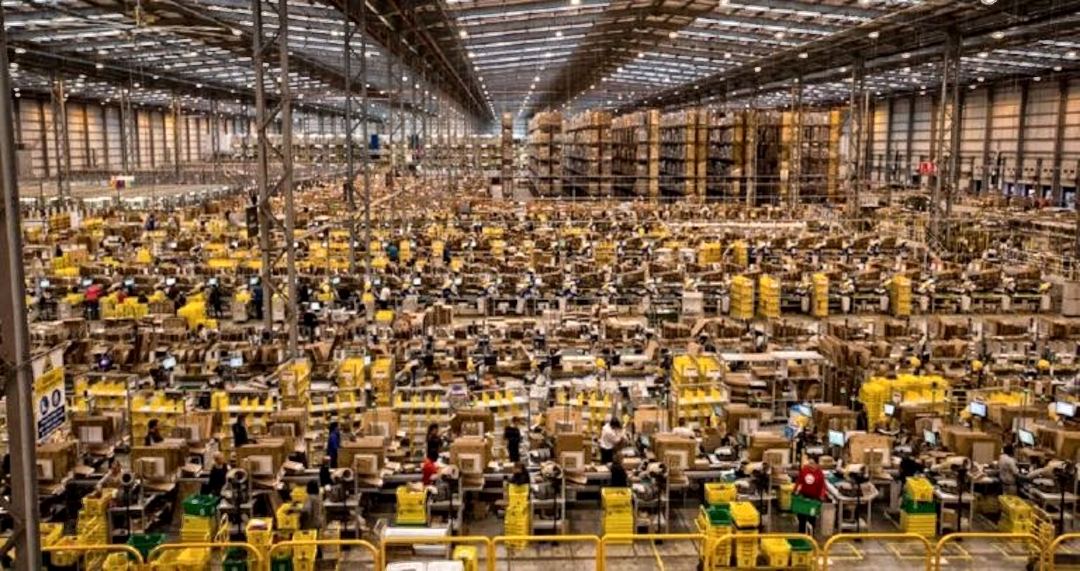 There are few things that illustrate the ethical bankruptcy of capitalism as much as Jeff Bezos’ obscene amassed wealth. Bezos is the richest person in the world, raking in $236 million a minute, with a net worth of $153-plus billion. His world empire is built on the backs of a brutally exploited workforce, wrested from the communities in which Amazon operates.

To put this into context: it would take $20 billion to end homelessness; $30 billion to end world hunger. If Jeff Bezos had $50 billion less, he would still have another $100 billion. The question is, how many pairs of shoes can one wear, how many yachts can one sail on, how many houses can one person live in? The absurdity is obvious.

If you think that Bezos’ wealth trickles down in the form of taxes that provide services, note that this year Amazon paid $0 on $11.2 billion in profits and received a $129 million dollar return.

How do we fight back?

No one can deny that it has been a difficult period for working-class struggle. Workers are forced to compete with each other globally, which has lowered wages and disempowered workers. If autoworkers complain in Detroit, auto bosses threaten to move to Mexico or to some other place where labor costs are lower. To make matters worse, giants like Walmart, FedEx and Amazon seem to have endless resources to thwart unionization.

We have also seen decades of defeats for unions to the point that union membership has dwindled to 10.7 percent, with the private sector dropping to 6.4 percent, leaving younger workers with little understanding of what being organized means.

There are now approximately 351,000 Amazon workers worldwide and 280,000 in the U.S. alone. These figures are growing every day and are already out of date.

There are thousands of Amazon warehouse workers laboring under one roof, part of the logistics supply chain, making the power potential enormous. The “just-in-time” and “lean production” methods that now dominate the supply chain can give us the upper hand.

While technology has created a global working class, it has also opened up the means to organize and communicate worker-to-worker on a worldwide basis.

That process is beginning.

Amazon is unionized in many of the European countries, and workers’ strikes and struggles crossed borders in this past year. On Nov. 23, 2018, “Black Friday,” Amazon warehouse workers went on strike and held protests in Germany, Spain, Italy and the United Kingdom under the slogan of “We are not robots.” Amazon workers from Poland have organized with German workers.

The following are modest proposals:

There are many unions, which to their credit are looking at unionizing or representing Amazon workers, including the Retail, Wholesale and Department Store Union, the Teamsters, the International Longshore and Warehouse Union, the Service Employees International Union, the American Postal Workers Union and the Communication Workers of America. (There may be others that I have left off or some on this list who are not currently actively engaged.)

What’s needed is a “National Union Coordinating Council” that includes all interested unions and the AFL-CIO leadership. Sectarian interests have to be set aside so that those who are committed can share resources, build adequate funds, engage in public campaigns and work jointly both nationally and locally.

An organized Amazon could revive the union movement and reverberate in all sectors, and no one union, whatever its size, can do it alone.

It’s a big job for those of us who are community members and Amazon workers to convince the unions, but it’s an important challenge.

While the traditional trade union movement remains an important tool for workers, we should look for every avenue possible to advance workers’ power.

The Somalian workers demanding justice in Shakopee, Minn., outside of Minneapolis, are an exciting example. Through the Atwood Center, which represents East African workers, and with community support, they staged protests and successfully forced concessions from Amazon. The workers and the Center have led several protests and more recently, on March 10, 2019, a three-hour strike of workers in the stow department.

This was preceded by campaigns in Seattle, which set the stage for public pressure, most notably by Bernie Sanders, that led to Bezos’ announcement of raising wages to $15 an hour. Recently, widespread community protests in New York City against the building of a second Amazon headquarters forced Bezos to cancel the plans. Protests were aimed at making Amazon accountable to the community.

What are some of the concrete challenges in the Baltimore warehouses? Why would a community approach that is aimed at these workers be helpful, maybe more than any other at this point?

First, Amazon is largely a revolving door when it comes to workers; thousands of its workers are precarious, cycled back and forth between the community and seasonal work. You can ask almost any working-class family in Baltimore, and they have a relative or know someone who has worked at Amazon or is working there now.

At one warehouse, high school students worked the all-night shift, so that they could attend school during the day. The work is brutal, and it’s also common for people to work several months or even less before being forced to quit. Write-ups for failure to make production rates are done to weed out slower workers.

It makes exploitation at Amazon a community affair. The advantage of communitywide organizing is three fold: one, it serves as general education and organization; two, it provides the necessary rock-solid support that can encourage struggle inside (We’ve got your back!); and three, it harnesses broader working-class power against Amazon.

Finally, it may just be this kind of experimentation that revives a new chapter in working-class organizing in the U.S. Remember the heroic “Rising of 20,000” young women garment workers in 1909. Before this general strike, it was thought that women were incapable of being organized. And don’t forget the sit-down strikes, a new tactic that turned the labor movement upside down and paved the way for industrial worker organizing.

My appeal to youth

There is a whole new generation of youth who have turned against capitalism as a viable system precisely because it has offered them nothing. Many of them see themselves as socialists and some as revolutionaries.

Think of getting a job at Amazon!

If you can commit to staying and doing the patient work of organizing even better. But at a minimum, an Amazon warehouse job will give you the kind of education and understanding of exploitation that’s better than any textbook can do alone. It will increase your ability to empathize with and understand other workers. It will teach patience, humility and respect.

There are lots of mistakes that we will all make, of that I’m sure, but there is no simple road to changing the world and no way to do it without the working class.

The series “Eyewitness Amazon” was written by Sharon Black, a former Amazon worker.  The series began while the author was working but the conclusion was written after she was forced to resign as a result of several write-ups for failure to make production quotas in the “picker department.”