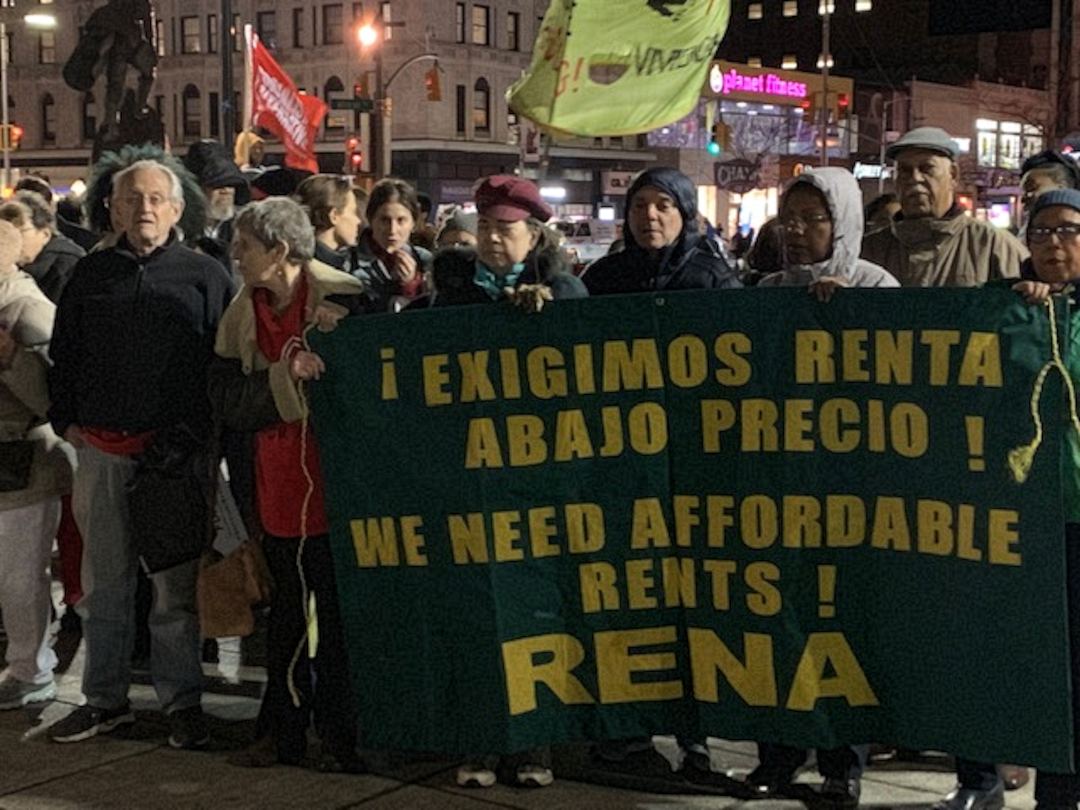 Hundreds of people marched down Harlem’s Adam Clayton Powell Jr. Blvd. on April 11 in a Moral March for Housing. They shouted, “Housing is a Right! Fight! Fight! Fight!” and “Get up! Get down! There’s a housing crisis in this town!” They also chanted “¡Aquí estamos y no nos vamos!” (We are here and we’re not going away!), and other slogans in Spanish.

The marchers were Asian, Black, Latinx and white. They represented every family and individual who have been rent gouged.

While Andrew Cuomo has been the state’s governor, evictions have rocketed from 4 to 104 every single day.

Evictions can mean death. Sixty-six-year-old Black grandmother Eleanor Bumpurs was killed by two shotgun blasts fired by policeman Stephen Sullivan on Oct. 29, 1984, during an eviction in the Bronx.

Police forced marchers off the street, but the people refused to be intimidated. They ended up at the Adam Clayton Powell Jr. Harlem State Office Building on 125th Street, where a rally was held.

Marchers had departed from the historic Abyssinian Baptist Church, where at least a thousand people had gathered for housing justice. Tenant organizers, members of the clergy and elected officials spoke out against the massive ethnic cleansing that has driven hundreds of thousands out of New York City.

According to the Institute for Children Poverty and Homelessness, 28 percent of New York City’s tenants pay at least half of their income in rent. Behind even the biggest landlords are the banks and insurance companies that own the mortgages.

In the capital of capitalism, where a hedge fund billionaire recently bought a penthouse overlooking Central Park for $238 million, over 22,000 children sleep every night in homeless shelters.

Tenants and their supporters are demanding that nine laws be passed by the New York state Legislature to fight massive rent increases. Among these needed measures is universal rent control throughout New York State.

For fifty years, the number of rent controlled apartments in New York City has sharply declined through legal schemes to benefit the rent collectors.

At least 167,000 apartments have been removed from rent control by so-called Individual Apartment Improvements. Landlords will neglect a building, refusing to make necessary repairs. Then, they get state approval for a rent hike because the building needs repairs.

Building owners can also raise rents by 20 percent when a tenant leaves or is pushed out of a rent-controlled apartment. And when the rent rises to $2,775 per month, the unit can be taken completely out of rent control compliance.

The Kushner family is among the big landlords that use these laws to drive out rent regulated tenants. One of the family members is Jared Kushner, a son-in-law of Donald Trump.

Many groups and neighborhoods represented

The rally at Abyssinian Baptist Church was like a people’s congress of tenants. People had come from throughout New York City and surrounding communities as well. Speakers addressed listeners in English, Spanish and Chinese.

Among the groups represented were the Metropolitan Council on Housing; the New York State Tenants and Neighbors Coalition; Woodside on the Move; the MinKwon Center for Community Action; the North West Bronx Community and Clergy Coalition; the Riverside Edgecombe Neighborhood Association; the Morningside Heights Multicultural Tenant Organization; New York Communities for Change; St. Nick’s Alliance; and the West Side Neighborhood Alliance.

Tenants and their supporters have been betrayed over and over again by politicians in both New York City and the state capital in Albany. The Empire State’s politics are dominated by the banks and interconnected real estate interests.

But tenants have had enough! People are refusing to be pushed out of New York City. A mighty movement can sweep away every obstacle.

That’s what happened in Cuba and Venezuela. One of the first legislative acts of the Cuban Revolution was to limit rent and utility payment to no more than 10 percent of a family’s income.

The Bolivarian Revolution has built over two million homes for poor and working people in Venezuela. That’s another reason for all the Trumps and Kushners to try to overthrow the democratically elected Venezuelan president, Nicolás Maduro Moros.

People are planning to go to Albany on May 14 to confront the landlords and their stooges. Power to the tenants!