The revolutionary Bolivarian government of Venezuela has fought off a multipronged attack by the U.S. administration and today remains popular among millions of Venezuelans who have been lifted from poverty by Chavista policies.

The U.S.-anointed “interim President,” Juan Guaidó, is weakened: his top aide has been arrested, he has been banned from running for public office, and his parliamentary immunity has been done away with.

Guaidó was banned from running for public office for 15 years by Venezuela’s Constituent Assembly. The Constituent Assembly — in accordance with Venezuela’s Constitution — was created after U.S.-backed right-wing politicians took over the National Assembly. It represents those in Venezuela who had no access to political representation prior to the election of the late President Hugo Chávez.

Just days after the Constituent Assembly imposed the 15-year ban, Guaidó was also stripped of parliamentary immunity. This move could even presage his arrest and prosecution for his treasonous collaboration with U.S. imperialism.

Russia and China are delivering large shipments of medicine and other aid. In another major blow to the Trump administration, Russia has begun sending troops and military equipment to send a message to Washington that Moscow supports Venezuela’s sovereignty.

Two Russian air force planes, 100 special forces troops and — importantly — cybersecurity experts arrived in Caracas on March 23. Trump administration figures are fuming over this, and Trump himself told reporters in the Oval Office, “Russia has to get out!”

Imperialist economic sabotage has caused hardship, but in addition to aid from Russia, China and other allies, the International Red Cross will now begin delivering supplies as well — initially enough to help 650,000 people survive the effects of the cruel U.S. economic warfare.

The Red Cross did not support Guaidó’s failed attempt to embarrass the Maduro government by trying to force delivery of a paltry amount of aid through neighboring Colombia on Feb. 23, and then burning the trucks in order to blame Chavistas for the damage.

Hundreds of thousands of supporters of Nicolás Maduro turned out in Caracas on March 10 in an amazing show of defiance against Washington and the would-be coup makers. “I’m here to support President Maduro. … He is the constitutional president of our Bolivarian Republic of Venezuela,” said María Reyes, who was at the rally. 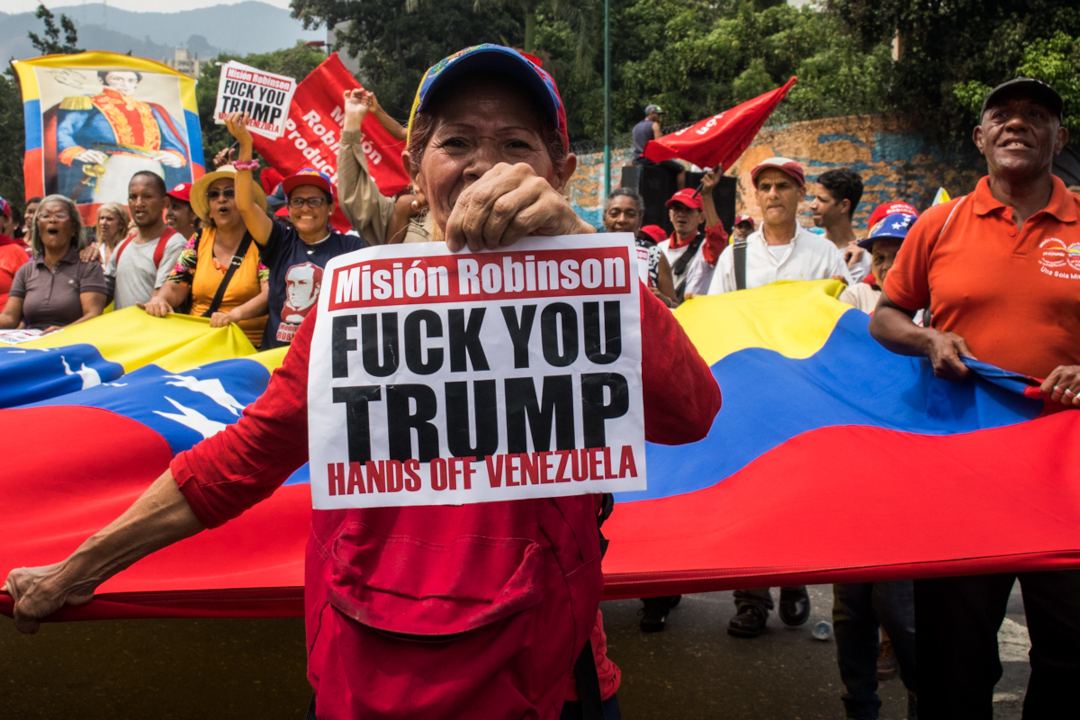 To be sure, the struggle isn’t over. Trump’s three henchmen — John Bolton, Elliot Abrams and Mike Pompeo — seem committed to accomplishing a full-blown counterrevolution in Venezuela.

These three war criminals, having failed in the war against the Syrian people, are determined to turn back all of the revolutionary gains of Chavismo and grab the largest known oil reserves in the world for U.S. oil companies and banks.

If you had to pick one contemporary figure that personifies the bloody crimes of U.S. imperialism in Latin America, it would have to be Trump’s special envoy to Venezuela, Elliot Abrams. He is responsible for hundreds of thousands of deaths in Nicaragua, El Salvador and Guatemala during the Ronald Reagan administration, and his bloody history was exposed by U.S. Representative Ilhan Omar in a January congressional hearing.

Secretary of State Mike Pompeo represents a current of imperialist hawks so right-wing and isolationist that they have been kept on the sidelines by the U.S. corporate establishment until recently.

National Security Advisor John Bolton, dredged up from the bloody Reagan-Bush era like Abrams, is the consummate CIA operative, infamous for his leading role in the Iran/Contra scandal — a U.S. intelligence agency plan to bolster their counterrevolutionary “contra” army in Nicaragua.

These three Trump administration criminals and countless others in Washington are frustrated over Russia’s commitment to continued military help for the Maduro government and the failures of the Guaidó faction to gain ground against the revolutionary masses of Venezuela. Perhaps they have tabled the idea of direct U.S. intervention or of pushing Brazil and Colombia to invade for now, but they will continue to plot.

Over the weekend of March 30-31, a new electrical outage hit over half of Venezuela. But by April 1, power had been restored to Caracas and some, but not all, other areas. The massive power outage three weeks earlier caused the deaths of at least 21 people.

Vice President Delcy Rodríguez pointed to the U.S.-backed opposition being the perpetrators of a criminal campaign of sabotage. U.S. intelligence agencies have the ability to sabotage the power grid of other countries, and it is widely believed that they are responsible.

After the major outage in mid-February, another power station was damaged by what turned out to be gunfire. President Maduro announced a power-rationing plan that includes limited, planned outages in order to conserve power, so that the country will be more prepared in the likely event of further sabotage.

The Chavista government has publicly honored electrical workers and engineers who have battled against the likely sabotage and found ways to quickly restore electricity.

Many corporate media outlets continue to refer to the situation in Venezuela as a “rivalry” between two presidents. But the leader of the Cuban Revolution had it right: “A revolution is a fight to the death between the past and the future.” All progressives must rally to the defense of the Venezuelan people.