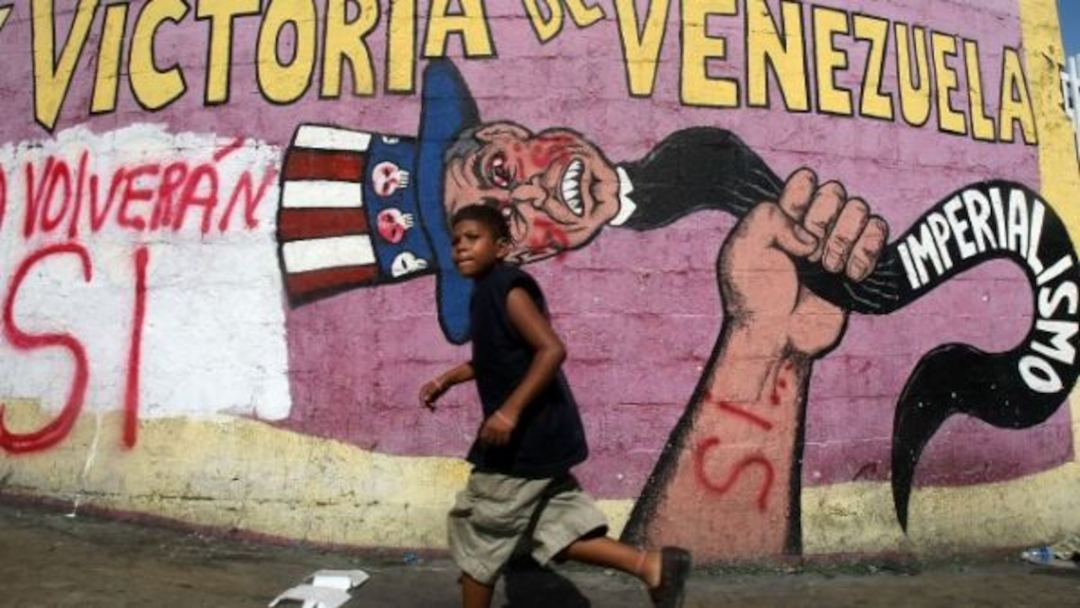 John Bolton doesn’t serve up any mush about “democracy ” or “human rights” in selling the U.S. war against Venezuela. Trump’s national security advisor told the Fox Business Network on Jan. 24 the real reason for the hostilities:

“It will make a big difference to the United States economically if we could have American oil companies really invest in and produce the oil capabilities in Venezuela.”

In other words, it’s all about oil profits.

Turning back the clock to Teddy Roosevelt and U.S. battleships blasting “restless natives,” Bolton told CNN’s Jake Tapper on March 3, “In this administration, we’re not afraid to use the phrase Monroe Doctrine.”

War hawk Bolton was referring to the colonial relic that was invoked to justify dozens of U.S. invasions of countries in the Americas. Instead of battleships, Bolton’s former boss Ronald Reagan sent two aircraft carriers to assault the 135-square-mile sized island of Granada.

The Monroe Doctrine is also a relic of slavery. It’s named for the fifth U.S. president, slave master James Monroe.

As Virginia governor, Monroe crushed a revolt of enslaved Africans in 1800. At least 26 Black people were hanged. Among them was the revolt’s leader, the blacksmith Gabriel Prosser, and his two brothers Solomon and Martin, who were executed on Oct. 10, 1800.

The Monroe Doctrine helped murder Haitian national hero Charlemagne Péralte in 1919 after U.S. Marines invaded Haiti and stole the country’s gold reserves. At Trump’s direction, the Bank of England has done the same to over a billion dollars of Venezuelan gold.

Marine Corps Sgt. Herman Hanneken wore blackface when he assassinated Péralte and was awarded the Medal of Honor for his crime. Hanneken was eventually promoted to brigadier general.

It’s a lie that the Monroe Doctrine was ever used to stop European powers from reoccupying their former colonies in the Western Hemisphere. Reagan’s defense secretary, Caspar Weinberger, was knighted by Queen Elizabeth for helping British Prime Minister Thatcher invade Argentina’s Islas Malvinas.

Back in 1935, another Marine Corps general—Smedley Butler—told the truth about the Monroe Doctrine:

“I spent 33 years and four months in active military service and during that period I spent most of my time as a high class muscle man for Big Business, for Wall Street and the bankers. In short, I was a racketeer, a gangster for capitalism. I helped make Mexico and especially Tampico safe for American oil interests in 1914. I helped make Haiti and Cuba a decent place for the National City Bank [now Citibank] to collect revenues in. I helped in the raping of half a dozen Central American republics for the benefit of Wall Street. I helped purify Nicaragua for the International Banking House of Brown Brothers in 1902-1912. I brought light to the Dominican Republic for the American sugar interests in 1916. I helped make Honduras right for the American fruit companies in 1903. In China in 1927 I helped see to it that Standard Oil went on its way unmolested. Looking back on it, I might have given Al Capone a few hints. The best he could do was to operate his racket in three districts. I operated on three continents.”

Butler was awarded two Medals of Honor. He wanted to return the first one, given in connection with the U.S. Navy shelling Veracruz. People fought back but hundreds of Mexicans were slaughtered in the occupation that started April 21,1914.

The day before — April 20, 1914 — over 20 people, including 11 children, were killed by the Colorado National Guard at a workers’ tent colony at the town of Ludlow. These National Guard mercenaries were breaking the strike of the United Mine Workers against Rockefeller-owned Colorado Fuel and Iron.

Among those murdered was strike leader, Louis Tikas, a Greek immigrant. Trump would have wanted to deport his corpse.

The Ludlow Massacre was a domestic version of the Monroe Doctrine. To paraphrase Karl Marx, U.S. labor will never be free when workers in Africa, Asia and Latin America continue to be exploited by U.S. imperialist capitalism.