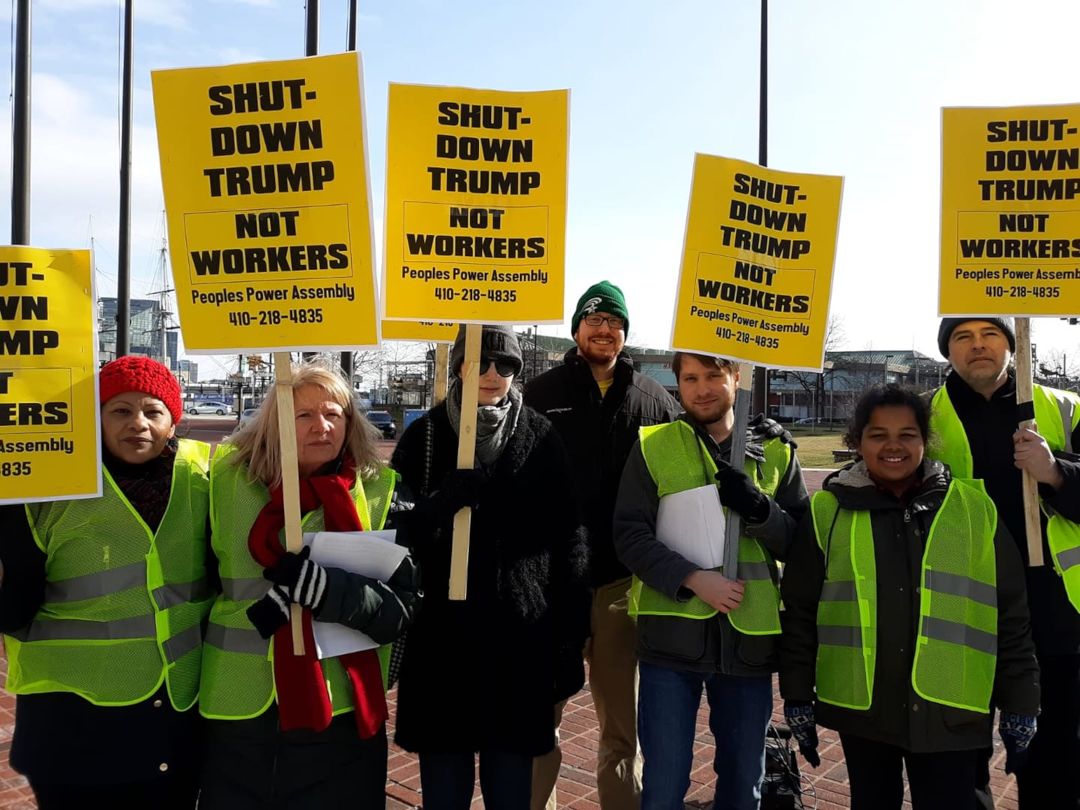 A whirlwind of activities encompassed the fallout from Donald Trump’s government shutdown, the U.S. coup attempt in Venezuela and solidarity with migrants at the U.S.-Mexico border.

The day started at McKeldin Square downtown, where the Peoples Power Assembly had put out a call to “Shut down Trump, not workers!” Just the night before, Trump and congressional Democrats had reached a temporary deal to fund government services and put furloughed federal workers back on the job — hours after a mass “sickout” by affected workers threatened to shut down major East Coast airports.

But a dozen activists turned out anyway, to leaflet and talk with people affected by the more than monthlong shutdown — and who might be again if a further agreement isn’t reached by mid-February. Trump has threatened to shut down services and jobs once more if Congress won’t fund his racist wall on the border with Mexico.

“We’ve heard from federal workers who are losing their apartments because of the shutdown,” explained PPA’s Sharon Black as she passed out flyers to passersby. “Others are in danger of having their utilities cut off in this freezing weather. So it’s important that we’re out here to talk to people, so we can provide them with resources and help organize to defend their rights.”

Baltimore, about an hour’s drive from Washington, D.C., is home to many federal workers and workers employed by government contractors affected by the shutdown, especially in the city’s Black community.

Following this outreach to the community, activists went to the Harriet Tubman Solidarity Center to warm up and get ready for more actions. The face of anti-slavery freedom fighter Tubman greets visitors from the front window.

The center is equipped for making signs and banners for protests, but easily converts into a welcoming meeting space. Beautiful and historic banners and protest placards line the walls, many sporting the image of Dr. Martin Luther King Jr. 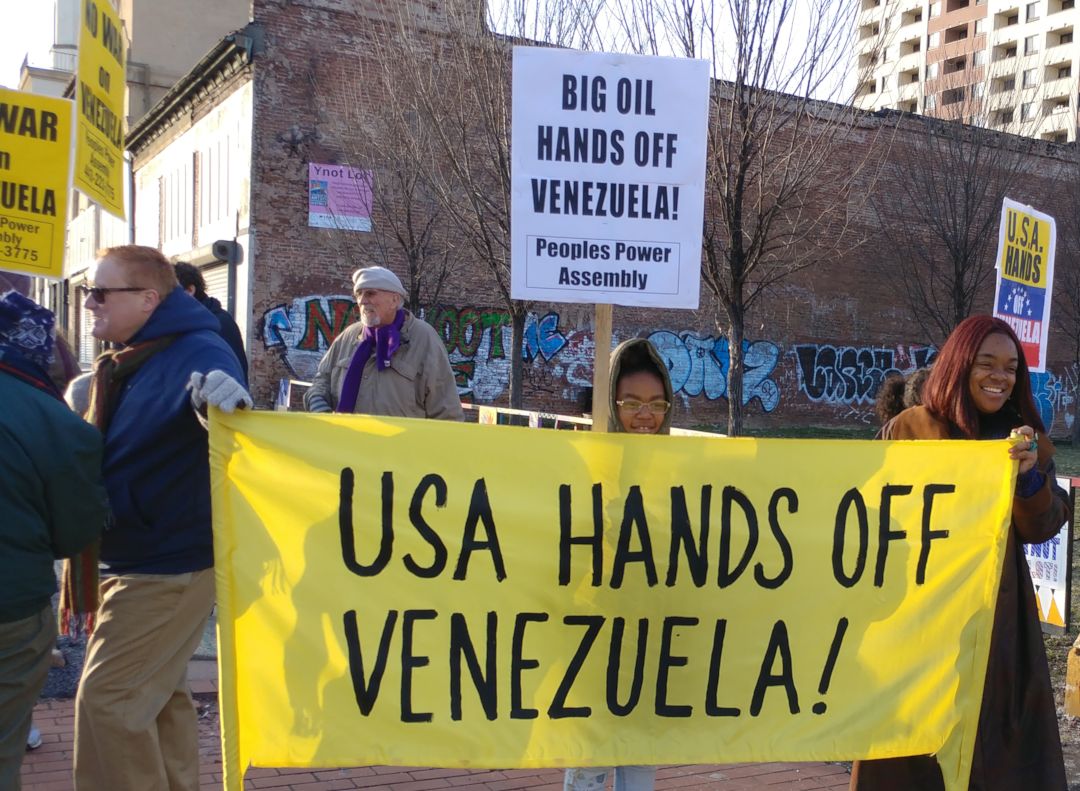 From the center, people carried signs, banners, leaflets and sound equipment to a nearby park at the corner of North Avenue and Charles Street in West Baltimore. Unfurled banners declared: “U.S. hands off Venezuela!” and “No war on Venezuela!”

The demonstration quickly grew, with more than 30 people joining in, representing the community and a variety of political organizations, including the PPA, Youth Against War & Racism, Struggle-La Lucha and the Communist Party of Maryland.

Many drivers honked their horns in solidarity as they passed through the busy intersection. Young people from the neighborhood stopped to take leaflets and listen to talks about the importance of defending the workers’ struggle and Bolivarian revolutionary process from Big Oil and the Pentagon.

Activists carried a historic banner from one of President Nicolás Maduro’s visits to the U.S., which declared him “The People’s President” and pictured Maduro and his predecessor, the late Hugo Chávez.

The crowd chanted, in Spanish and English, “Maduro, amigo, the people are with you! Baltimore is with you!” A speaker explained how desire for oil profits and for grabbing other Venezuelan resources was behind the latest round of U.S. attacks.

Despite the freezing temperature, the spirited protest continued even longer than expected, as people loudly voiced their solidarity with the Venezuelan people against U.S. imperialism.

Finally, as the sun set, many of those who had gathered in solidarity with Venezuela trekked back to the Harriet Tubman Solidarity Center for the day’s final event: a meeting in solidarity with the migrant/refugee caravans trapped at the U.S.-Mexico border.

The meeting area was filled with those who came from around the city and the region to hear the speakers. People talked and warmed themselves with homemade chili before the program, which was livestreamed.

PPA’s Sharon Black, who chaired the meeting, and Greg Butterfield, a correspondent for Struggle-La Lucha from New York, reported on their visit to the border in late November as part of a Los Angeles solidarity caravan bringing aid to refugees in Tijuana. They spoke about the importance of building working-class solidarity with those fleeing U.S.-imposed political and economic violence in Central America, and of linking the migrant struggle with those of striking teachers and furloughed federal workers.

Lucy Pagoada-Quesada gave the featured talk. She represents Department 19, the North American branch of the liberation struggle in Honduras, and the Libre Party. She explained the impact of the 2009 military coup against progressive President Manuel Zelaya, which created the conditions that have led many thousands to leave their country and demand asylum in the U.S. — whose government planned, funded and supported the coup.

“These are political people,” Pagoada-Quesada explained. “They know who is responsible for the tragedy in our country and they are demanding the U.S. take responsibility.”

Trump is now trying to carry out the same kind of attack in Venezuela, said Pagoada-Quesada.

A statement from D19 distributed at the meeting said: “The violence in Honduras has occurred under the auspices of the governments of Barack Obama and Hillary Clinton and of the supremacist and fascist regime of Donald Trump and his accomplices. That crime against our democracy created the conditions of the massive exodus of Hondurans to the United States and that has reached its climax in recent years, with the massive displacement of thousands of entire families trying to cross the Mexican border in search of refuge and asylum. … In the exodus of thousands of displaced people in the caravans, more than 80 percent are from Honduras.”

In the discussion that followed, several people commented on the significance of the day of action and the need to continue organizing and uniting the struggles of poor and working people from Baltimore to Honduras and beyond.