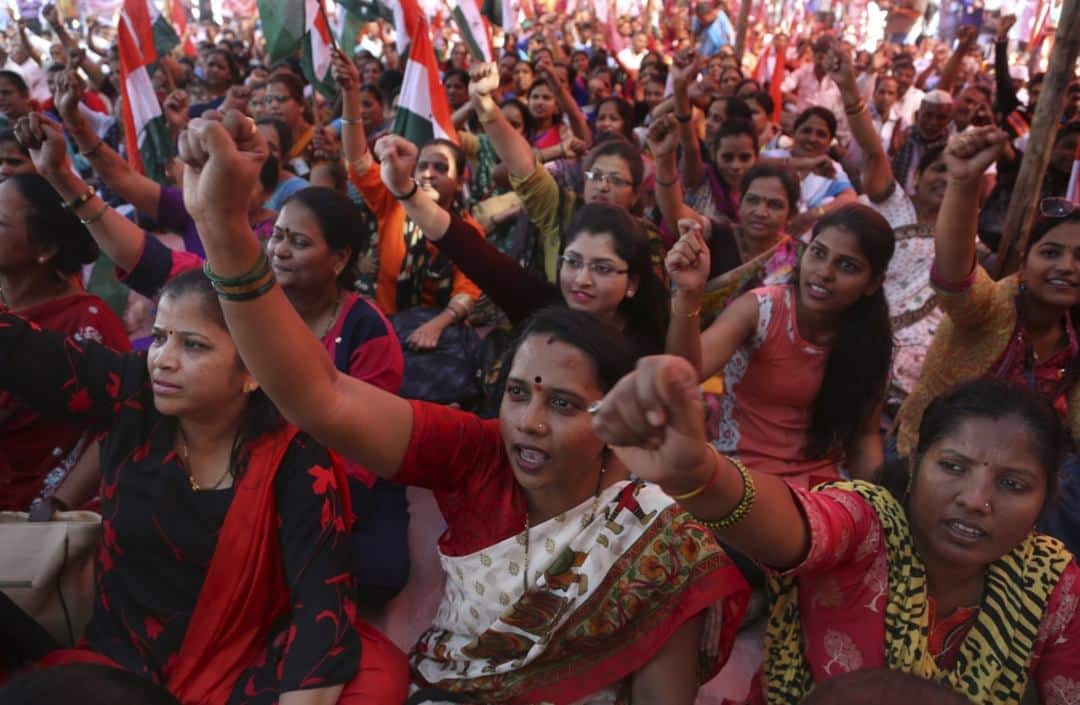 On Jan. 8 and 9, Indian workers, 200 million strong, carried out a general strike that may be the largest in labor history.

The fury of the strike took many forms, without a unified agenda. In rural areas, protests by agricultural workers and small farmers were organized to shut down rail and road traffic. Transport workers’ unions supported the strike.

Laborers, factory workers, government and bank employees led protest marches. In large cities, like the capital New Delhi, all industries and factories were shut down.

Students supported the strike and, in some states, schools and colleges declared holidays. In many states, especially those without repressive labor laws, hospitals, post offices and banks were closed.

This national strike, the third since Modi took office, has strengthened class solidarity, crushing the efforts to divide people along religious lines, Hindu against Muslim.

Plans to organize the strike were initiated by the country’s largest unions last September when Modi proposed the 2018 Trade Unions Amendment bill.

Modi’s proposed legislation would give the the state and central government sole authority to recognize labor unions. It would deny the unions their independence from government and the ability of labor to speak for itself.

Modi prepared the legislation in secret talks, abandoning the long established practice of negotiations between the bosses, the government and unions representing the workers.

The CTUOs had 12 demands for the national strike, some of which targeted Modi’s proposal to alter the existing laws that protect labor rights and jobs, proposals which aim to make conditions “easier” for businesses. The trade unions have also called for the protection of rights of the large population of informal workers and to immediately address the agrarian crisis that has been plaguing the nation.

Other important demands of the labor strike ranged from raising the monthly minimum wage to Rs. 18,000 ($250) to protecting the public sector from rising food prices.

A significant demand, meant to protect India from imperialist exploitation, centered on preventing foreign or private investment in key public sector areas, including defense manufacturing, railways and other public transport, and banking and finance.

Numbering over 520 million, only a small portion of India’s workers are unionized. Most union members work in the public sector.

Roughly 62 percent of the employed are daily wage workers. Their sources of income are seasonal and very vulnerable to market fluctuations.

According to a January 8 article by Peoples Dispatch: “Those dispossessed by the agrarian crisis that has been plaguing rural India since the mid-1990s have taken to migrating to urban centers in search of livelihoods. According to the last census, conducted in 2011, more than 450 million Indians were migrants to other regions, usually to urban centers. Most of them migrate to work only for short periods of time, not only making any meaningful organizing of this group extremely difficult but also making them very vulnerable to exploitation.”

Despite having one of the world’s largest economies, India is also among those having the lowest average wages. A new study by the Centre for Monitoring Indian Economy (CMIE) estimates that India lost almost 11 million jobs in 2018, making it the worst year for employment in decades.