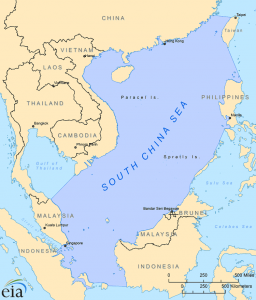 U.S. military exercises have come within 400 miles of China’s mainland in the South China Sea (called the South Sea in China and the East Sea in Vietnam). The provocations have increased year after year since former President Obama’s imperialist “pivot” towards Asia.

Imagine if China had military exercises right on the doorstep of the U.S. mainland in either the Pacific or Atlantic oceans – close enough for a passenger cruise ship to come into contact with the exercises. And not just your typical military exercises, but ones that were in preparation for a coastal invasion. Imagine if China did this with three other countries, some of whom were promised nuclear weapons.

It’s hard to imagine such a scenario targeting the U.S. because it doesn’t exist. But for the people of China, the U.S. is very much at the doorstep on a daily basis. And on Nov. 29, the situation escalated.

According to a report in the Nov. 30 China Daily, a U.S. guided-missile cruiser illegally entered Chinese waters near the Nansha Islands on the morning of Nov. 29, a spokesperson from the People’s Liberation Army said.

“Without the approval of the Chinese government, the guided-missile cruiser USS Chancellorsville illegally entered the waters near the islands and reefs of China’s Nansha Islands on Tuesday,” Senior Colonel Tian Junli, spokesman for the PLA Southern Theater Command, said in a statement.

“The theater command has organized naval and air forces to track, monitor and warn it off,” he said.

The colonel added that the warship’s move, which seriously infringed on China’s sovereignty and security, is more “hard proof “that the United States is seeking maritime hegemony and militarizing the South China Sea.

According to the South China Sea Data Initiative, a project of Emory University and the University of California, in 2017, the USS Dewey warship held a “maneuvering drill” less than 400 miles from the mainland of China. In that same year, the USS Stethem came within 200 miles of China’s southernmost province, Hainan Island, with a population of about 10 million people.

But Washington arrogantly says China is the guilty party threatening the U.S.

The fact is that, like the strategy to provoke Russia exposed three years ago in the Rand Corporation Plan, this plan to target and provoke China is exposed in the 2022 National Defense Strategy document from the U.S. Secretary of State and blessed by President Joe Biden in its introduction.

The plan was written before this latest provocation in the South China Sea and reveals that these altercations are pre-planned to solicit one result – war with China.

The article quotes Hu Bo, director of the think-tank, who said the U.S. military has maintained a fairly strong presence near China since 1949, but in recent years it has considerably ramped up its operations in the region and made them more public.

As the National Defense Strategy outlines, these provocations will be carried out with the assistance of other collaborators of U.S. imperialism.

“In August 2021, the U.S., along with Australia, Britain and Japan, carried out ‘Large Scale Exercise 21,’ its largest naval exercise in 40 years, involving around 25,000 military personnel operating across 17 time zones from Europe to Asia,” says China Daily.

Hu warned that Washington’s reckless escalation in military activities severely stretched personnel and machinery, leading to a greater risk of accidents and friction in the South China Sea.

For example, the USS Connecticut nuclear submarine recently collided with an uncharted seamount (underwater mountain) in the South China Sea last year, and an F-35C fighter jet crashed on an aircraft carrier operating in the region in January.

“In an era of peace, if one country maintains such a powerful military presence close to another country, it is hard for the former to convince people that it is doing it for peaceful purposes,” Hu said.

What is the U.S. economic interest in the South China Sea?

According to a 2018 CNBC report, the South China Sea has $5.3 trillion worth of trade going through its waters each year, or one-third of all global maritime trade.

It’s been estimated that between 11 billion and 125 billion barrels of oil and between 190 trillion and 500 trillion cubic feet of natural gas lies beneath.

But for the U.S., grabbing control has become even more of an uphill battle since it has no NATO forces in the region. Many of the countries it would like to conspire within these provocations toward war have growing beneficial trade relations with China. This includes South Korea.

Moon Chung-in, chairman of the Sejong Institute in the Republic of Korea, quoted by China Daily, mentioned that the U.S. has been implementing its “Indo-Pacific” strategy, a strategy to isolate China economically, but this would hurt South Korea.

“China is our biggest trade partner so we cannot join the U.S. in decoupling with China, but meanwhile, we share similar values with the U.S.,” Moon said. “… Thus, we must return to the principles of multilateralism that Beijing has proposed.”

China’s economic and cultural ties have increased with the Association of Southeast Asian Nations (ASEAN), which was formed to create a more powerful force for maintaining the sovereignty and independence of its member nations. It consists of Brunei Darussalam, Cambodia, Indonesia, Lao People’s Democratic Republic, Malaysia, Myanmar, Philippines, Singapore, Thailand, and Vietnam.

According to Shi Zhongjun, secretary-general of the ASEAN-China Centre: “… two-way trade has grown by 85 times from 1991 to 2021, maintaining a robust growth momentum … bilateral trade increased by 15.8% year-on-year in the first ten months of this year to 5.26 trillion yuan ($737.6 billion), accounting for 15.2% of China’s foreign trade. And China has become the second-largest investor in ASEAN, with its investment in 2021 touching $14 billion, up 96% year-on-year.

“The two sides have also maintained frequent people-to-people exchanges … with mutual visits exceeding 65 million and the total number of flights between the two sides being more than 4,500 a week in 2019. …

“Chinese universities are offering majors in the official languages of all the ASEAN member states, and the two-way flow of students was more than 200,000 a year before the pandemic broke out.”

The reckless strategy laid out in the U.S. National Defense Strategy has little hope of unifying an anti-China conspiracy amongst the ASEAN nations, and without that, the plan will ultimately fail.

What the anti-war movement must do now is hasten that failure. We must build the understanding of who the real provokers of war are instead of allowing the vilification of Russia and China to distract us from stopping all manifestations of U.S. imperialist war strategies.