On Dec. 12, the U.S. federal court in Miami began hearings in the case of Venezuelan Ambassador Alex Saab, who has been falsely arrested and is presently imprisoned in a Miami federal penitentiary on trumped-up charges of money laundering.

His attorneys called on District Judge Robert Scola to dismiss the charge as Saab’s status as a diplomat gives him immunity. Alex Saab was on a diplomatic mission from Venezuela to Iran to buy fuel and humanitarian supplies when he was seized as his plane refueled in the Cape Verde islands.

A decision is expected to be rendered by Dec. 20.

Who is Alex Saab?

The Venezuelan people consider Alex Saab a national hero. Saab helped procure and arrange shipments of desperately needed food, medicine, and supplies to Venezuela’s population, who have suffered immensely because of U.S. sanctions that block the shipment of crucial supplies.

U.S. sanctions have not only caused deep hardship from lack of food, fuel and medicine; they have led to death, especially for children and the elderly. In the film “Alex Saab, a Kidnapped Diplomat,” Ana Araujo, from Caribe La Guaira, Venezuela, describes the death of three of her five children, deaths that could have been prevented if there were no U.S. sanctions. The most recent death resulted from not getting diabetic medicine.

Dr. Alfred de Zayas, who served as an independent expert for the United Nations Human Rights Council, estimates 100,000 Venezuelans have died as a result of the sanctions implemented by the U.S. government. 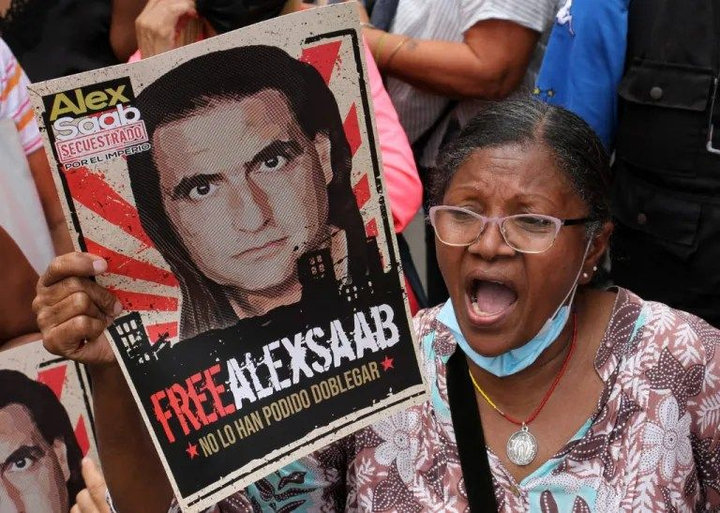 You can see Alex Saab’s picture painted on murals and posters on street corners calling for his release. Massive protests have brought out workers and poor people from Venezuela’s communities to demand his release.

To his family, Alex Saab is a loving father of five children and husband of Camilla Fabria Saab, who has also been the target of official U.S. harassment and sanctions. Alex Saab’s two youngest children, three years old and five months old at the time of his arrest, have not seen their father for over two years.

In the U.S., he is mostly unknown

The State Department, which orchestrated Saab’s kidnapping, and the paid corporate media are not publicizing the U.S. kidnapping of the Venezuelan diplomat. So it is no surprise that few inside the U.S. are familiar with his case. What has been reported has been a shameful gaggle of lies.

Ambassador Saab was illegally seized and arrested for allegedly violating the Vienna Convention when his plane was refueling in Cape Verde. While jailed, Saab was tortured by English-speaking captors who demanded that he denounce Venezuela’s President Nicolas Maduro. He was denied medical treatment for cancer, beaten and cut on his ankles and wrists.

This is despite the Economic Community of West African States, the African Bar Association, and the United Nations Human Rights Committee speaking out against his false imprisonment and plans to extradite him to the United States.

The appeals process in Cape Verde had not been completed, nor were his lawyers or family informed, when Ambassador Saab was shuttled out of the Cape Verde jail on an aircraft to the U.S. Suspiciously, this took place the day before the election in Cape Verde. The winning party had announced they planned to release him.

While he remained jailed in Cape Verde, both of Saab’s parents, who were immigrants from Palestine and Lebanon, died due to the COVID pandemic.

Why and how can such cruel and illegal actions take place?

It is through sheer might and arrogance that the State Department has scuttled international law and has used covert and overt military violence. The mentality of U.S. imperialism is “no one can stop us since we have the guns and economic might.”

The same flagrant disregard for world opinion and law has fueled the U.S. blockade of Cuba. For the last 30 years, the member nations of the U.N. have voted to end the criminal blockade of Cuba. Only two countries, the United States and Israel, continue to vote no.

Similarly, Cuba, which has neither threatened nor perpetuated violence, continues to be classified by the U.S. as a terrorist country.

Despite the military might of U.S. imperialism, the united action of the world’s people, particularly Cuba, ultimately freed these five heroes who were falsely accused of being spies.

Well-documented facts confirm that the five Cuban heroes were on a mission to stop terrorist attacks on Cuba, not spy on the United States. Their mission followed the horrific bombings orchestrated by Posada Carriles, a former CIA operative. This included the infamous bombing of Cubana de Aviacion Flight 455, which was in flight from Barbados to Cuba. This was the first bombing of a civilian airplane in flight in the Western hemisphere.

All 73 people on board perished, including the entire Cuban Olympic fencing team who had just won all the gold medals in the Central American and Caribbean Championship Games. Most were teenagers. The Cuban pilot averted crashing into the beach, saving the lives of countless tourists.

Cuba’s people, led by comandante Fidel Castro, made it a priority to gain the release of the Cuban 5. Millions of people in Cuba and worldwide protested and joined a massive campaign. What seemed impossible happened when the last of the Cuban 5 were released in 2014 and returned to Cuba.

It proved that what seemed impossible was possible.

People’s actions can change history, and we can free Alex Saab. An important step is to break the information blockade. You can watch the film “Alex Saab, a Kidnapped Diplomat” on YouTube for a detailed explanation of his case. View it and make sure your friends and family see it too.