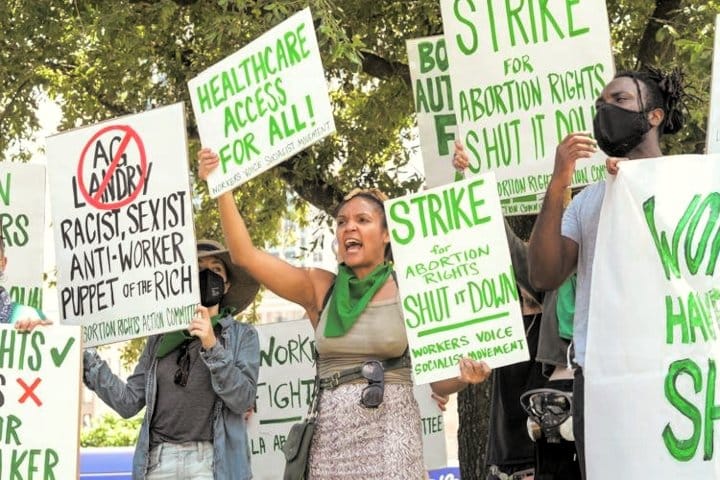 Women’s Lives Are at Stake

Call for a National Week of Civil Disobedience to Restore Abortion Rights, September 18-24

No to Militarism and War

Fight the Right! No Business as Usual!

All Cities, All Organizations, United

It took a mass, militant movement coast to coast, north and south, to win Roe v. Wade – not politicians or the conscience of Supreme Court “justices.” We have had to fight for abortion rights every day of the almost 50 years since—not only against the openly extreme right wing but against the Democratic Party, which has supported anti-abortion judges and laws, including the hideous Hyde Amendment that took away the right of poorer women to get abortions.

Emboldened by the overturning of Roe, the right wing is pushing forward. They are seeking a national anti-abortion law and a ban on the abortion pill. They are escalating terroristic violence everywhere—including in “abortion-protected states.” Attacks on protesters by fascists and police and bombings of abortion clinics across the country have not stopped protesters from taking to the streets. We will not let this stand.

We are not going to be content with politely lobbying Congress for a law it won’t pass, Biden’s toothless executive order, or a handful of cities making prosecution a “low priority” while the clinics stay closed and the state police take up prosecution of those who get abortions. Supporting and funding the courageous abortion underground is important, but many will be unable to travel or access their support. It is time we joined together, arm in arm, united against these assaults on our rights. They need to know that we are serious. We need to carry out mass civil disobedience across the country.

We stand against this attempt to control all women and child-bearing people of all genders, especially workers and other poor people and communities of color. We will not let them divide us. Our enemy is the super-rich and their government lackeys who are trying to strip away our rights. We fight not only for the restoration of abortion rights, but for everything necessary to be able to choose to raise children, including free childcare, parental leave and more. We fight for unions and workers’ rights, LGBTQ rights, environmental protections and universal healthcare, and we demand an end to racist terror and wars for profit. Their profits are not our concern—our survival is.

It is time to say NO to business as usual. Let’s unite to get every city, group and individual to shut it down. Let’s follow the example of the women in Ireland, Spain, Mexico, Poland and Argentina—we too can strike. We need to build up a united national fightback so we can move towards a women’s strike — even for a day — and withhold our labor. The labor of women workers is super-exploited, especially women of color, but our labor keeps everything running. We are powerful if we assert our collective power. We can and need to hit back forcefully.

We ask that you or your organization endorse this call for a National Week of Civil Disobedience to Restore Abortion Rights.