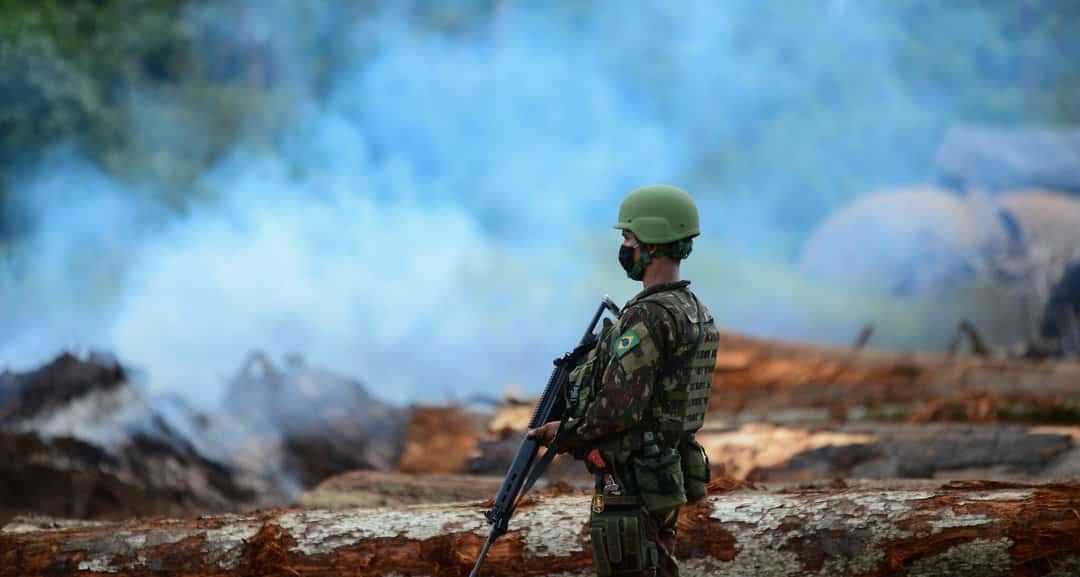 In the Brazilian Amazon, as deforestation reaches record levels and rivers are increasingly polluted, the illegal gold mining contributing to these problems continues largely unabated. The response of the government has been to increase military action to curb environmental crimes in Brazil. Far from achieving this purpose, however, the military intervention has only led to tragedies in the region, directly or indirectly.

A source from the Brazilian Amazon wrote to us at Revista Opera two years ago to warn us about something strange that was going on there: illegally mined gold was being sold at the same price as legally mined gold. “If the nugget is a big one,” said the source, “they give the miner extra [money].” There was no investigation based on this information since it would have required great resources and risks, neither of which we could afford. It was just another fascinating story that was buried in the green hell (Inferno Verde) or El Dorado—terms often used to describe the immensity of the Amazon rainforest.

by the Federal University of Minas Gerais (UFMG) in partnership with the Brazilian Federal Public Ministry (MPF) showed that in two years—2019 and 2020—28 percent of all gold that was both produced by and sold in Brazil appeared to have been mined illegally. Perhaps such a large influx of gold for some exceptional reason had an effect on the price paid out for mining it at a given time, or perhaps the information provided was fabricated by the source, we thought.

further stated that of the gold produced in the Amazon, 44 percent was found to be “irregular” or illegal, revealing how the activity continued unchecked in the region.

The Amazon has been a multifaceted obsession of Brazil’s military for some time now. During the military dictatorship, which began in 1964, the motto regarding the policy to be followed in the Amazon was

“integrate not to surrender.” Later on, the motto conformed to the view that the forest was a site for a possible insurrection. In the ’80s and ’90s, Brazil’s generals would focus their attention on the incursion of Colombian left-wing guerrillas and on the trafficking of drugs and weapons. For them, the integration of the Amazon was a part of what the country’s military institutes now call

Media attention has focused on deforestation during the tenure of the government under Brazilian President Jair Bolsonaro. Despite the press coverage of the dark skies that were witnessed by Brazil’s major cities during the daytime in August 2019, as the smoke from the wildfires enveloped the cities, revealing the extent of deforestation in the Amazon, one fact remained hidden: the militarization of the Amazon.

During Bolsonaro’s rule, three military Law and Order Assurance Operations (GLOs) for reducing deforestation in the Amazon have been enacted: Operation Verde Brasil, which ran from August to October 2019; Operation Verde Brasil 2, between May 2020 and April 2021; and Operation Samaúma, between June and August 2021. The decrees of the operations provided Brazil’s Armed Forces with powers to take “preventive and repressive actions against environmental crimes,” and for “surveying and fighting fires.” In total, out of the 41 months that have elapsed since Bolsonaro’s government came to power, the Amazon has been under military control for almost 17 of them.

In addition, in February 2020, the National Council of the Legal Amazon was also reestablished, with its presidency being transferred from the Ministry of the Environment to the vice presidency. The council is now chaired by Army General and Brazilian Vice President Hamilton Mourão and is composed of 16 ministries (seven of which were being directed by army officials at the time the decree established the council). The general purpose of the council is to coordinate and integrate the action of the ministries on the issues related to the Amazon, “strengthen the state’s presence in the Legal Amazon” and “coordinate actions for the prevention, inspection and repression of illicit acts.” In addition, the council is responsible for establishing special subcommittees and inviting “specialists and representatives of public or private, national or international bodies or entities to participate in the meetings.”

Despite this mandate of the council, governors, representatives of the Brazilian Institute of Environment and Renewable Natural Resources (Ibama), the National Indian Foundation (Funai)—two governmental organizations working for the protection of the environment and the traditional populations of the Amazon—Indigenous peoples, and traditional communities weren’t invited to be part of it, and 19 military officials were appointed to the thematic committees of the body—whose composition is decided by vice president Mourão—in addition to four delegates from Brazil’s Federal Police.

An article by journalist Marta Salomon in Piauí magazine in October 2020 stated how there was a “Military Buildup With Money From the Amazon” during Operation Verde Brasil 2: renovations in barracks that included painting walls, replacing floors, doors, coatings and roofs were part of the operating expenses—in addition to the secret expenses in the contracts of the Army Intelligence Center with private companies. As spending on preservation of the forest by the Ministry of the Environment fell, investments in GLO military missions in the Amazon grew by 178 percent: in 2021, 37 percent of the total spending to stop deforestation was allocated to military actions.

Another government measure involving the military (or military measure involving the government) was the “intervention” in Funai, Brazil’s official agency that is responsible for protecting and promoting Indigenous rights. An article by Daniel Giovanaz in February 2021 revealed that “[o]f the 24 regional coordinations of the National Indian Foundation (Funai) in the Legal Amazon, 14 [were] led by the military.” One of these coordinators was Jussielson Golçalves Silva, an inactive navy soldier arrested in March this year for brokering the leasing of Indigenous lands to cattle ranchers in Ribeirão Cascalheira, Mato Grosso. Another article by Marta Salomon in October 2021 mentioned the case of Army Captain Raimundo Pereira dos Santos Neto, regional coordinator of Funai in Pará state, who had sent a letter to the organization informing them that a “collaborator,” Antônio Júlio Martins de Oliveira, had built a shed on the banks of the Iriri River under the pretext of serving the Kayapó Indigenous people of the region. The collaborator was an illegal miner, and the Funai shed was being used for his illegal activities, according to Salomon’s article.

As reported before, the three GLO operations that constituted the direct military intervention over the Amazon for a year and a half cost R$550 million—almost six times the budget allocated to Ibama for environmental inspection, licensing and biodiversity management in 2020—and failed to curb deforestation in the Amazon, according to Folha de S. Paulo. Brazil’s government said that the operations “attest to intransigence in the defense of our territory.” Vice President General Mourão, president of the Amazon Council, declared that the results of Operation Samaúma were “extremely positive,” despite data showing that during the GLO operations, deforestation continued to increase. In April this year, the vice president said that the data on deforestation in the Amazon rainforest for the month—when military operations were no longer active—were “terrible, horrible.” This raises questions about the contradictions in the statements made by Mourão during and after the GLO operations and the end-results of the military intervention in the Amazon; with the situation going from “extremely positive” in August 2021 during Operation Samaúma to “terrible, horrible” a few months later, once the operation ended.

The killings of indigenist Bruno Pereira and English journalist Dom Phillips, who disappeared on June 5 in Vale do Javari, Amazonas state, certainly has nothing to do, directly, with the military intervention in the Amazon, despite the delay in beginning the search operation by the armed forces and the scandal over the notes that the Amazônia Military Command (CMA) issued, saying it was “awaiting command from the upper echelons.” Indirectly, however, the title of an article written by Phillips in 2018 explains the role played by the military intervention in their killings clearly: “Tribes in Deep Water: Gold, Guns and the Amazon’s Last Frontier.”

This article was produced by Globetrotter in partnership with Revista Opera. Pedro Marin is the editor-in-chief and founder of Revista Opera. Previously, he was a correspondent in Venezuela for Revista Opera and a columnist and international correspondent in Brazil for a German publication. He is the author of Golpe é Guerra—teses para enterrar 2016, on the impeachment of Brazil’s President Dilma Rousseff, and coauthor of Carta no Coturno—A volta do Partido Fardado no Brasil, on the role of the military in Brazilian politics.