As many as 60,000 people marched in Washington, while thousands demonstrated in San Francisco.

Fifty years ago much of Africa was still under white minority rule. Richard Nixon and Henry Kissinger worked overtime to keep Black people in South Africa and Namibia in chains under apartheid.

The white settler “Rhodesia” regime occupying Zimbabwe was given a life line by the segregationist Strom Thurmond and his fellow U.S. senators. They voted to allow chrome to be imported from “Rhodesia”―in violation of United Nations sanctions―to retaliate against African countries that voted to admit the People’s Republic of China to the U.N.

Africans had picked up the gun and were waging guerrilla war against Portuguese colonial rule in Angola, Mozambique and Guinea-Bissau. 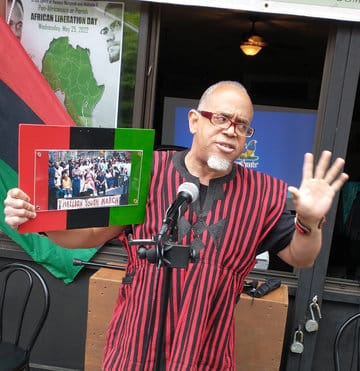 Speaking to the people

Roger Wareham, a member of the December 12th International Secretariat and a human rights attorney fighting for reparations, chaired the event.

Starting off the rally were drummers, two of whom were from Côte d’Ivoire. A large banner proclaimed “Pan-Africanism Rising!” Of the 13 freedom fighters whose photos were featured on it, six had been assassinated.

A recording was played of the Honorable Marcus Garvey speaking. The Black leader and immigrant who led millions was framed, imprisoned and then deported to Jamaica by the U.S. government.

A wonderful video was shown of the African Liberation Day marches in 1972. It was produced by Roy Campanella Jr., son of the legendary baseball catcher for the Baltimore/Washington Elite Giants as well as for the Brooklyn Dodgers.

The historian Walter Rodney, author of the classic “How Europe Underdeveloped Africa,” was shown speaking in San Francisco. Rodney was assassinated in 1980, a rubout that had CIA fingerprints.

The rally’s first speaker was D12 member Abdul Haqq, who gave a fiery talk about the need to fight.

Other speakers attacked Black elected officials who are being used in the anti-Russia crusade. Among them is representative Gregory Meeks from Queens, chair of the House Foreign Affairs Committee.

There was also sad news to report. Former political prisoner James Haskins announced that his friend Thomas “Blood” McCleary, who had been a member of SNCC, the Black Panther Party and Black Liberation Army, had passed. ¡Presente!

This writer for Struggle-La Lucha newspaper spoke of how African liberation fighters also brought freedom to Portuguese workers, who had lived for decades under a fascist regime. 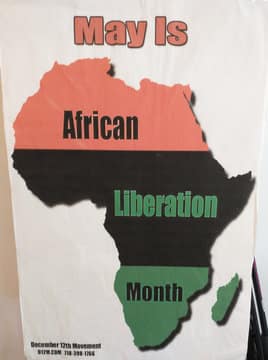 Zayid Muhammad of the Malcolm X Commemoration Committee reminded people how in 1998 former Mayor Rudy Giuliani had police helicopters attack the Million Youth March in Harlem. Zayid Muhammad was given a plaque to honor his longtime work.

Frederick Douglass declared that “without struggle, there is no progress.” Brooklyn’s African Liberation Day rally points the way forward.