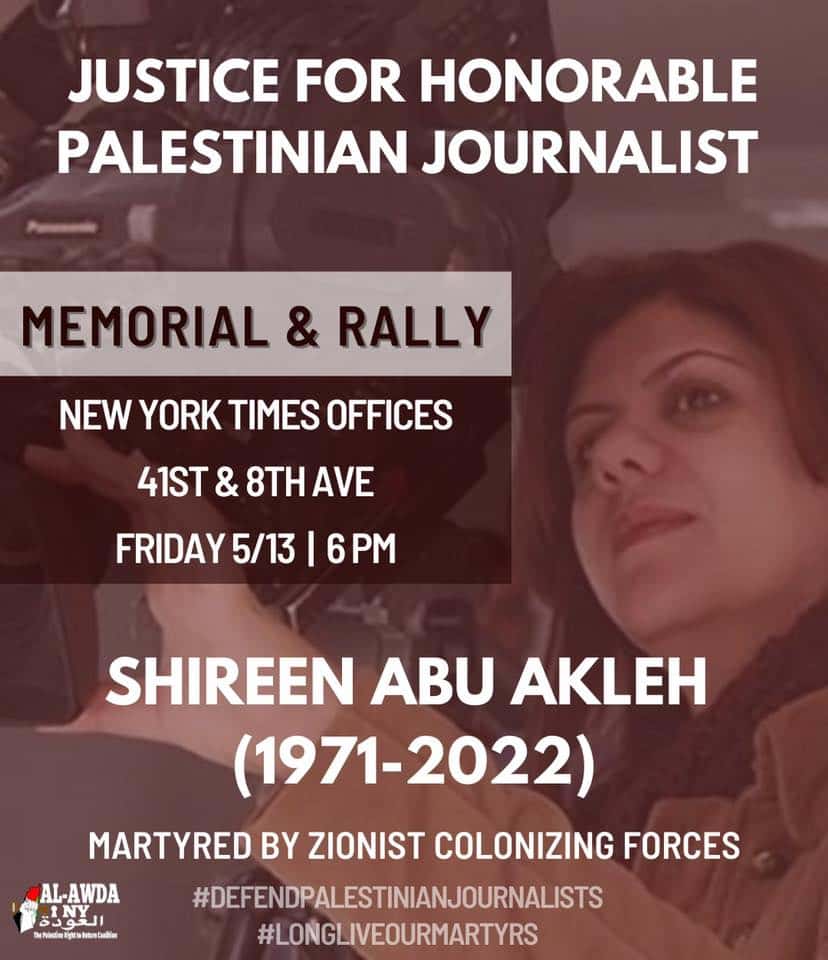 Emergency Rally and Memorial at the New York Times office on Friday, the day of Shireen’s funeral.
Location: 41st & 8th Ave, New York, NY
Allah Yerhamha! Long Live Our Martyrs!
We honor Shireen Abu Akleh’s fearless reporting in support of the Palestinian struggle. Shireen dedicated her life and was martyred while exposing zionist war crimes in the Jenin camp. Shireen, a Palestinian reporter at Al Jazeera, was targeted solely for consistently bringing israeli violence committed against Palestinian people to light. We know that the zionist occupation silence anyone who resists and exposes with impunity and utmost violence. In May 2021, the zionist entity bombed and destroyed a building in Gaza which housed international media outlets including Al Jazeera.
Meanwhile imperialist mainstream media outlets like the NYT, who have nothing to lose, refuse to even acknowledge the zionist occupation’s war crimes in murdering her and countless Palestinian martyrs. We know that it is the Palestinian masses, freedom fighters, workers, and journalists like Shireen who will free Palestine. The Palestinian masses, not mainstream outlets, are the ones who publicized zionist crimes last May and they continue to do so. We consider NYT and other western mainstream media outlets as illegitimate and they are not the arbiters of truth. Still, we hold mainstream press such as the NYT accountable for their zionist and imperialist reporting.
Join us we demand that the US and all states complicit in enabling the zionist entity immediately cease all financial, political, and military support to the zionist regime, and that the US government and all other states which have aided and abetted zionist crimes be held accountable.
We also call upon all media outlets to boycott all “israeli” press and sources and we demand that all outlets and press immediately stop giving cover, using the passive voice, or erasing zionist colonialism as the perpetrator of abuse, torture, murder, and raids on Palestinians.
#FreePalestine #DefendPalestine #ShireenAbuAkleh #Jenin #SaveSheikhJarrah #SaveSilwan #defendpalestinianjournalists #longliveourmartyrs
Join the Struggle-La Lucha Telegram channel