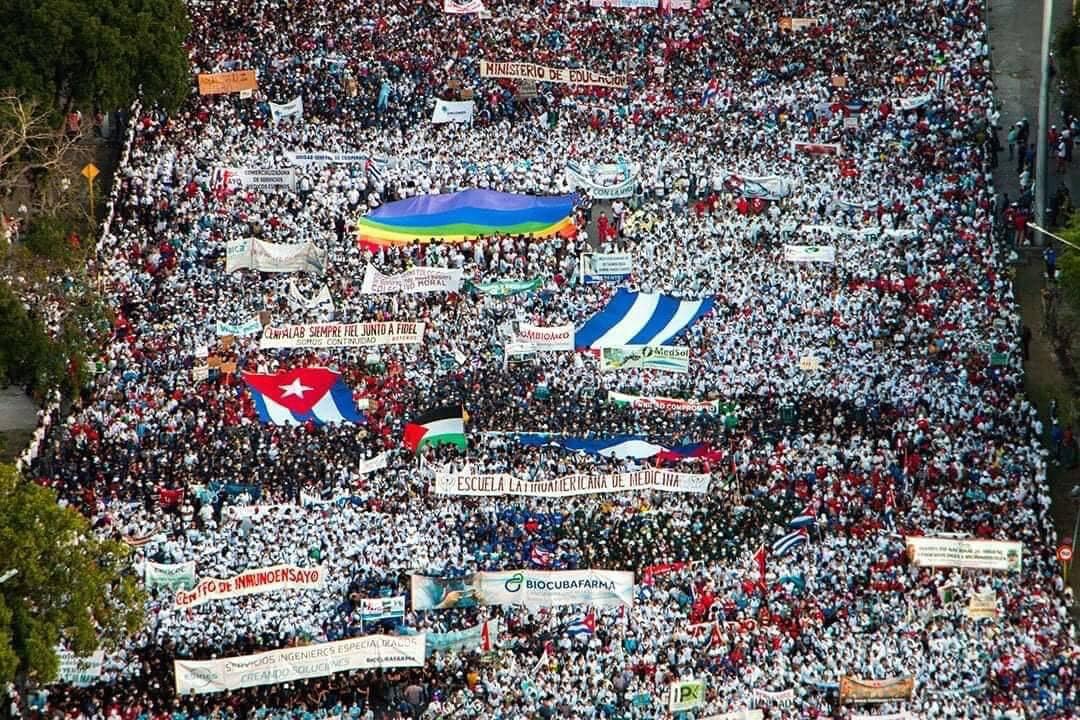 Havana’s Revolution Square looked beautiful this Sunday, as it had not been for three years. With the first morning light, thousands of Havanans, Cubans from all over our geography, and friends from other latitudes paraded as one in front of the giant bust of José Martí. All carried Cuban flags of all sizes, signs that read “Cuba Lives and Works,” “Yes, we can,” or showed images of Fidel, Raúl, and President Miguel Díaz-Canel.

Cuba missed the joy and creativity with which it marks International Workers’ Day. At 6 a.m. local time, the crowd looked like a sea of little heads from the 15th floor of a Havana building near the Plaza.

May Day is for Cubans as Fidel Castro described 60 years ago, in honor of the date: “The jubilation and the multitudinous concurrence of the working class today mean the beautiful reality of our island, the fact that Cubans wake jubilant with the first light of the dawn. All the factories begin the commemoration by whistling their sirens, and all the workers mobilize and prepare themselves to make this day more beautiful impactful as years gone by.”

Before the march was done, the photos taken by great Cuban photojournalists, such as Ismael Francisco, Irene Perez, Andy Jorge Blanco, began to circulate on social networks. They managed to immortalize the joy of a little children advancing through the sea of people on their father’s shoulders; the pride of a man carrying a Cuban flag on his chest, the emotion of Díaz-Canel and Raúl Castro, who watched the march a few meters from the José Martí monument.

The last time the Plaza de la Revolución was as crowded as today was on May 1, 2019. A few months after, everything changed for Cuba and the world. The 2020’s and 2021’s May Day were mark trough social medias as the COVID-19 desolated cities, emptied squares, and forced doctors to fight to save lives in hospitals and isolation centers.

This Sunday was different thanks to the Cuban scientific community and to our leaders’ efforts. 87.8 percent of the country’s population is immunized against the disease with our own vaccines. Their effectiveness is reflected in the low rates of contagion that the country registers, which made it possible for all of us to go to the Plaza as we do every May Day, even when this time we all wore face masks, something unprecedented.

Once again, the world looked at the parade held in Cuba for the International Workers’ Day in bewilderment that the Cuban people could come out once again in such a huge expression of unity, dispelling the myths that appear daily in the corporate media, especially what we see from the US.
Many Cuban friends and colleagues I spoke with said the march was larger than they expected after the long layoff. And many came out with homemade signs on card board. The main themes of the march were honoring Cuba’s health system, available equally to all, and the development of economic industries of all sizes and products.

Meanwhile, in other countries people took to the streets to express their discontent with the lack of labor laws to protect them from the greed of corporate bosses. But I must say the marches in Cuba seem more like a big party endorsing the plans of the socialist island nation. Over 200 organizations from 60 countries, including the US, participated in Cuba’s May
Day event.

Fidel’s words pronounced 60 years ago are still applicable: “What is happening today serves to define the policy of a country. In many nations workers are oppressed and are victims of the fiercest exploitation, and they cannot even gather on May Day.”

Indeed and during the seven years that our country lived under the Fulgencio Batista’s dictatorship, back in the 50s, workers were not allowed to go out on the streets on May Day; the working class had to commemorate this event secretly, in private meeting rooms.

Luckily, Cuba’s fortunes changed in 1959. Although we are immersed in a complex economic situation and an unprecedented international disinformation campaign, the island has shown today that it may have a long way to go but that it is willing to keep pushing for a better future, which is only possible by being united.