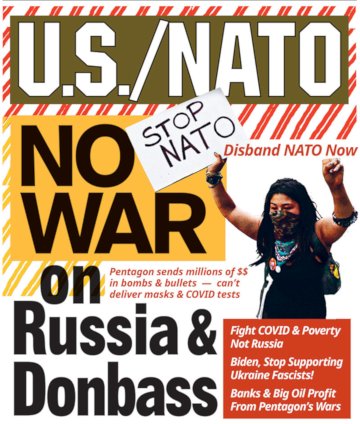 On Feb. 24, the anti-fascist Donetsk and Lugansk People’s Republics, together with the Russian Federation, launched a military action with the goal of “demilitarization and denazification” of the U.S.-NATO coup regime in Ukraine. It is in the interest of poor and working people, anti-war and anti-imperialist forces, especially in the U.S. and other NATO countries, to take a clear and unambiguous position in solidarity with the anti-fascist forces. The real war danger comes from U.S. and NATO forces surrounding Russia. The government in Kiev is a proxy of these forces of war, with no regard for the people of Ukraine.

For eight years, the people of Donetsk and Lugansk in the Donbass region have maintained their independence in the face of constant bombing, shooting and terrorist attacks by the Ukrainian government – a regime installed by a fascist coup orchestrated with bipartisan U.S. support. More than 14,000 people have died in Ukraine’s war on Donbass, according to the United Nations.

Since November 2021, the U.S. has pushed Kiev to launch a new murderous invasion of the Donbass, while claiming that the real threat was from Russia against Ukraine. Meanwhile, the U.S. and its NATO military allies poured weapons and “trainers” into Ukraine, and built up their own imperialist armies on Russia’s Western borders and throughout Eastern Europe. The U.S. rejected Moscow’s just demands to guarantee Ukraine’s neutrality and pull back NATO’s armies.

Russia officially recognized the independence of Lugansk and Donetsk on Feb. 21 – nearly eight years after the people of Donbass overwhelmingly chose independence in a democratic referendum, rejecting the rule of the pro-Western/neo-fascist coup government in Ukraine.

The response of the U.S. and its allies was to impose new sanctions on Russia – an act of war – and to send still more troops and weapons to threaten the independent countries of the region. This included blocking the Nord Stream II gas pipeline project between Russia and the European Union, a major goal of Big Oil and Wall Street banks.

Washington and NATO deliberately and methodically pushed the Donbass republics and Russia into a corner, from which there were only two options: submit or fight back.

On the night of Feb. 23-24, the People’s Militias of Donetsk and Lugansk and their Russian allies launched a military action with the goals of reclaiming Ukrainian-occupied areas of Donbass and demilitarizing and denazifying the Ukrainian-NATO regime.

The People’s Militias are fighting to drive back the Ukrainian Armed Forces, including neo-Nazi battalions armed and trained by the U.S., Canada and NATO, that constantly threaten the lives of their residents. U.S. white supremacists have trained with the Ukrainian fascist gangs, something even admitted by the FBI, and gained military experience fighting against Donbass which they bring back to attack oppressed communities here. They were key players in the “Unite the Right” rally in Charlottesville, Virginia., and the murder of anti-racist activist Heather Heyer.

The Russian armed forces have carried out attacks on at least 74 military bases throughout Ukraine, many of them constructed and upgraded by NATO specifically to facilitate war against Russia. Russian, Donbass and the Ukrainian anti-fascist underground are also working to locate, capture or eliminate neo-Nazi forces, including the ringleaders of the 2014 Odessa massacre, when at least 46 people were killed at the House of Trade Unions.

The anti-fascist military action, forced on Donbass and Russia by the Western imperialist powers – principally President Joe Biden and the U.S. government – has exposed confusion and equivocation in the U.S. anti-war movement, even among socialists and communists.

Let’s be clear: Modern capitalist Russia is not an imperialist country. It had no means to become one after the counterrevolution in the USSR. It is a regional power akin to India or Brazil, primarily an exporter of commodities, not capital. In order to maintain its independence, Russia had to ally itself with other countries in opposition to imperialism.

Ukraine’s coup regime, by contrast, is a pawn of U.S. imperialism that has been waging a brutal war on its neighbors in Donbass for eight years and offered itself as a base for NATO aggression against Russia.

We want to remind the movement of the principles laid down at the dawn of imperialism by V.I. Lenin, the leader of the Bolshevik Revolution. Differentiating the communist position from the pacifists, who condemn all wars equally, Lenin said, “We understand that wars cannot be abolished until classes are abolished and socialism is created.”

If Iran attacked Saudi Arabia to stop the genocidal U.S. war on Yemen (carried out by Saudi Arabia at Washington’s behest), which also threatens Iran and its regional allies, we hope that anti-imperialists would recognize that this was a just war, despite some of our ideological differences with the government of the Islamic Republic of Iran. Yet this is exactly what is happening in Ukraine today.

Our responsibility is to stop U.S. imperialism and its wars in all forms, and to stand in solidarity with those who fight against U.S. domination.

Victory to the Donetsk and Lugansk People’s Republics and their allies!

Solidarity with the anti-fascist underground and exiles of Ukraine!

U.S./NATO: Hands off Russia! Get out of Ukraine and Eastern Europe!