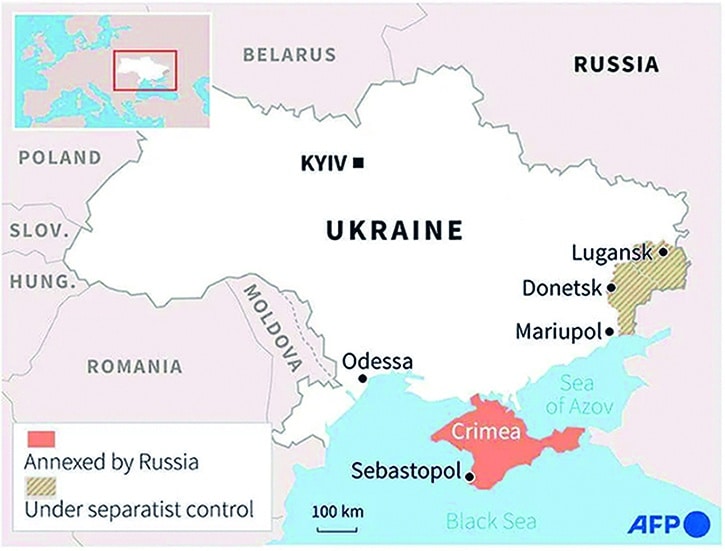 In order to have a clear anti-war, anti-imperialist position today, class-conscious workers need to understand the significance of the Russian Federation’s Feb. 21 decision to recognize the Donbass republics of Donetsk and Lugansk as independent, sovereign countries, nearly eight years after they first declared independence from Ukraine.

Following an unprecedented live telecast of the meeting of Russia’s National Security Council, President Vladimir Putin announced, “I deem it necessary to make a decision that should have been made a long time ago – to immediately recognise the independence and sovereignty of the Donetsk People’s Republic (DPR) and the Lugansk People’s Republic (LPR).”

Putin signed presidential decrees recognizing the republics; establishing treaties of friendship and mutual cooperation with them; and authorizing Russian peacekeepers to be deployed to the Donbass if requested. Reciprocal decrees were signed by the leaders of the DPR and LPR, Denis Pushilin and Leonid Pasechnik.

The U.S. and its global allies denounced the decision.

Russia’s decision came after several days of heightened Ukrainian military attacks on the two small republics. Two-thirds of Ukraine’s NATO-armed and -trained military forces are poised on the roughly 200-mile “line of contact” with Donetsk and Lugansk, near Russia. Some 175,000 NATO troops, meanwhile, are also stationed on Russia’s western border.

Hundreds of Ukrainian artillery attacks, shootings and terrorist acts have been carried out since Feb. 17, killing and wounding civilians and members of the Donbass People’s Militias, destroying homes and damaging vital infrastructure like water filitration plans, gas pipelines and schools.

Mass evacuations of civilians from Donetsk and Lugansk began Feb. 18. Everyone understood that a Ukrainian invasion was imminent, even though the Biden administration, standing reality on its head, kept repeating that Russia was planning to invade Ukraine.

Although the shelling of Donetsk, capital city of the DPR, subsided briefly after Russia’s announcement, Ukrainian attacks soon resumed, including a bomb attack on the Donetsk television center and the killing of two Lugansk civilians by a Ukrainian anti-tank missile Feb. 22.

Since November 2021, Washington has relentlessly pushed Ukraine to launch a major attack on the Donbass in hopes of drawing Russia into a conflict to justify further NATO expansion and shut down Russian fuel exports to Western Europe.

For three decades, the bipartisan goal of U.S. capitalism has been to break up Russia and bring it firmly under Washington’s control – something Putin acknowledged in his Feb. 21 address to the Russian people.

Perhaps most important, Germany announced Feb. 22 that it was stopping authorization of the newly completed Nord Stream 2 gas pipeline that was set to significantly increase the flow of fuel from Russia to the European Union.

Cutting off this relationship – forcing Europe to buy oil and gas products from U.S.-owned and -controlled sources, directing the profits into U.S. banks – was a major goal of Washingon’s anti-Russia campaign. On cue, oil and gas prices jumped to near-record levels, with oil close to $100 a barrel on Feb. 23.

Of all the NATO imperialists, Germany had most dragged its feet in supporting the U.S. war drive. But it’s important to recall that Germany, though the strongest economic power in Europe, is also militarily occupied by the Pentagon, with a whopping 119 U.S. military bases, second only to another imperialist frenemy, Japan with 120.

Russia’s recognition of the Donetsk and Lugansk republics was greeted with great enthusiasm by Donbass residents, who have lived under eight years of Ukrainian war and sanctions, at the cost of more than 14,000 lives. It was an important, if belated, acknowledgement of their democratic decision in the referendum of May 11, 2014 and the sacrifices they have made to fend off NATO/neo-Nazi encroachment.

They understand, as do the Ukrainian fascists that seek to “cleanse” the Donbass region, that further aggression by Kiev now means a military confrontation with Russia. Ukraine’s President Volodymyr Zelensky fears this, but as a willing tool of Washington has no power to resist.

At the same time, Russia had little choice but to take this step, which was forced upon it by Washington. For eight years, since the 2014 U.S.-backed coup in Kiev, Moscow has parried numerous Western attempts to draw Russian forces into a fight with Ukraine. But it has become apparent that room to maneuver has run out.

Among the Russian people there is massive support for the residents of Donbass. It’s doubtful that the Putin government could have survived the abandonment of Donetsk and Lugansk.

Putin’s televised address combined a clear-eyed assessment of the stakes of the current confrontation for Russia with an analysis of Ukrainian history severely distorted by anti-Sovietism and Russian nationalism. We must honestly acknowledge that this is an impediment to rebuilding solidarity between Russian and Ukrainian workers.

But the true significance of Russia’s decision to recognize the Donetsk and Lugansk People’s Republics goes in another direction. It’s an acknowledgement of the deeply rooted traditions of anti-fascism and internationalism of the multinational Soviet working class, even three decades after the socialist USSR was broken up.

Today as never before, the workers and oppressed of the U.S. and the world must reject the lies of Washington, Wall Street and the corporate media and demand: No war with Russia! Biden, recognize Donetsk and Lugansk! U.S. out of Ukraine!