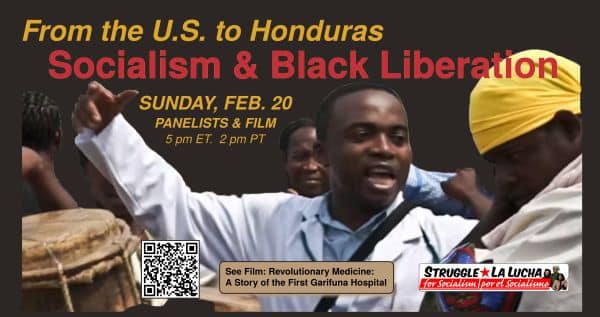 See the film “Revolutionary Medicine: A story of the First Garifuna Hospital”

Award winning documentary! “A moving true story of the courage of the Afro-Honduran community and Garifuna Dr. Luther Castillo who graduated from the ELAM medical school in Cuba”

It took only eight days for the newly elected administration of Xiomara Castro and the Libre Party to make changes that impact poverty and racism in Honduras. One million people had electricity bills cut, tuition for schools ended, and Afro-Hondurans made gains in hiring by the new government.

John Parker is a founder of the  Harriet Tubman Center for Social Justice and the Socialist Unity Party. He was part of an international delegation that attended the inauguration of President Xiomara Castro.. Parker will speak on the present, and historic role socialism has played in the liberation of Black/African peoples here in the U.S. and abroad.

Berta Joubert is a founding member of Women in Struggle/Mujeres En Lucha. Joubert lives in Puerto Rico and is a writer for Struggle La Lucha.  They were also a part of the international delegation at the inauguration of Honduran President Xiomara Castro.

Hernan Amador is a member of the  Libre Party of Xiomara Castro, who was part of the delegation. He lives in Costa Rica and will talk about the African ethnicities, including the Garifuna people in Honduras. In addition, Amador will discuss how conditions for Afro-Hondurans have changed since the U.S. supported the 2009 coup that unseated socialist and elected President Manuel Zelaya.