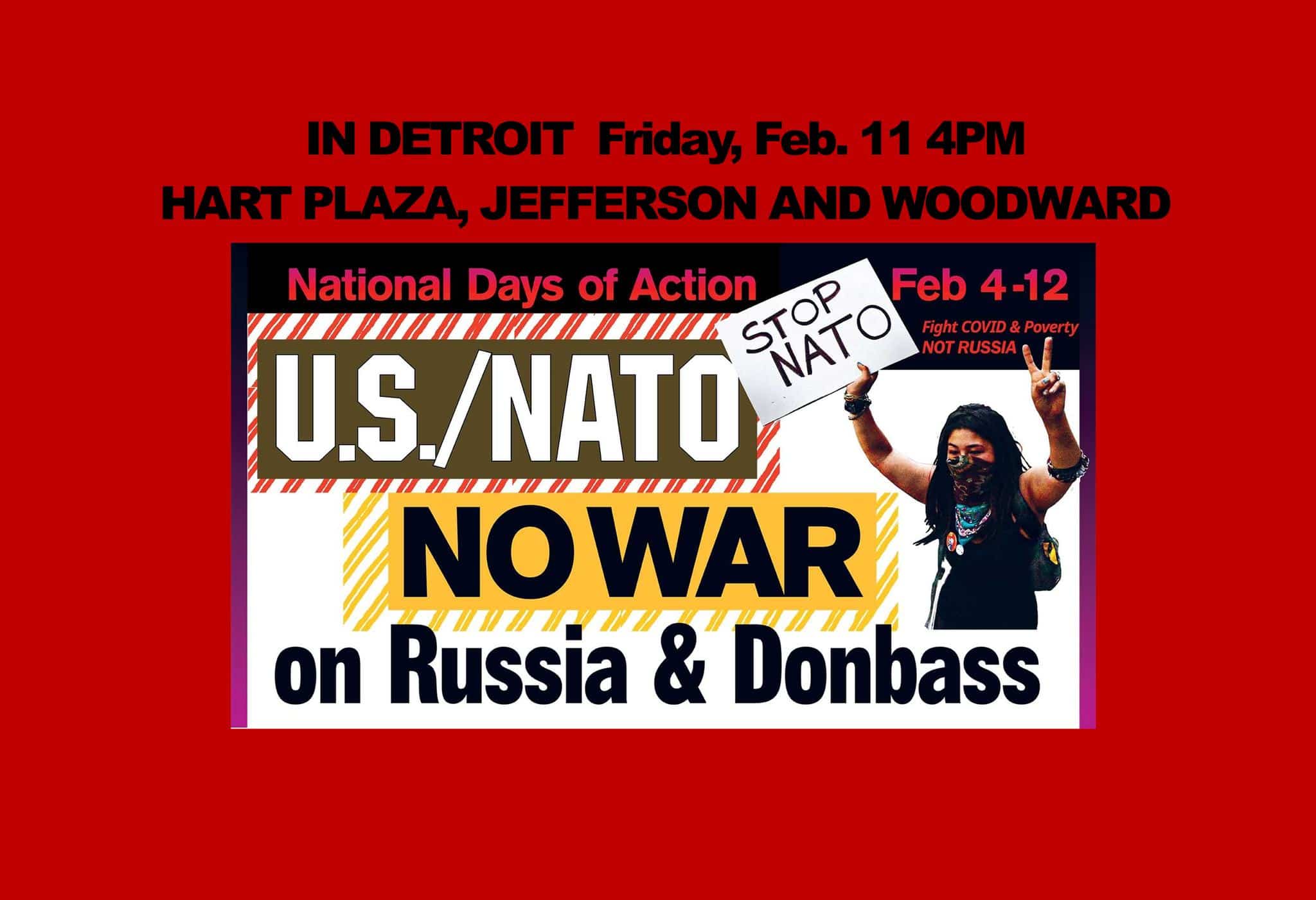 Moratorium NOW! Coalition and the Michigan Emergency Committee Against War & Injustice join the national call for actions against the threat of war.

From the national call:
We call for antiwar, workers’ and people’s organizations across the U.S. to hold rallies, pickets, mass leafleting, banner drops and other activities from Feb. 4-12. We must act now to stop another war before it starts.

No war with Russia and Donbass!

No new deployment of U.S. troops – bring all the troops home!

To endorse, email: solidarityukraineantifa@gmail.com
—————-
The Biden administration has put 8,500 U.S. troops on standby for deployment, on top of 64,000 already stationed in Europe. Millions of dollars in U.S. “lethal aid” (weapons) is arriving daily in Ukraine. Biden claims that there is an imminent threat of a Russian invasion. But the real invasion threat stems from U.S.-allied Ukraine against the independent Donbass republics of Donetsk and Lugansk, near Russia’s western border.

Washington and its NATO partners have been pushing Ukraine’s government to invade Donbass, hoping to provoke a response from Russia that can cover further NATO expansion. Ukraine has deployed 125,000 troops to the ceasefire zone, including battalions of neo-Nazis, armed with NATO weapons. Donbass residents have already suffered eight years of Ukrainian war and Western blockade. More than 14,000 people have perished in that conflict.

Despite a U.S. promise not to expand NATO eastward at the end of the Cold War, the alliance has added 14 members since. Russia has made it clear that a NATO takeover of Ukraine – the largest country on its European border – is an unacceptable threat to its national security. Biden has continued Trump’s war drive worldwide, from Yemen to Syria, Venezuela to Palestine, Iraq to the South China Sea.

Why is Washington provoking Russia? The U.S. under both Democrats and Republicans has long sought to dominate and plunder the entire former Soviet Union economically, politically and militarily. Today U.S. Big Oil companies and banks urgently want to stop the flow of Russian gas and oil to Western Europe, including the new NordStream2 pipeline, so U.S. allies will be forced to buy from them. Biden, who has betrayed the urgent needs of workers and oppressed communities that elected him, is desperate to funnel people’s anger at a foreign enemy.

We say no! Poor and working people are wracked with crisis after crisis here at home: rampant spread of COVID; deliberate dismantling of public health measures to control the pandemic; wages slashed by inflation; capitalism’s climate destruction intensifying; the end of eviction moratoriums; racist police terror; bans on anti-racist education in schools; far-right attacks from the streets to the Supreme Court on people’s basic democratic rights.

We need a struggle to end racism and poverty at home, not another criminal war abroad!