The corporate media and politicians claim that Russia is about to invade Ukraine. It’s a big lie, just like the lie about Iraq’s “Weapons of Mass Destruction.” Actually, Washington is pushing U.S.-armed Ukraine to invade two small independent republics, Donetsk and Lugansk, on Russia’s border. They want to provoke a response from Russia to justify NATO intervention.

Workers are facing crises right here at home. Why is Biden preparing to send 8,500 additional U.S. troops to Europe on top of 64,000 already stationed there? Why did Congress raise Pentagon war funding when they can’t even pass Build Back Better legislation or protect people’s basic democratic rights, like the right to vote and reproductive rights?

Millions of $$ in bombs and bullets, can’t deliver masks and tests

Between Jan. 21 and Feb. 1, the U.S. delivered 500 tons of weapons and military supplies to Ukraine. Yet many people have still not received their four free home COVID tests in the mail. Pharmacies have signs saying, “Free gov’t masks not yet available.” Imagine if Washington put the same effort into fighting the COVID pandemic and providing healthcare. How many of the nearly 1 million U.S. lives lost could have been saved?

Ukraine has sent white supremacists and neo-Nazis to the front line to threaten Russia and the residents of Donetsk and Lugansk. Biden went back on his promise to curb racist police violence against Black and Brown communities. Meanwhile the Pentagon is training and arming Ukraine’s hate groups, who are no different than those who attacked the Capitol last Jan. 6.

U.S. Big Oil companies and banks want to stop the flow of Russian oil and gas to Western Europe. They want to force their European allies to pay extortionate prices for U.S. fuel instead. We don’t need another bloody war for oil profits! 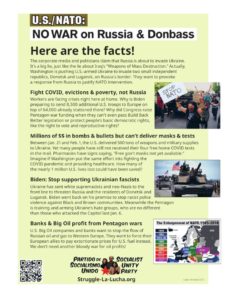