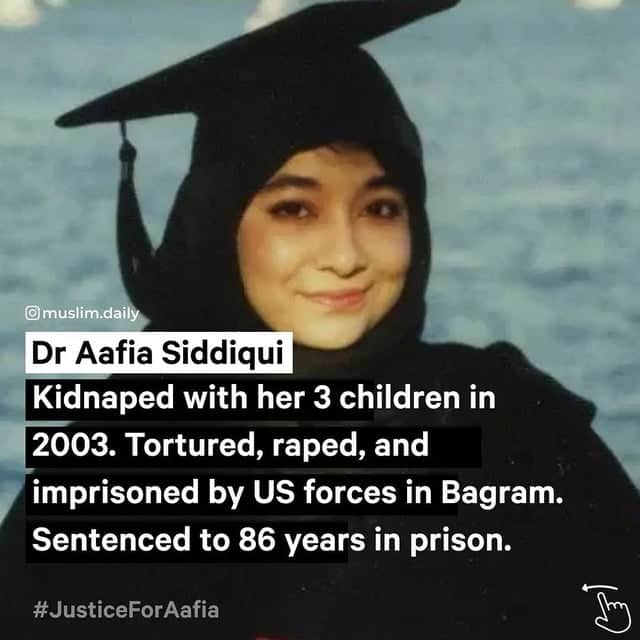 According to his family in England he has “mental health issues.” He was “said to have” weapons and explosives. He was “said to have” threatened the four hostages but everyone seems to agree no one was harmed. He wanted Siddiqui free from the near-by maximum security Carswell Prison; he wanted to speak to her. Under heavy criticism the FBI has said that his hostage-taking had nothing to do with their being Jews, “not his issue.” But to the press, Siddiqui “has a history of anti-Semitism,” hence the universal media criticism. To the police, FBI, government, killing Akram represented a successful outcome to the crisis.

Siddiqui’s lawyer and family distanced themselves from Akram’s actions, but to say they remain completely frustrated by their thwarted attempts to free a very ill, frail, and innocent Aafia Siddiqui, after repeated pleas to the U.S. government and unfulfilled promises by the Pakistani government, would be to vastly understate the case.

Pakistani-born Boston graduate student Aafia Siddiqui’s crime was to be caught in America’s post 9/11 anti-Muslim hysteria. She had come to America in 1990 to study, earning a biology degree and then a Ph.D in neuroscience from MIT. Her colleagues called her quiet and religious (but not a fundamentalist).

Her marriage to Mohammed Amjad Khan ended in divorce when he proved to be violent and more fundamentalist than Siddiqui. She was mistakenly accused of anti-American Muslim activism initially (partially because of mistaken identity), but the accusations ballooned. In the early War On Terror days, “associations” became much more significant and damning.

Once the government labeled her a “terrorist,” she had no chance of escaping the Empire’s punishment. When her true story began to emerge, it was necessary to take action. While visiting in Pakistan, helped by Pakistani-American operatives, she was “disappeared.” Her youngest child was killed when she was taken, and her other two children imprisoned separately for years. She was beaten, raped, tortured and kept in solitary in black-site prisons of the American Empire, particularly in Afghanistan. Other prisoners have testified that they saw her at Bagram, a prison from which the Obama administration prevented prisoners’ court appearances because they might talk about the conditions of their imprisonment. Eventually Aafia Siddiqui would be set up for final punishment and disposal.

From my book Women Politicals in America:

At the trial—in January 2010—the soldiers said that Aafia Siddiqui, accused would-be assassin and presumed Al Qaeda terrorist, did, in fact, get hold of an unsecured M-4 automatic rifle and open fire on U.S. soldiers and FBI agents in Ghazni, Afghanistan. The day before, she had been picked up by local policemen as a “possible suicide bomber” because she had been “loitering” in a public square with a young boy [whose identity is not clear]. She carried instructions to create biological weapons, descriptions of U.S. “military assets,” numerous jars containing “chemical substances,” and documents containing words like “Empire State Building” and “Brooklyn Bridge.” The soldiers said that the day after her discovery and arrest, an American army captain, a warrant officer, two army interpreters and two FBI agents came to question Siddiqui at Ghazni police headquarters. The soldiers said that none of those men were “aware that Siddiqui was being held, unsecured, behind [a] curtain.” Oddly, no one looked behind it. And also oddly, the American warrant officer placed his M-4 rifle next to the curtain. What happened next, said the soldiers, was that Siddiqui pulled the rifle to her, unlatched the safety, pointed the gun at the captain, and while one of the interpreters grabbed for the gun, Siddiqui fired the gun twice. The soldiers agreed she had said, “Get the fuck out of here!” She hit no one.

The soldiers said the interpreter knocked her to the ground and the warrant officer fired “approximately two rounds” into Siddiqui’s stomach. She collapsed, unconscious. FBI special Agent Eric Negron testified at her trial that he saw the rifle raised (although he could not see her face behind the curtain). Negron said that after she was shot he helped restrain the struggling Siddiqui. “I had to strike her several times with a closed fist across the face.” Finally she “either fainted or faked that she had fainted” and was handcuffed. The soldiers had successfully restrained the suspected terrorist Siddiqui. Although her prints were not on the rifle, the holes in the police station wall put there by the rifle Siddiqui allegedly fired were proved to have been there before the July 2008 incident, and since, if she had tried to kill the soldiers, she missed and was herself grievously shot in the abdomen, her sentence seemed disproportionate. Aafia Siddiqui was given 86 years in prison. She had been labeled a terrorist enemy of the Empire and its soldiers, and her case was disposed of accordingly.

Siddiqui had been extradited for the offense of attempting to kill soldiers, but she was tried, completely illegally, as a notorious female terrorist. She was not allowed to speak of her torture or the killing of her baby. The trial — then as now — of a “terrorist, as with Julian Assange, allows for only the government/prosecutorial side. The defendant cannot win. Siddiqui was also in very bad shape, physically and mentally during her trial, with a badly dressed stomach wound that the judge had to intervene to have treated. She was forced to undergo strip searches every day and was forced to testify. When she mentioned being in a secret prison, with her children tortured in front of her, the testimony was stricken from the record. She also, and this is arguably something the hostage-taker Malik Faisad Akram was aware of, did not want “Zionists” chosen as jurors and said her guilty verdict came from Israel, not America. Some said she was irrational which was entirely possible, but with the anti-Muslim elements of her trial, perhaps not so irrational.

She has been in prison since 2010 and has, according to her family, suffered unjust punishments within the prison, and her medical problems are not treated. For much of the last 11 years, she has also not been able to communicate with her family. According to the Free Aafia website, maintained by her family and friends, she was attacked last July and suffered serious injuries. After a number of years, she and her family are still waiting for Pakistani Prime Minister Imran Khan to follow through on promises to help free her from the Empire’s prison. For the press to continue to call her a hardened terrorist and to overlook the treatment, the torture she has endured at American hands, echoes the ignorant liberal sentiment that Afghanistan is so much worse off without the American government there to torture and kill. I would like to end this with a 2012 statement from Moazzam Begg, prisoner at U.S. Air Force Base, Bagram, Afghanistan:

Of all the abuses [prisoner Abu Yahya al-Libi] describes in his account, the presence of a woman and her humiliation and degradation were the most inflammatory to all the prisoners [at Bagram]—they would never forget it. He describes how she was regularly stripped naked and manhandled by guards, and how she used to scream incessantly in isolation for two years. He said prisoners protested her treatment, going on hunger strike, feeling ashamed they could do nothing to help. He described her in detail: a Pakistani mother—torn away from her children—in her mid-thirties, who had begun to lose her mind. Her number, he said, was 650.

Linda Ford is a retired history professor, living in Madison, NY.  She is the author of Iron-Jawed Angels: The Suffrage Militancy of the National Woman’s Party, and Women Politicals:  From Mother Jones to Lynne Stewart.