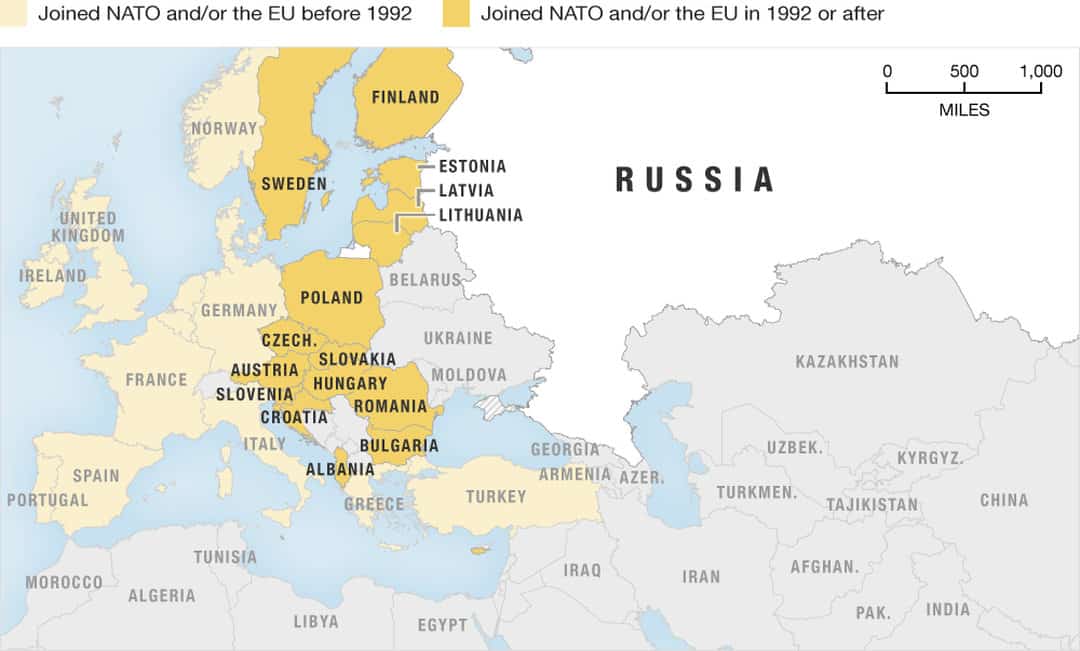 Why is President Joe Biden’s administration laser-focused on threatening war on the other side of the world, when the people of the United States are beset with life-threatening crises here at home?

Racist killer Kyle Rittenhouse was just acquitted, emboldening violent white supremacists across the U.S. Women’s reproductive rights are under attack in many states and at the highest summit of the Supreme Court, which may soon overturn Roe v. Wade.

The COVID-19 pandemic is surging again, with the Delta and Omicron variants threatening new waves of death and further taxing the country’s awful, mismanaged private healthcare system. Workers’ rights are under attack from Amazon, Kellogg’s and bosses across the board. The climate crisis continues to wreak havoc coast-to-coast.

These are a few of the life-and-death problems Biden needs to address. Workers and oppressed people did not give him their votes to start a war with Russia.

Biden’s administration claims that 70,000 Russian troops guarding their country’s Western border are a great threat to neighboring Ukraine. Seventy thousand Russian troops, that is, stationed on Russia’s own territory.

On Dec. 3, Jeff Bezos’ Washington Post, long an unofficial Pentagon mouthpiece, promoted a “declassified assessment” by national security officials claiming that Russia plans to invade Ukraine with 175,000 troops by the end of January.

This is at least the third time this year that Ukrainian and Western officials have made such a claim about an alleged Russian invasion. What sets this time apart is that the story started in Washington, not Kiev.

Last spring, NATO held its largest-ever war games in Europe, in regions bordering Russia, acting out scenarios that are now being promoted on computer and TV screens around the world.

The U.S. military has at least 750 military bases in 80 countries and hundreds of thousands of personnel stationed around the world. The U.S. spends more on its military than the next 10 countries combined. The Pentagon kills with impunity whenever and wherever it claims to see a threat to “U.S. national security” – whether in Africa or Western Asia or Latin America – destabilizing countries, often taking civilian lives intentionally or as “collateral damage.”

Over the last 30 years, the U.S.-dominated NATO military alliance has steadily expanded eastward, swallowing 14 countries in Central and Eastern Europe, including several on Russia’s Western borders. This despite a promise by the U.S. to Russia that NATO would not expand after the Cold War.

Ukraine is among three countries in the running to join NATO next. The U.S. first promised Ukraine NATO membership in 2008 if its government would join the anti-Russia crusade. Russia has made it clear that a NATO takeover of Ukraine is a “red line” that threatens its sovereignty and security which must not be crossed.

Biden’s spokespersons don’t mention that up to 125,000 Ukrainian troops – half its total military! – are massed on the borders of the independent Donetsk and Lugansk People’s Republics, small countries sandwiched between Ukraine and Russia. Ukraine has been at war with them since 2014.

Ukraine claims these countries as its own territory, despite an overwhelming popular vote in a democratic referendum in favor of independence.

Ukraine is a party to the internationally-negotiated Minsk II agreements, which prohibit it from targeting civilians, using heavy weapons against the Donetsk and Lugansk republics or invading. Yet Ukraine shells and shoots at the 140,000 inhabitants of frontline areas constantly, causing daily deaths, injury and destruction. Washington and Kiev deliberately block any progress toward a negotiated settlement.

Ukraine’s war on the Donbass republics has gone on for seven and a half years, and has cost more than 14,000 lives.

The real danger of invasion is from Ukraine against Donetsk and Lugansk. Since 2014, Ukraine’s military has been trained, armed and reorganized by the U.S., Britain, Canada and other NATO countries. That includes the neo-Nazi “volunteer battalions” integrated into its official military structure.

The people of Donbass suffer under a complete economic blockade by Ukraine and its Western allies. Russia has provided humanitarian aid and trade to Donetsk and Lugansk at great cost, supplemented by support from antifascist organizations in the former Soviet countries and the rest of the world.

A Ukrainian invasion of Donetsk and Lugansk would aim for maximum damage to infrastructure and civilian casualties – in hopes of provoking a military response from Russia. Then NATO would claim a “Russian invasion” to justify its war moves.

Why did people in eastern Ukraine’s Donbass mining region choose independence? It happened after a U.S.-engineered coup brought a far-right-wing government to power in Kiev in 2014.

The coup was carried out by fascist gangs that were then set loose on the people of Donetsk and Lugansk and integrated into Ukraine’s military and security forces.

The U.S. wanted to bring NATO to Russia’s border then and there. Most of all, Washington wanted to seize the strategic military base on the Crimean peninsula, which would give NATO control of the Black Sea. The people of Crimea rejected that. So did the Russian government.

In Soviet times, Russia ceded Crimea to Ukraine, with a long-term Russian lease on the military base. In 2014, the Crimean people voted to return to Russia, and Russia agreed, thwarting the U.S. takeover of this strategic area.

Over 26 million Soviet people died fighting the Nazis in World War II. Seventy years later, they were not willing to live under neo-Nazi rule.

All of this happened during the Democratic Obama administration. Both Democrats and Republicans supported the far-right takeover of Ukraine and lied about a “Russian invasion” when the people of Donbass and Crimea asserted their right to separate.

And who was the Obama administration’s point person on Ukraine? Who was calling the shots and handing out profitable favors to family members and business associates?

It was none other than Vice President Joe Biden.

Putin reiterated the Russian government’s consistent position that NATO expansion into Ukraine is a “red line” for Russia’s security. He said he hoped for further negotiations.

Why is Washington taking such a provocative stance toward Russia and making these threats now?

Big U.S. energy companies and banks want to stop the international Nord Stream II project that is set to bring Russian natural gas to Western Europe. U.S. capitalists are desperate to control energy profits and suppress any energy-supplying countries that defy Wall Street control – like Iran, Venezuela and Russia. U.S. companies want their European junior partners to buy energy from them and them alone.

That’s the immediate play. But the U.S. has had its eyes on carving up the Russian Federation since the fall of the Soviet Union 30 years ago. A Pentagon document leaked in 1992 laid out a long-term plan to rip apart Russia, destroy its sovereignty and make it a docile market and supplier of raw materials and skilled labor for Western big business. That’s still the goal.

And then there’s the fact that Biden and the Democrats are deeply mired in political crisis at home – unable to meet the basic needs and demands of the workers and oppressed people who they claim to represent, because they are beholden to the very capitalist system that thrives on racism, poverty and war.

Provoking a war is a time-honored U.S. method of distracting the masses of people in a time of great crisis.

Belarus, then Ukraine, next … ?

The U.S. “warnings” (really, war propaganda) about a Russian invasion of Ukraine followed immediately on the heels of the November border crisis between Belarus and Poland.

Thousands of refugees from Western and Central Asia and North Africa, fleeing the wreckage of U.S.-European wars in their homelands, went to Belarus, seeking to enter the European Union through Poland. The U.S.-dominated Polish government refused to let them through. The EU countries supported Poland in this gross violation of international human rights.

Polish troops mobilized at the border and abused refugees. The right-wing regimes in Lithuania and Ukraine also sent troops to the border with Belarus. None of this could have happened without NATO’s (and therefore, Washington’s) express consent and encouragement.

Belarus is an ally of Russia. The countries recently strengthened their military ties after an attempted Ukraine-style coup failed in Belarus. The events on the Polish border had all the earmarks of NATO trying to provoke a war crisis.

The EU countries refused to even hold a conversation about the refugees. Finally, Belarus President Alexander Lukashenko put his foot down. He said that if Poland and its allies provoked a war, Belarus would stop the flow of fuel oil to Western Europe.

That got a quick response. Angela Merkel, the German chancellor whose term has just ended, got on the phone to Lukashenko and agreed to cool things down.

Washington wasn’t happy with that outcome. And it immediately switched gears to the “Russian invasion of Ukraine” fairy tale – even though Ukraine had just made threatening moves toward Belarus on NATO’s behalf!

A day before the Biden-Putin call, an unnamed U.S. official told The Guardian that Washington could send troops to eastern Europe. “It would certainly be the case that if Putin moved in, there would be an increasing request from eastern flank allies, and a positive response from the United States, for additional forces and capabilities and exercises to take place there to ensure the safety and security of our eastern flank allies in the face of that kind of aggression in Ukraine.”

This threat didn’t come up explicitly during the official conversation, but hung over it.

Then, shortly after the presidential call, CNN filed a report that preparations were underway at the Pentagon for a possible evacuation of U.S. civilians from Ukraine in the event of war.

These stories aren’t objective journalism. They are thinly veiled and very public threats.

If the situation at the Ukraine-Russia border cools, it will only be temporary.

That’s the real message behind NATO’s one-two punch in Belarus and Ukraine. The antiwar movement, anti-imperialists and the whole working class must stay alert and get ready to stop a war that could quickly expand to engulf the whole world.

The U.S. keeps pushing harder and harder. Officials in Russia, Belarus and Donbass have so far managed to skillfully deflect and blunt NATO provocations. But Washington does not let up.

And whatever Biden, the Pentagon generals and big capitalists behind them desire at this moment, they are playing with fire. The Ukrainian, Polish and Baltic fascists are just as volatile as the white supremacist who killed two Black Lives protesters and wounded another in Kenosha. And they are far better trained and armed than Rittenhouse – thanks to Washington.

There are no guarantees that they will continue to follow their bosses’ orders if they grow impatient. And that could set off an international conflagration with tragic consequences for workers all over the world.

Now is the time to organize, educate and get ready to take the streets against the next U.S. war – whether it begins in Europe, Asia, Latin America or Africa.