This follows Gantz and the Israeli regime’s designation of Samidoun as a “terrorist” organization on 21 February 2021. In late August 2021, without issuing a press release, Gantz also designated EuroPal Forum, the International Legal Coalition for Palestine and the Popular Conference of Palestinians Abroad. It is clear that the Israeli regime has fully adopted as standard practice and policy the “terrorist” designation of organizations that effectively challenge its control and expose its crimes on the local, regional and international levels.

All of these designations are meant primarily as an attack on Palestinian organizing, research, agriculture, and the Palestinian prisoners’ movement. We express our full solidarity with all of the organizations designated in this manner and once again affirm that we will not be silenced or deterred by Israeli smear campaigns or attempted collective terror against Palestinians, Arabs and internationals struggling for justice. This repression must inspire us to organize more and build greater mutual defense and solidarity against all attempts to use the “terrorist” label to criminalize Palestinian resistance, action and organizing.

Once again, the Israeli designations appear to essentially be copied-and-pasted from right-wing propaganda organizations like NGO Monitor that aim to shield Israel from international accountability by smearing and attacking Palestinian human rights defenders. Their shoddy reporting, baseless claims and factual inaccuracies are part and parcel of their attempt to defend Israeli colonialism, military occupation, apartheid, siege and mass arbitrary detention of Palestine and the Palestinian people. These types of propaganda organizations have done so by attempting to prevent Palestinian non-governmental organizations from receiving grants; for example, the Union of Agricultural Work Committees has faced such attacks from these organizations in Australia, the Netherlands, and elsewhere.

Such “terrorist” designations can be used as a justification for arresting members, closing down organizations and centers or labeling the organizations “illegal” inside the occupied West Bank. In our experience with this designation since February of this year, these designations are used as ammunition by Zionist “lawfare” groups in various countries in an attempt to create a climate of fear to undermine collective solidarity, cut off funding or access to banking, and silence advocates for justice, rights and liberation in Palestine at international venues. 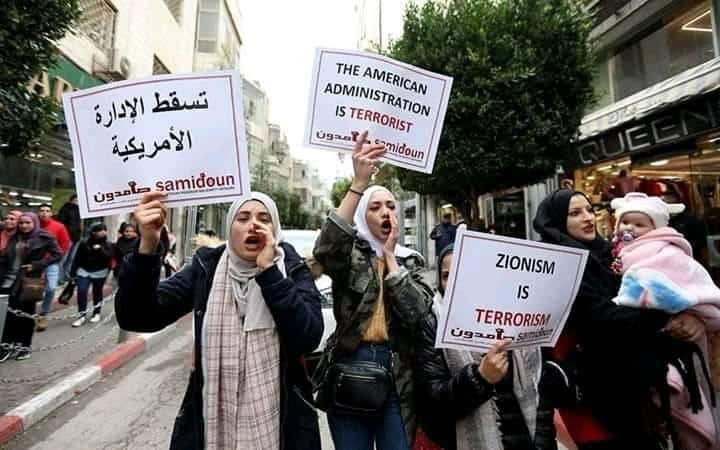 Through these designations, Israel has made clear that its definition of “terrorism” is any action that resists its colonialism throughout occupied Palestine. In many cases, such as with today’s designations of Addameer and DCI Palestine, as well as the existing designation of Samidoun, it is clear that this is an attempt to cut off Palestinian political prisoners — including imprisoned children — from growing legal, political and moral support and to attack the Palestinian prisoners’ movement. In the case of organizations like Al-Haq, it is clear that Israel wants to use the “terror” designation to provide itself with impunity from international prosecution, while the designations of organizations like Bisan, UPWC and UAWC aim to undermine and target Palestinian self-organization, research, and food sovereignty.

When Ben & Jerry’s ice cream brand announced that it would simply no longer sell ice cream in the future to illegal colonial settlements following an extensive campaign by social justice and Palestinian rights organizations, Israeli president Isaac Herzog labeled even this attempt of a company to come in line with international law — and all boycotts of Israel — as “terrorist.”

While this example is rhetorical, it indicates just how meaningless the term “terrorist” is in the hands of the Israeli regime. It means precisely any organization, activist, or freedom fighter that challenges Zionist colonialism through any method or means of resistance at all. The flurry of “terrorist” designations for organizations working to expose Israel’s crimes and organize Palestinians underlines this reality.

It further highlights exactly why all such designations should be considered propaganda stunts and tossed out by courts, governments, financial institutions and any other party called upon to repress Palestinian organizing on the basis of these bogus labels.  Such designations have no international effect and do not require anyone to stop supporting these organizations. Instead, these designations must mobilize us to build greater popular support for Palestinian rights organizations designated by the Israeli occupation.

Further, such designations should also inspire international advocates for Palestine and organizations concerned with justice and human rights to adopt the boycott and international isolation of Israel, which has once again — as it has for over 73 years — shown itself to be dedicated to the expulsion and suppression of the Palestinian people with complete disregard for any principles of law or justice.

As we noted in February, these designations are also an attempt to divert attention from the serious problem facing hundreds of Zionist officials – including Gantz himself – who are afraid from the next steps of the investigations by the International Criminal Court (ICC) after its last announcement on 5 February 2021 affirming that it has the authority to investigate war crimes in the Palestinian occupied territories.

We express our firm commitment to mutual defense and collective solidarity with all similarly targeted organizations working for a liberated Palestine. The primary way that we can confront these designations is by intensifying our organizing, action, mobilization and resistance to bring down the structures of colonialism, implement the right to return for Palestinian refugees, and support the liberation of all Palestinian prisoners and of Palestine, from the river to the sea.

We invite all who want to get involved in building this collective solidarity to get involved with our work at Samidoun. Click here to donate to support our work. To find out about becoming a member or building a chapter in your area, email us today at samidoun@samidoun.net