Who/What: Progressive organizations and activists in solidarity with Haitian refugees facing life-threatening conditions and brutal racist terror by U.S. policies and Klan-like border patrol agents will be holding protests around the country demanding the Biden Administration end those policies and State terror at the border.

Under the direction of the Biden Administration, Border Patrol agents – as if playing in a movie scene from Roots or 12-Years-A-Slave, and bringing to life some of the worst atrocities during the Antebellum South – have been caught on video whipping Haitian refugees while invoking Donald Trump’s words about their country being a “sh..hole country.”

You would think that this shocking display of white supremacy and criminal racism would bring at least a defensive reaction from the Biden Administration – but no serious condemnation nor prosecution, nor firings have occurred. And, President Biden and Vice President Kamala Harris maintain a deafening silence. This means that the horror the world has witnessed will continue, and possibly escalate, if no response is felt from the people of this country and the world condemning such actions.

What we’ve witnessed is part of the racist immigration policies from both the Democratic and Republican Administrations and in this particular case reflects the rarely used public health law, Title 42, enacted by former President Donald Trump. Trump attempted to use the law to justify his administration’s desire to end the basic international human right of seeking legal asylum under the cover of the pandemic. Biden, who pledged a more humane immigration policy during his election campaign is now fighting to keep the policy alive, also using the excuse of the pandemic while many physicians and immigrant organizations have countered this argument. Creating safety protocols and vaccinations at the border would be far easier and cheaper than further militarizing the border and flying hundreds of Haitians back to Haiti on a daily basis, which is being done today.

As with all refugees and migrants coming from the Americas to the U.S., they are escaping conditions in their countries created by the economic and militarized warfare of the U.S. — ensuring agricultural and political dominance to maintain the profits of multinational corporations here. And, in the case of Haiti, the colonial relationship of economic sabotage and denial of any real democratic process continues from 1915 — when the first US occupation and massacre of Haitians began — to now. In fact, the Haitian refugees coming today are escaping the devastation of an earthquake in a country with little emergency safety and health infrastructure and political turmoil from a recent presidential assassination that, either indirectly or directly, resulted from U.S. influence.

The Haitian people have a proud history of helping to bring about an ending to colonialism in Latin America with their military and political assistance to liberators like Simon Bolivar. Their first constitution, after inspiring slaves all over the world in 1804 by defeating Napoleon and becoming the first successful slave revolution, was copied throughout Latin America as an exemplary example of democracy. And, the Haitian war of liberation against the French helped secure vital territory for the ruling class of the U.S. in the 1800s. So, the Haitians are owed.

Instead of deportations and denial of their humanity, the U.S. should immediately end its violations of international human rights and end the selectively brutal racism in regards to African peoples, including the treatment of Haitian people with the denial of their history of great political and economic contributions to the Americas.

*All actions are encouraged to adhere to safety protocols of masks and social distancing. 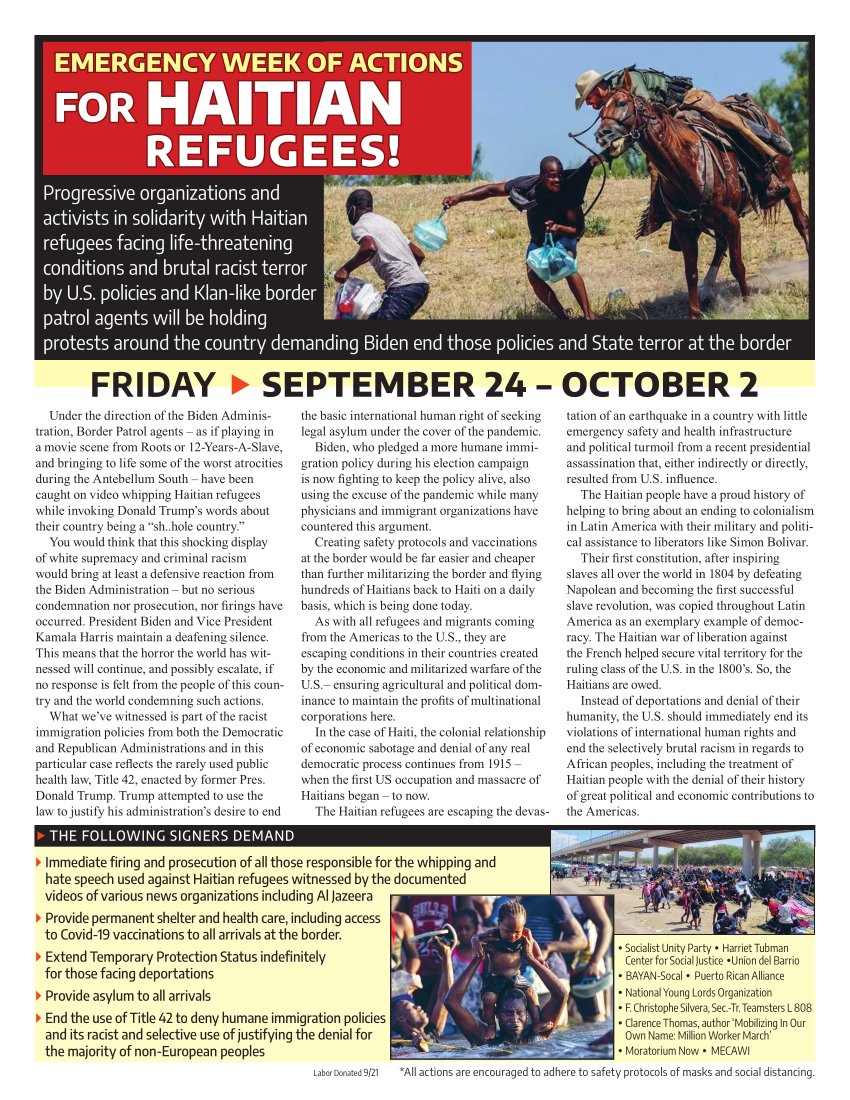