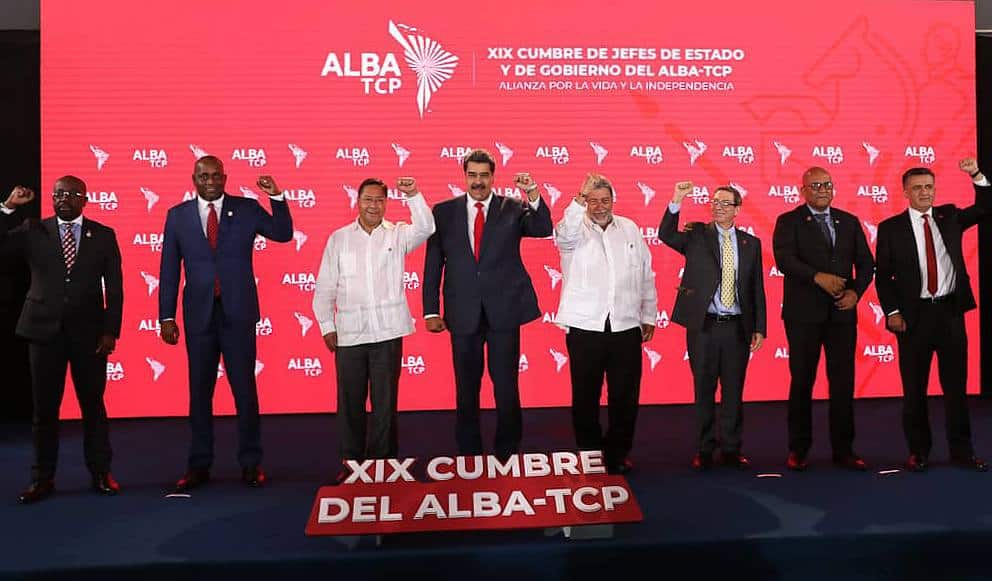 The Executive Secretary of the Bolivarian Alliance for the Peoples of Our America-Peoples’ Trade Treaty (ALBA-TCP), Sacha Llorenti, read the Final Declaration of the 19th Summit of Heads of State and Government, repudiating the aggressive and coercive measures exercised by the United States and Europe, advocating for a fair distribution of vaccines and medical supplies to combat COVID-19, and supporting and promoting respect for the sovereignty and the unity processes of the countries that make up ALBA-TCP, among other issues.

The document was put to a vote and was approved by the delegations present. Llorenti also reported on the approval of three issues on the agenda:

Below is the unofficial translation of the Final Declaration of the 19th ALBA-TCP Summit:

The Heads of State and Government and the heads of delegations of the member countries of the Bolivarian Alliance for the Peoples of Our America-Peoples’ Trade Treaty, meeting in person on June 24, 2021, within the framework of the commemoration of the bicentennial of the Battle of Carabobo in the Bolivarian Republic of Venezuela, by signing this declaration, renew our commitment to strengthening the integration and unity of our peoples as the founding ideology of Commanders Hugo Chávez and Fidel Castro Ruz; we vindicate the ideology of Bolívar, Martí, San Martín, Sucre, O’Higgins, Pétion, Morazán, Sandino, Túpac Katari, Bartolina Sisa and other heroes of Latin American and Caribbean independence, symbols of historical and cultural union of the struggle of our Indigenous peoples and the preservation of the most precious asset of freedom; we recognize the historical significance of the Battle of Carabobo, a milestone that seals the independence of Venezuela under the leadership of the Liberator Simón Bolívar, a struggle in which the combative character of the Venezuelan people was forged in defense of their right to self-determination, moral heritage and the values ​​of freedom, which have transcended Latin America, the Caribbean and the world.